Posted on 4th November 2016 by Nick Verdier in Young Gun 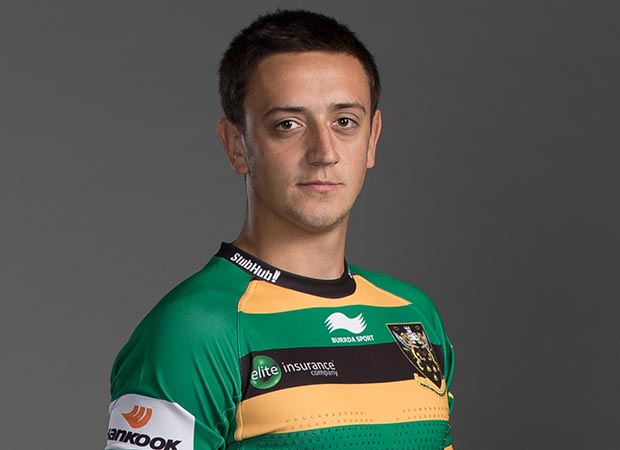 A knee injury prevented him from playing in a home World Cup, but Alex Mitchell is back and desperate to put on the England U20s jersey this season.

The Northampton scrum-half was named in the initial EPS squad at the start of the year but he picked an injury playing for the Saints academy and was forced to undergo surgery.

After eight months on the sidelines, he made his return to action two weeks ago for the Wanderers against Wasps in the A-League and was subsequently named by Martin Haag in the England U20s squad for this season.

The squad met up for their first training camp of the season in Loughborough this week and Mitchell reveals there is already a buzz about defending their World Cup trophy in Georgia in June.

“I watched the Six Nations and the World Cup and it was very frustrating especially the JWC as it was in my home town of Manchester,” he told The Rugby Paper. “I’ve only been back playing for three weeks but I’m desperate to have another shot with England.

“The A-League could be good for me to get some game time and maybe try to get out on loan after that. But it’s early days still and I haven’t spoken to the coaches too much about that just yet.

“The camp this week has been good and it was nice to be back with the lads ahead of the season. We’ve got another camp in December and then one in January before the Six Nations.

“We’ve got a lot to live up to and the JWC is a fair while away but we’re keen to improve from last year and maintain the reputation of England U20s. Hopefully we can win the Six Nations and take it from there.”

The 19-year-old came through the Sale academy before joining Northampton at the start of last season.

Having his brother James, only two years older, already in the Sharks squad encouraged him to look for a change of scenery so, rather than playing with him, he is now looking forward to facing him.

He added: “Sale was a good club but I just wanted a change and Saints offered me a contract so I thought it’d be a good idea.

“My brother James was at Sale, too, and I didn’t want to get stuck behind him. He’s been doing great this season getting some game time off the bench in the Premiership. We speak regularly and he’s always interested to know how I’m doing.

“We played together before but never against each other so we keep looking for that game. It should be interesting and quite niggly as you’d expect from two brothers who play scrum-half.

“There’s an A-League game later this season between the Wanderers and the Jets so that could be it. I’ll have to have a look at the calendar and might have to ask the coaches to let me play.”