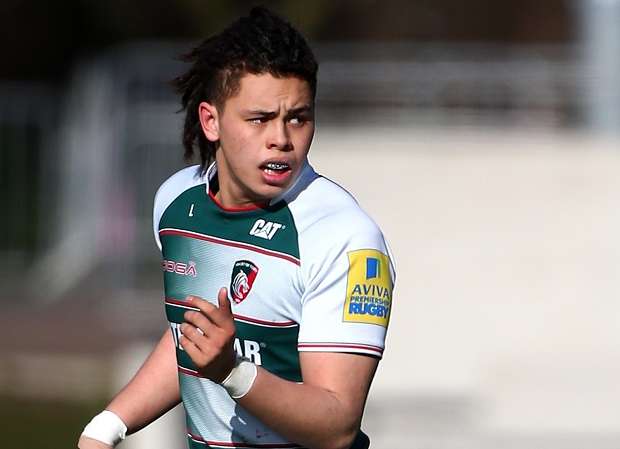 It has already been a busy season for Jacob Umaga but he is not done yet with a tour to South Africa his next target.
The 17-year-old centre, nephew of All Blacks legend Tana Umaga, was a key contributor for Wyggeston College in their first AASE league campaign while also taking part in the Academy league with Leicester.
His performances were noticed by England U18s coach John Fletcher who picked him for the inaugural Five Nations tournament over Easter.
Yet again, Umaga was on song helping England lift the trophy with a stunning away win over Wales in the final game. And he pushed on with an appearance for the U19s against France.
With his exams coming up, focus has turned back towards school but he will be targeting the tour to South Africa in August after that.
“It was good to play in the AASE League because it gave us the opportunity to play every week at a very good level,” Umaga told TRP.
“I also played in the academy league with Leicester and then for England which made for a busy season and the body is definitely feeling it.
“The past few weeks have been a great experience for me. I wasn’t expecting to be involved with the U19s but it was a nice surprise. We could have won that game but they were some big boys in their team and we let them in late and we drew.
“I’m focussing on my school work now with exams coming up and it was hard to keep up while I was in camp.
“After that I hope to tour South Africa. I’ve never been on tour so it would be good to end the season there.”
Umaga’s involvement in the U19s game two weeks ago caught the attention of the New Zealand media who were surprised to see him turn out for England.
But being born in England where his father Mike played for Halifax Rugby League, Rotherham and Coventry, there was only ever one country Umaga junior thought of representing.
He added: “It was the first time people talked about me in New Zealand but it didn’t affect me. I was born in England and came through the system here so, as much as I’m proud of my Kiwi and Samoan heritage, I’m English at the end of the day.
“My dad has helped me out a lot making sure I developed my skills from a young age like left- hand passing and kicking.
“You need a lot more than running through people to cut it in senior rugby and we’ve been reviewing my games a lot in the past six months to make sure I play as well as I can rather than rest on my laurels.
“I usually play fly-half but I’ve moved to centre this season and I quite like it. You get to control the game more at No.10 but you tend to have more space to carry at 12 and I enjoy both.
“I won’t be staying with Leicester next season but I’m not too sure what I’ll be doing. I’ve been at the club for a fair while and I thought it’d be good to explore new things.”