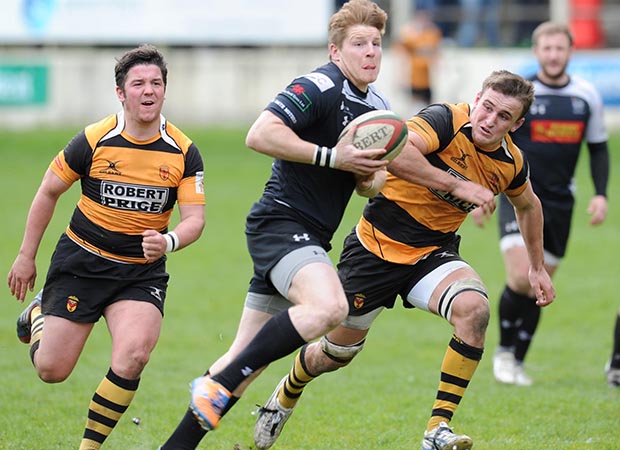 James Cordy-Redden is about to sit his last exams at university but he could be an Olympian by next summer after signing a contract with England Sevens for the upcoming season.

The 21-year-old is currently turning out for Cross Keys in the Welsh Premiership while studying real estate full-time at Bristol’s University of West England.

A few weeks back he was in Hong Kong playing for Samurai’s invitational side at the same time as England were taking part in the World Sevens Series and that’s when head coach Simon Amor spotted the full-back.

He saw enough to offer Cordy-Redden a contract that will give him the opportunity to represent Great Britain at the 2016 Rio Olympics.

“It’s quite a mad thing to think I could be an Olympian next year but it’s a long way off yet,” he told The Rugby Paper.

“I’m nearly done with my degree and I’ve got my exams coming up. I finish on May 19 and on the 25th I’ll be linking up with England.

“I’m looking to get stuck in as quickly as I can, condition myself to the demands of Sevens and hopefully I can get involved in the FIRA tournaments over the summer. Getting capped on the World Series would be an amazing achievement.

“I know it’s going to be a challenge but I can’t wait to get going and fully commit to the programme to give myself the best chance. I’m a back-three player but Simon is looking to use me as a forward.

“I spoke to him when I got back from Hong Kong and he asked me about my rugby ambitions.

“I always loved playing Sevens and it went from there really. Next thing I knew my agent Rhys Davies told me they wanted to offer me a contract.”

The former Cranleigh School head boy started his playing days at Guildford rugby club and went on to represent Surrey U16s and U18s.

But being a late developer, he was never picked up by an academy so he decided to take a gap year and try his luck with Rosslyn Park in National League One.

It proved to be a tough ordeal for an 18-year-old so he enrolled at UWE and, like current England Sevens captain Tom Mitchell, the move to Bristol proved to be a winning one.

He said: “I’ve got a Welsh grandmother so when I moved to Bristol I decided to give a shot at representing Wales Students. I ended up being selected and faced England.

“From that game I asked the management if any Welsh clubs were looking for new players and that’s how I joined Cross Keys who turned out to be a perfect match.

“The last two seasons have been great and I’d never be where I am now if it wasn’t for Keys. I didn’t get much of a look in in the first couple of months but I got my debut against Ealing in the B&I Cup and I haven’t looked back since. I’ve managed to play 51 games for them so far which I’m very proud of.

“It’s good to leave the club pushing for the Premiership title. We’ve got the semi-final against Ebbw Vale next week which promises to be a great occasion between two rival clubs. Hopefully we can go through before potentially taking on Pontypridd in the final.

“It’d be awesome for me to thank Cross Keys for everything they’ve done for me by helping them win the Premiership. They took my career to another level and I’ll always be grateful for that. I’d never turned down a chance to play for them again in the future.”