By Andy Goode
The third Test in Cape Town was the first time we got to see the Danny Cipriani–Owen Farrell axis in action, and while England stopped the rot with a back-to-basics victory I think it’s way too early to determine whether the two can work together effectively for the team.
Both are alpha males, dominant voices in the team, and when you’re playing at 10-12 plenty of chat isn’t a bad thing – if you’re both on the same wavelength. It was interesting to see Faz’s body language as Cips put in that superb kick through for Jonny May. He appeared to turn away, perhaps thinking it was the wrong option but I’m sure he’d have been one of the first to give him the ‘high fives’ once what seemed like a lost cause became the match-winning try.
Faz and Cips have just got to find the right balance as a partnership, and that doesn’t come overnight. It’s going to be a bit trial and error with these two. Danny is more of an instinctive player whereas Faz is a bit more of a systematic ‘this is how we play’ process type of player. It is a partnership that could work but it also needs time to develop. Hopefully that will come at training camps and during the November Internationals, as we build towards the World Cup.
As a fly-half, your 12 acts as another pair of eyes and ears and I was fortunate, early on my Leicester career, to have Pat Howard outside of me at inside centre, and then later on as coach. Riki Flutey was another who I developed a good understanding with in a short period of time, at Brive and then briefly with England.
He was a big talker and a big organiser. As a 10, you only get a split-second to look at the defence and decide what you’re going to do next before a bloody-thirsty openside piles into you. A good 12 will tell you if the defensive alignment has changed or if what you’ve called needs to be slightly different. If he is over-calling or over-riding the 10, he is normally doing it for a reason. Trust is the key word here.
The big thing for Eddie Jones is where does he want to play Farrell? Some people say he should play him in his best position as fly-half, others   say he should be picked at 12 with Cipriani or George Ford inside him at 10. Bar Ben Te’o, who hasn’t done enough yet to warrant being in the conversation, there isn’t really anyone else who has put their hand up to play there.


If Jones is going down the line of playing Farrell at 12, then, for me, on current form Cipriani has to start at 10.
That’s not to say that George Ford can kiss goodbye to the jersey, he deserves respect for what he has achieved with England and could still have a big role to play. When he is attacking the gain line, he is a fantastic player and he still produced some magical moments in the first two Tests even though we were beaten by the Springboks. However, he has been found wanting at times when it comes to getting the big-game moments right.
In the second Test, George was very indecisive in what he did in terms of returning a kick and ended up giving a costly penalty away. He needs to show more authority in those situations. His ability to manage a game when England aren’t on the front foot has also been questioned and he probably needs to be more vocal instead of relying on Farrell in that regard.
Defensively you’re not going to lose anything with Cipriani in over Ford, if anything he is the physically stronger of the two, as we saw when he helped to win a turnover by holding an opponent up in the air at Newlands. For me, defence is probably a mental thing for Danny.
I’ve seen times over last few years where he’s not been that interested in defending at club level but has been ridiculously good with ball in hand. But he has worked hard on that side of his game, and he can do it. He is never going to go around belting people but, when he has got the bit between his teeth, he puts his head in where it hurts and makes his tackles.

The Rugby Paper is on sale all year round! Keep abreast of the June internationals and your club’s activities in the off-season by subscribing: http://bit.ly/TRP-Sub 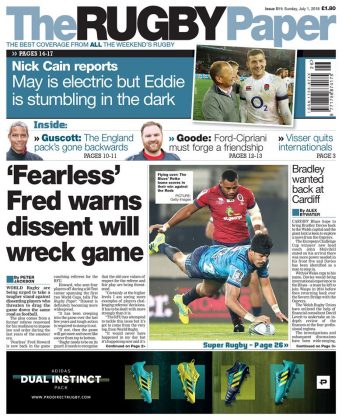