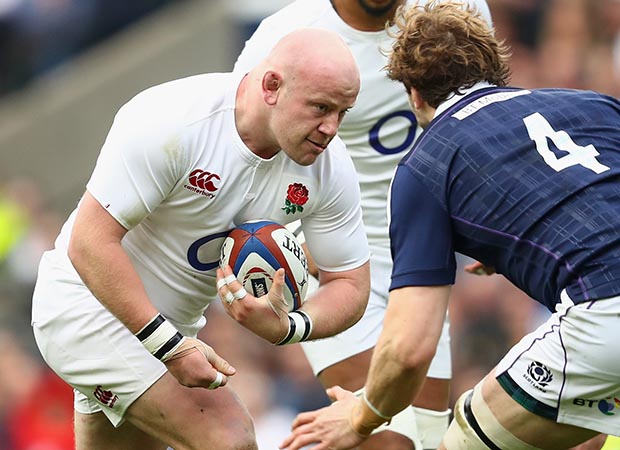 England stalwart Dan Cole reckons the sound of thundering heels from young tight-head pretender Kyle Sinckler will ensure he never drops his guard in the quest for improvement.
Cole has defiantly occupied England’s No.3 jersey since his debut against Wales in 2010, constantly upgrading his skills in an ever-evolving game in which a prop’s ability to carry, pass and defend is as valued as his mastery of the dark scrum arts.
Sinckler’s sheer athleticism means Cole, 29, is having to adapt, but it is a challenge he embraces as he looks to cement his reputation as one of the world’s leading tight-heads – a status that should be reinforced this Wednesday when he is selected for a second tour of Lions duty.
Cole, who has bounced back brilliantly from the crushing disappointment of England’s World Cup failure in 2015, told The Rugby Paper: “I’ve been pleased with my form in the Six Nations and the autumn, but the challenge is to get better.
“Coming through the Leicester ranks means competition is something that drives you. I was up against Julian White and Martin Castrogiovanni so it’s nothing new to me and looking at the way Kyle Sinckler, below, is playing is bringing out the best in me.
“Sincks has grown from just being a powerful ball-carrier to a point now where his whole game and game understanding has grown. The England coaches, and Graham Rowntree at Harlequins, have challenged him to do things much better and, credit to him, he’s done exactly that.
“You saw the impact he made when he came on during the Six Nations and it’s great for England that we have that strength in depth at tighthead. With other guys like Paul Hill coming through it means I have to improve, but, believe me, there’s a lot more to come from Dan Cole.”
This year’s Six Nations was acknowledged as one of the most attack-minded ever, which reflects the changing face of Northern Hemisphere rugby in which this season’s Aviva Premiership matches averaged 5.39 tries.
Explaining how he has adapted his game, Cole said: “Every year you learn more and more new things and there are areas of my game, like ball-carrying and set-piece skills, that I constantly seek to improve. Defence is huge for props and if you can’t improve it you won’t get picked.
“You watch yourself in games two or three years ago and think how slow and crap you were in certain situations, so you never rest. You look at the game now compared to what it was three years ago and teams are going all out to get more try bonuses.
“We don’t play on bogs anymore, the old-fashioned scrum-fests have disappeared and most games now are high scoring. It shows the quality of player in the Premiership now.”
Having tasted Lions success in Australia four years ago, Cole is desperate for a crack at New Zealand. And he is delighted that his old coaching mentor Rowntree will be heading Down Under as well.
Cole said: “Going to New Zealand would be massive for me and a great honour. I’ve played in World Cups and won three Six Nations’ titles and a Grand Slam, but it’s one of those tours that’s the pinnacle of your career and you aspire to be among the best players.
“I’ve been lucky enough to be on one winning tour, so to go through all that again, especially in New Zealand, is something I’d love to experience.”
He added: “I’m pleased for Graham Rowntree. I know how cut up he was after the World Cup so it’s great to see him bounce back because he’s a proven, quality coach.
“We were all disappointed with the World Cup and that’ll always be with you, but I don’t go to bed worrying about World Cups. The main focus is on putting it right, which we’ll get our chance to do in 2019.”
Club matters dominate for now and Cole was saddened by the enforced retirement of his long-serving Leicester loosehead colleague, Marcos Ayerza, due to a back injury.
Cole said: “Marcos is one of the best overseas players the Premiership has seen and as a young tighthead, I learned so much training and playing alongside him in Leicester’s front row.
“You build great friendships and he’ll be missed, but Ellis Genge’s game is coming on incredibly. He was signed on a bit of a flyer from Bristol but his ball-carrying ability, getting capped by England last year and the fact he’s in the wider England squad again now says a lot about him.”
While Genge still has questions to answer over his temperament, Cole believes the Bristolian is ready to step up for England on June’s demanding tour of Argentina.
“Since coming to Leicester he’s grown up as a person and that’s translated into his rugby,” Cole added. “Being exposed to England, Eddie Jones and Leicester coaches like Richard Cockerill, Aaron Mauger and now Matt O’Connor means he’s realising he can be an international player.
“Set-piece is one of his work-ons and Argentina pride themselves there, so you find out a lot about people and I’m sure he’ll improve going there.”
NEALE HARVEY