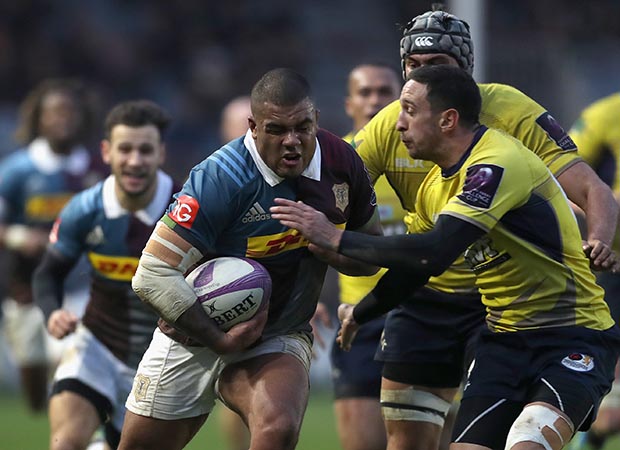 British & Irish Lions legend Adam Jones reckons dynamic Harlequins tighthead Kyle Sinckler can force his way to the front of the queue to fill one of Warren Gatland’s touring spots in New Zealand – if he excels in the Six Nations.
Jones, who mentors Sinckler at Quins, believes the 23-year-old is now rivalling Dan Cole for England’s starting jersey and that his all-action style is perfectly suited to the demands of beating the All Blacks on their own patch this June.
Irish sensation Tadhg Furlong has earned rave reviews, while Scotland pair WP Nel and Zander Fagerson and Welsh duo Tom Francis and Samson Lee are in the frame, but Jones, right, is adamant Sinckler is the man Gatland must turn to.
He told The Rugby Paper: “Furlong’s come through quickly and Coley’s definitely up there, but everybody will need a big Six Nations and I reckon Kyle’s got a great chance as he’ll provide exactly what the Lions need in New Zealand.
“I’ve spent lots of time with him at Quins, and he’ll be in the All Blacks’ faces, he’ll carry hard and he’ll tackle hard. You’re not going there for a scrum-fest so he’s mobile and as fit as he’s ever been, which makes him a very good bet.
“Until recently Scotland’s WP Nel would have been a good shout and you’ve got the two Welsh boys, Francis and Lee, but I’m not sure which of those two is first choice for Wales right now so I’d certainly put a pound on Kyle for the Lions.
“He’s a good footballer and you need that all-round game there. Him coming off the bench in that last 20 minutes is a frightening prospect.”
Jones, meanwhile, has outlined his ambitions to follow former Wales front row colleagues Robin McBryde and Jonathan Humphreys into Test coaching after accepting a role as player- coach at Quins, working with Graham Rowntree.
Jones, capped 100 times by Wales and the Lions, explained: “I came here in a player-mentoring role in 2015 to help Kyle, Will Collier and the other young props and coaching is something I wanted to get into anyway when I eventually retire.
“It’s a great opportunity to take my first steps and working with Graham means that I’ll learn a lot.
“I worked with him on two Lions tours and played against him as well, so that will benefit me and we’ve excellent young props to work with.
“Ultimately, I’d like to work at Test level. Robin McBryde was put into it early on in his career and has done very well with Wales, while ‘Humph’ coached me at the Ospreys before he went to Scotland, so they’re good role models.”
While Jones predicts high honours lie ahead for Sinckler, he is equally convinced that unsung Quins tighthead Will Collier can apply additional pressure to Cole – when he returns from the broken ankle sustained yesterday against Sale.
“I’m struggling to see a better scrummaging tight-head in the Premiership than Will – and that includes any nationality because he’s that good,” Jones said.
“He’s adding to his game and while Coley is still quite young and will be very hard to shift, Kyle and Will are working hard to get that spot off him. They’re knocking on the door and it’s great to have two exceptional English tightheads at Quins.”
Jones, 35, endured personal tragedy last August when his mother passed away suddenly while Quins were on a training camp in America. However, his bond to the club was cemented by the actions of erstwhile bad boy, Joe Marler.
He explained: “That was a tough time but John Kingston was brilliant and, although he’s had a hard time off the Welsh public, Marler was fantastic in looking after me.
“I’ll always be grateful for what he did then and Quins have been amazing.”
NEALE HARVEY