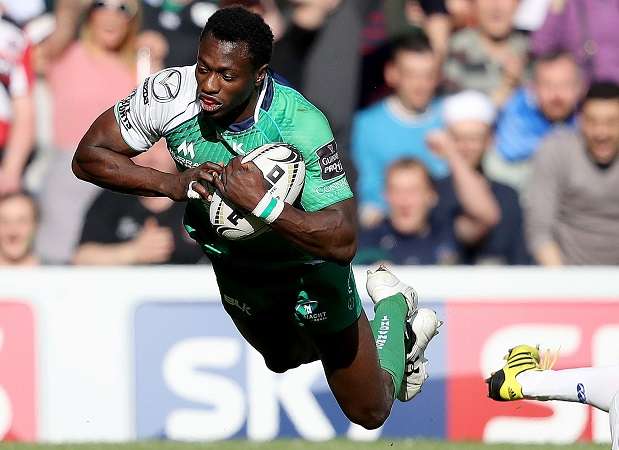 Tony Smeeth was watching the Pro12 Grand Final from his father’s hospital bedside in Dorchester when a familiar figure flashed across the screen in Connacht green.
In a dazzling whirr of speed and skill, Niyi (‘Nee’) Adeolokun shredded Leinster for a try fit to win any trophy – the same Niyi Adeolokun who had been written off as too skinny and whose English mentor had bought the undernourished student lunch the day they met.
“I don’t mind admitting I had tears in my eyes,” Smeeth said. “Seeing ‘Nee’ do that in the biggest game of his life was very satisfying. All the memories came flooding back of that first encounter which must have been all of six years ago.”
Smeeth’s long rugby journey, starting as a player in the Dorset village of Puddletown, had taken him to Exeter and on to Dublin after a decade as an innovative coach in the United States. By the time Adeolokun came knocking on his door in the Irish capital, Smeeth had built a formidable reputation for developing talent as director of rugby at Trinity College.
The Nigerian wing’s story is as implausible as Connacht’s rise from chopping blocks to champions which given the multi-national nature of the Pro12 means champions not just of all-Ireland but all-Wales, all-Scotland and all-Italy to boot.
Galway, the largest of the western province’s five counties whose scattered populations add up to less than half the size of Birmingham, has been to some 40 All-Ireland football and hurling finals and won a fair few. Connacht as a whole had never won anything on the rugby field in more than 130 years until last Saturday night.
They did it, what’s more, without losing their identity but making a virtue of it. More than half the 23 responsible for engulfing Leinster with their handling game are Irish and more than half of those are Connacht born and bred.
Some are converts to the cause. Aly Muldowney, the Anglo-Irish lock, started out in basketball.  The fly-half, AJ MacGinty, played soccer for Shelbourne, amid talk of interest from Chelsea.
The scrum-half, Kieran Marmion went to school and university in south Wales without anyone there detecting a Test player in the making. Nobody will be surprised should he supersede Eoin Reddan as No.2 to Conor Murray during Ireland’s three Tests in South Africa this month.
None of the new champions, though, had a journey to match Adeolokun’s, from Ibadan to Dublin with his family at the age of nine. He began playing various football codes at Synge Street Christian Brothers School whose old boys include the broadcaster Eamonn Andrews, Eddie Jordan of F1 fame and a host of international soccer players including one who perished in the Manchester United air disaster of 1958, Liam Whelan.
Adeolokun began at the Templeogue Synge Street GAA club, took up rugby at school and found a place in an expanded Leinster U19 squad. They decided he wasn’t good enough and that would probably have been that but for Tony Smeeth, alias ‘Mr Rugby’.
“Leinster have so many good schoolboy players coming through every year that they’re spoilt for choice,” he said. “They didn’t pick ‘Nee.’ To be perfectly honest, based on what I first saw, I wouldn’t have picked him, either.
“His school teacher rang me up and said, ‘Leinster don’t want him but this guy is the fastest thing I’ve ever seen in Ireland.’
“And I thought, “all right, okay, yeah, yeah, yeah’.  Then I saw him. He was ridiculously quick. He was also a bit lazy and his skillset wouldn’t have been the best.
“I asked him about himself and found that he was genuinely quite poor. He wasn’t eating properly and at 74kg he was nowhere near strong enough. The first thing I did was buy him lunch and sort out his food.
“Then one day shortly after joining us on a scholarship, he said, ‘I want to be a pro rugby player’.
“The first thing we had to do was get him in condition. By then he’d gone up to 80kg and any laziness had gone. He’s always been a great lad with a lovely smile. I feel as if he’s almost my step-son.
“He’s motivated and he’s smart. In that first year the students went north to play Ballymena and ‘Nee’ was up against Tommy Seymour, now of Scotland. He went round Tommy that day like he was standing still.”
Smeeth compiled a DVD of his protégé three seasons ago. “I sent it out to all my contacts,” he said. “The four Irish provinces got a copy as did Stade Francais, Grenoble, Cardiff Blues and a couple of English clubs.”
Nigel Carolan, head academy coach, made sure Connacht were fastest out of the blocks. “They rang up right away and said they wanted to have a look at him as soon as possible,” Smeeth said. “The rest, as they say, is history. I think he can do for Ireland what Anthony Watson is doing for England.”
Hard-nosed Connacht men like John Muldoon used to rib Adeolokun about being ‘the non-scoring wing’. His response was to score eight in the last ten matches, the last of them against Leinster as stunning a strike as any Jamie Vardy or Riyad Mahrez hit for Leicester.
Peter Jackson