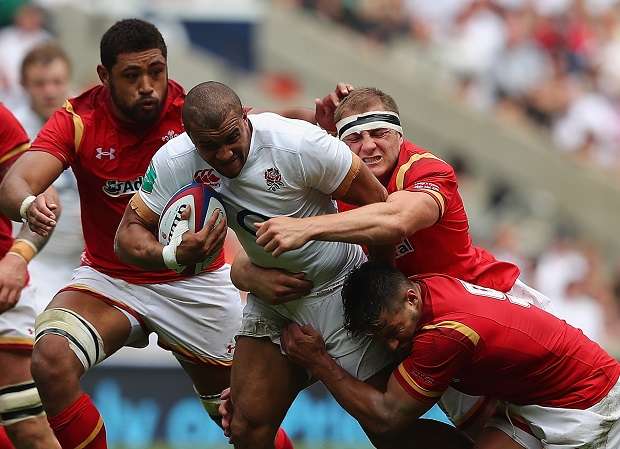 Jonathan Joseph believes England’s cut-and-thrust style is perfectly suited to the fast grounds of Australia as they aim for a first series win Down Under.
England have beaten the Wallabies just three times on their own turf in 17 attempts since first touring in 1963, although their last match in Sydney six years ago produced a 21-20 win to go alongside the dramatic 2003 World Cup final triumph.
Eddie Jones’ Red Rose outfit put last year’s disastrous World Cup behind them with a Six Nations Grand Slam, and centre star Joseph reckons last Sunday’s five-try thrashing of Wales will stand his side in good stead for Saturday’s opener in Brisbane.
Joseph told The Rugby Paper: “We were delighted to get that win. It was a very strong Welsh side but we showed a lot of heart to come back from 10-0 down, and to get such a convincing victory shows the character of the boys in this group. There were a lot of new caps, with quite few young boys getting on the field, and they did exceptionally well, so the way Eddie’s steering us is great.
“He’s put a structure in place but at the same time it’s player-led and we can make decisions on the back of it. I like that style – unstructured, looking for mismatches, taking on defenders – and that plays to a lot of guys’ strengths all over the field.
“The more we can get our wide men like Marland Yarde, Anthony Watson and Mike Brown involved is good for us going forward and I’d hope that style will suit the hard tracks in Australia. We’ve got a lot of work to do for our first Test in Brisbane this week and we’ll need to start better than we did against Wales, but we’ve laid some pretty good foundations and with guys coming back into the side, we feel we’re in a pretty good place.”
Joseph’s sparkling display against Wales, allied to a string of similar livewire showings during the Six Nations, belied what has been a season of Bath struggles which culminated in head coach Mike Ford’s exit.
Instead of going into his shell, however, Joseph has come out firing for England and held off the challenges from Wasps’ Elliot Daly and Exeter’s Henry Slade.
Joseph, who has 22 caps, said: “It was a tough season at Bath, I can’t hide that, but I’ve always found it easy fitting back into the England set-up. They make the environment so good and all the boys have each other’s backs. There’s no cliques or anything like that.
“The Grand Slam was huge and gave us such a boost, but we haven’t played anywhere near our best yet.
“Personally, I’ve relished the competition from guys like Elliot and Sladey. It’s part and parcel of what you do, so you just keep your head down, work on the things and try to be a better player.
“I feel in a good position now. I played well last week and was very happy with my performance.”
George Ford’s poor kicking against Wales last week drew heavy criticism, but Joseph believes his Bath teammate will recover.
He said: “Off the tee he wasn’t great, but he played exceptionally well in attack and created a lot of chances for those around him.
“We all make mistakes. George is an outstanding player. The way he manipulates defenders means it’s a joy to play outside him. He’s a confident guy, someone I really feed off, and he’ll play a massive part on this tour.”
Bullish coach Jones says England are ready to claim a series win, which would go some way towards exorcising the ghosts of last October’s excruciating 33-13 World Cup loss to the world-ranked No.2 Wallabies.
Joseph added: “Australia have more or less got the same team and coaches, so it’s just about what game plan they will bring. But Eddie gives us licence to play what we see which suits our half-backs and us guys outside.
“Eddie’s installed that winning mentality and we’ve got exceptional strength-in-depth throughout the side now, so we certainly believe we can win. It’s our ambition to be No.1 in the world rankings and this is another step along that journey.”
NEALE HARVEY