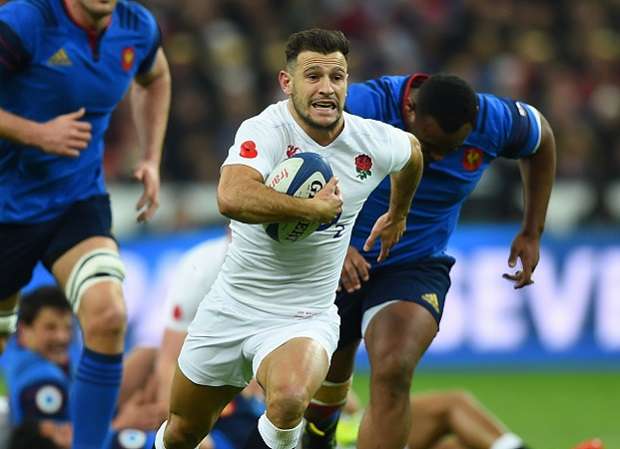 Livewire Danny Care will become England’s most capped scrum-half and the first to win a century of caps, according to Harlequins teammate Nick Evans.
Care, who was dropped by Stuart Lancaster in 2014 and made just one appearance in last year’s World Cup, against Uruguay, enjoyed a renaissance under new boss Eddie Jones, featuring in all five Six Nations matches as England claimed a Grand Slam.
The Yorkshireman now has 58 caps to Ben Youngs’ 57, and is just 19 matches behind Matt Dawson’s Red Rose record of 77. Evans told TRP: “Danny, if he stays fit, could play 100 games for England and he’s totally earned reclaiming the jersey.
“It’s been tough for him after he got dropped and didn’t feature much in the World Cup, but he brings great tempo to a game with his quick taps and speed around the ruck, and since getting a chance under Eddie he’s played very well.
“He’s got good competition from Ben Youngs, Dan Robson and Joe Simpson, but he’s got the shirt back and for the foreseeable future I think he’ll stick around.”
Evans explained further: “Eddie doesn’t want a kicking No.9, he wants a nine who can bring tempo to the game, releases the backs and marshals his forwards well. Something Danny’s really improved on is his communication and organisation.
“His passing’s got better as well and if you look at the way Japan played under Eddie, he’s got a specific way of playing based on pace. He likes half-backs to play flatter to the line with guys running through the line and creating space, sucking defenders in and releasing the backs.
“The Lancaster way was all out the back, trying to go round, but Eddie wants guys to bust through and that’s a big part of Danny’s game. He can go to the line and bring in the big guys like Billy Vunipola, who’s been outstanding as well.”
Evans, meanwhile, has hailed Harlequins’ decision to replace departing rugby director Conor O’Shea from within following the appointment of John Kingston.
Quins opted against wholesale changes by promoting Mark Mapletoft and Nick Easter to the roles of head coach and defence coach, while former England coach Graham Rowntree will be the only new addition to look after the forwards.
Evans said: “If you look at London Irish and Gloucester, they both went for wholesale changes but it hasn’t really worked for them and what’s happened at Irish might have spooked our guys a bit.
“They were out to get high quality coaches and Wayne Smith was among the names bandied around, but when it came down to the interviews and the nitty-gritty, John Kingston excelled and it’s a great appointment.
“While a lot of fans were looking for someone new to come in, what you’ve got with JK is someone who bleeds Harlequins colours. He’s knowledgeable, very intelligent, the boys respect him a lot and he’ll really enjoy the challenge.
“With Mark Mapletoft moving up to head coach and Graham Rowntree coming in, they’re open to new ideas and receptive to how we can develop this club. JK’s excitement is infectious and we want to take things to the next level.”
Evans, 35, had been touted for a coaching role alongside Easter, but prefers to concentrate on playing. He said: “I’ve still got two years left and there are certain positions where you can be a player-coach and some you can’t.
“As part of the leadership group I’ll still be involved in deciding patterns and strategies, but I need to solely concentrate on playing.
“I will be taking over from Nick as head coach of Wimbledon and it’s a path I want to go down, but I don’t want to be a player who goes straight into coaching at a high level, I want to learn my trade lower down first.”
Evans, who faces stiff competition from summer signing Ruaridh Jackson, added: “He’s a fantastic player and to get the best out of myself I need challenging. Ruaridh will want to start and it’ll be great competition.”
NEALE HARVEY