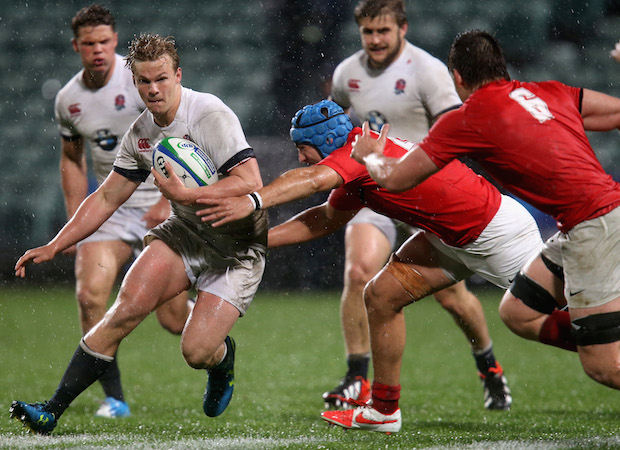 England U20s have recorded their third win of the Junior World Championship beating Argentina to set up a semi-final clash against Ireland.
In difficult weather conditions, Nick Walshe’s side struggled to play the expensive game that helped them blow Italy and Australia away but a late penalty from Sam Olver clinched it for a 17-16 win.
The Northampton fly-half ended the game with 12 points from the tee while George Catchpole scored the only try for England.
The reigning champions will now take on Ireland, who beat Fiji 38-0 to top pool B, on Sunday while top-seeds South Africa will either face New Zealand in the other semi-final.

Walshe said: “The conditions were extremely tough, but it was the same for both teams and we’re just pleased to get the win. We know that we can play better, and we’ll have to up our game for the semi-final. We’re relishing the opportunity to play Ireland, they’ve had a good competition so far and it’ll be a good game.”

Captain Callum Braley added: “It’s never easy playing in wind and rain like that, but the lads fronted up and did well to get over the line. We’re looking forward to the semi-final now. We’re three games into a five game competition and have two massive matches coming up.”

Olver for England and Patricio Fernandez for Argentina traded penalties early to see the score levelled at 6-6 after 23 minutes.
Argentian’s poor discipline was sanctioned with a yellow card to Tomas Granella but, while Olver edged England in front from the resulting penalty, they could not make their one-man advantage count and took that 9-6 lead into the break.
Straight from the restart, England conceded a penalty and Fernandez levelled the score once again with his third penalty of the game.
With the rain poring down by then, England finally broke the deadlock with Leicester winger Catchpole going over in the corner despite a suspicious last pass from Aaron Morris.
Trailing 14-9, Argentina were thrown a lifeline when England’s replacement tighthead Harry Rudkin was sent to the bin for collapsing the scrum.
It looked like they managed to keep Argentina out but just before Rudkin returned, Los Pumitas found an overlap on the left side and Emiliano Boffelli went over.
Fernandez slotted the conversion from wide out and Argentina were in front for the first time of the game.
It was not to be however as England went back on the attack and, with less than a minute to go, Olver slotted the winning penalty to send England to the last four unbeaten.