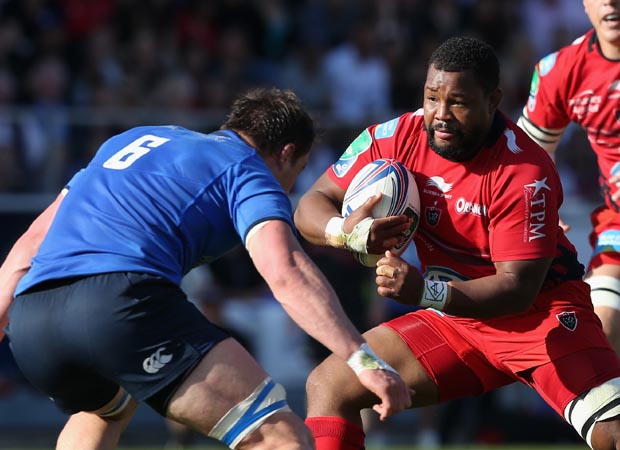 Stuart Lancaster believes the fact that 70 percent of Premiership players are now qualified to represent England justifies the rule that prevents overseas based stars such as Toulon’s Steffon Armitage from donning a red rose jersey.
The Rugby Paper can reveal that 11 of the 12 top-flight clubs hit targets for fielding an average of 15 England-qualified players in their matchday 23s this season, qualifying them for share of the pay-out under the eight-year EQP scheme agreed in 2008.
Premiership Rugby clubs will cash in to the tune of £3m between them after continuing to show football the way on home-grown player development, with a record number of top-flight players now eligible to turn out for their country.
Whilst the Football Association battles the Premier League over upping its quota of English players from a paltry 29 per cent, England coach Lancaster believes the deal between the RFU and Premiership Rugby helps to prevent player drain.
He told TRP: “We want our players playing in England and if we pick Steffon or Toby Flood while they’re in France, what will happen if the likes of Manu Tuilagi, Courtney Lawes, Alex Corbisiero and Owen Farrell choose to go?
“That would have a serious knock-on effect because you want guys to be playing in your own club programme, which helps develop them and gives them an opportunity to go head-to-head against each other on a regular basis.
“I hear calls to include Steffon and I’ve told him the door is not closed, but it’s a rule that’s supported by the clubs and country and any player choosing to go and play his rugby abroad is fully aware of the consequences.
“The special circumstances have got to be associated with injuries. There is that potential there, but it would be more likely closer to a World Cup if that was the case. I wouldn’t do it at the moment, for a New Zealand tour, autumn international or for Six Nations either. Not when I’ve got other players who could be developed.”
“Our EQP figures are very healthy at the moment and we’d like it to stay that way. The RFU pays an unbelievable amount of money to maintain that club/country relationship and the benefits in terms of England player development are clear.”
Harlequins led the way with 20.6 England players per matchday squad, while Bath, Exeter, Gloucester, London Irish, Sale and Wasps all showed healthy increases.
Only relegated Worcester, who are in the throes of rebuilding their academy structure, failed to attain the requisite figure.
NEALE HARVEY