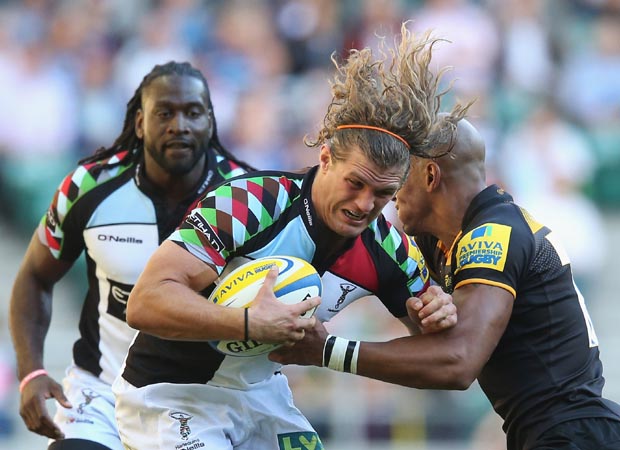 One of the biggest gaps Stuart Lancaster has to plug for the first Test in New Zealand is at blindside flanker but former England captain Lewis Moody believes Luke Wallace is the man for the task.
While the England head coach will be relieved to have his Quins backbone available, a Saints-Saracens final does rob him of one of his chief lieutenants in Tom Wood for the Auckland Test.
Wood has been inspirational in guiding Saints to the Premiership final and during the Six Nations was at his best.
The balance of the back- row was also key to England’s progress – Wood, Chris Robshaw and Billy Vunipola, then latterly Ben Morgan, combining to impressive effect.
Wallace has long been on England’s radar, however, excelling at blindside alongside Robshaw at Quins and ably deputising at openside when his skipper is away on international duty.
With Matt Kvesic struggling for form, Wallace would appear to be Robshaw’s closest rival on the openside but Moody – no stranger to swapping between the No.6 and No.7 jersey – feels it is time the 23-year-old won his first cap alongside his Quins pal.
“I was surprised he wasn’t drafted into the EPS squad when Kvesic and guys weren’t performing quite as well because I think he’s been steady across the board,” Moody toild TRP.
“I played a lot of club rugby at No.6 and my international rugby as No.7 when Neil Back retired so there is no reason he can’t do a job in either.
“It would certainly be a big ask in his first Test but there’s not a massive difference between No.6 and No.7 – at No.6 you tend to do a lot more ball carrying and at No.7 you tend to be in the rucks, winning ball back and tackling.
“Luke deals with both perfectly well. He’s a quality player, abrasive and with great ball skills.”
Wallace made his Saxons debut in January but was this week included in England’s training squad ahead of the Barbarians match and the New Zealand summer tour.
He almost certainly will not be joined by Steffon Armitage but Moody would love to see Lancaster ignore the red tape blocking the Toulon man’s inclusion.
“I know the stance on picking players who play abroad but Steffon over the last couple of seasons has been outstanding,” he said. “In the last couple of months, he’s been man of the match in most of the games I’ve seen.
“But I’ve been a little disappointed with Kvesic this year because he has been so good the last few seasons and he is such a promising talent.
“Maybe he’s suffered a little bit with the move from Worcester to Gloucester.”
Another not touring New Zealand is Tom Croft, even though he did return for the Tigers at the end of the season from a lengthy knee injury.
One of Lancaster’s favourite expressions is “players with a point of difference” and Croft’s speed and athleticism give him that.
But Lancaster will not have forgotten Croft’s last England appearance – the Cardiff mauling last March – where a back-row that also included Robshaw and Wood at No.8 looked horribly unbalanced.
Moody, however, is convinced there remains a place in the England set-up for Croft, but concedes Lancaster was right to leave him at home this summer.
“I think there is absolutely a place for Tom in the England side,” he added. “He’s just come back from two seasons of rugby where he has played very little and had two horrific injuries so to come back from that alone and to be able to play is a huge achievement.
“Allow him to play a handful of games, go away and have a good pre-season and get really fit and strong and then allow him to have the whole of next year to really compete for his place back.
“Having Tom Wood and Tom Croft battling out for that No.6 jersey would have been brilliant and there’s no doubt about Croft’s qualities having been on two Lions tours.
“He’s a very different player to Wood, they are similar in their shape and size, but he’s more athletic and quicker and a better eye for a gap, more of a game changer.
“When Wood is playing he gets through an incredible amount of work, makes a lot of tackles, but he won’t be that game breaker that Croft will be so there are two really different styles there.
“They’re both really good in the lineout, defensively and in attack, and it’ll be a difficult conundrum for Stuart next season.”
RYAN WALTERS