Richie Gray is the not-so-secret weapon South Africa have just re-employed  to help them overcome Wales this summer on the way to a powerful showing in next year’s Rugby World Cup.
The Boks have taken on Gray as their breakdown and defence coach in yet a further testimony to the groundbreaking work the Scotsman has been doing throughout the arena of rugby skills training.
It was Gray who invented and developed the now famous Collision King, the breakdown aid adopted by clubs and countries throughout the world.  Former Lions coach Jim Telfer called the Collision King “one of the biggest breakthroughs in rugby training equipment in years”.
Now Gray, through his company Global Sports Innovation (GSI), has developed five more remarkable pieces of equipment to aid players to maximise their potential at the breakdown.
Like the Collision King, they are all marketed worldwide by Rhino who believe that within five years the resourceful Gray will have invented 75 per cent of the technical training equipment used by the major nations and clubs.
His latest products are all designed to maximise impact and flexibility at the breakdown.


Gray, below, says: “When we talk about the breakdown we automatically think of the jackelling No.7s. My belief is that every player needs to know how to control the breakdown. Look at the wonderful work done by Brian O’Driscoll with Ireland and Conrad Smith with the All Blacks and of course they are world class centres.
“If we are moving into the era where everyone wants to play all-round rugby, then attack and defence, particularly the breakdown, encompasses all.
“There are 150 breakdowns per game. It’s a non-stop struggle and clearly crucial to the result. At the top level you are dealing with players who are so physically developed that coaching “live” breakdown manoeuvres can be risky.
Gray’s new tackle/break-down technical training aids are: The Low Tackle bag, The Arms of Steel bag, The Grip and Rip bag, The Ruck Warrior, The Collision Disk.
The Low bag is smaller and heavier than contemporary tackle bags and is particularly effective for the bulkier pro player.
Arms of Steel contains a steel tube filled with sand. A tackle sends off a chain reaction inside the tube forcing the player to use sufficient arm strength to prevent losing control of the bag.
The Grip and Rip bag demands the correct body height and technique to get over and fight for a strong grip point, reinacting the stealing technique. 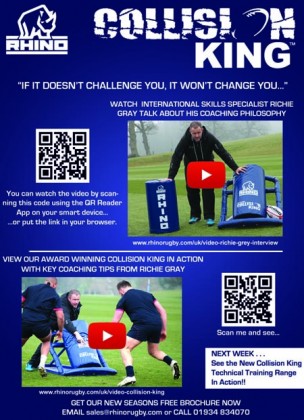 The Ruck Warrior weighs 75kg and stands on two solid plastic pillars. The coach can hold two straps on top to change the angle of attack. It is sufficiently solid, with the coach’s weight added, to hold the strongest forward.
It teaches power, dynamic body shape and a number of clearance techniques. The final piece of equipment in the range is The Collision Disk, which isolates hip-sink, leg-drive and gate entry.
All these tackle/ breakdown aids are designed to make the players work hard and quickly induce fatigue before moving to a “live” session. They also reduce the bone-on-bone element of training, so minimising injury while teaching the essential over-the-top and clearance technique of the  breakdown.
Gray says: “The training aid must challenge the athlete physically and mentally at all times and be accurate in execution. This can be achieved through the specific weight, design and function of the training aid.”
Gray who was a flanker with Gala before moving to the second row in his later career, adds: “Everyone’s looking for an edge and these training aids give you that.”
Gray spent 12 years with the Scottish RFU before Jim Telfer arranged for him to expand his knowledge by coaching in South Africa with the Stormers. Gray later returned to the Blue Bulls where he met current Springbok head coach Heyneke Meyer.
He flies out this weekend to join up with Meyer and his Boks before the June visit of Wales.
“There’s a myth that South African players can’t bend,” he says, “although it’s true their breakdown work was a weakness a year ago. It’s improving although it’s not the finished article yet.
“I’m looking forward to this first challenge against Wales. They have some outstanding breakdown players so it will be a good test.”
DAVID JOHN