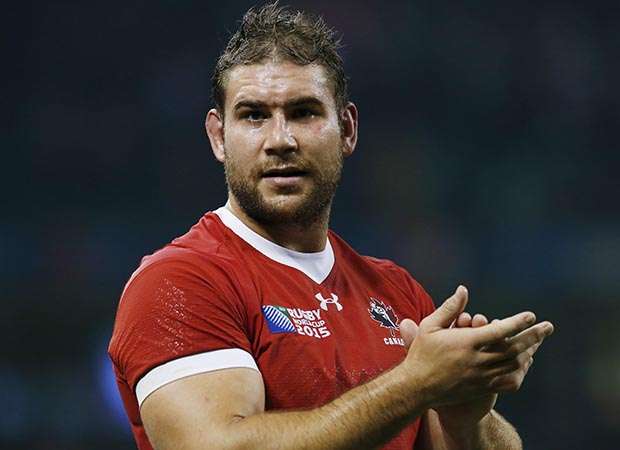 1. Tom Court – Great Irish international who doesn’t grab the headlines but does a lot of unseen work. At top of his fitness levels as well, playing a lot of minutes for London Irish.
2. David Paice – Throws accurate darts at the lineout. But he is also so dangerous around the park and has good offload skills.
3. Martin Castrogiovanni – This guy is always so passionate on the field especially in the Italian jersey. We’ve had a few spats at international level for a few years now!
4. George Skivington – He’s the Exiles’ club captain but he’s also this team’s skipper. Always gives 110 per cent and has an incredible will to win.
5. Samu Manoa – He is a devastating ball-carrier and tackler. It’s always tough to play against him whether it is in the North America derby against the USA or when he was at Northampton.
6. Tyler Ardron – The Canada captain is great with ball in hand and can also be a lineout option. Very versatile, too, as he can play anywhere in the back row or second row.
7. Julian Salvi – The Chief is so tough over the ball. I don’t really know how he does it but he always seems to be in the middle of things at the breakdown.
8. Luke Narraway – He has skills to burn and, to be honest, he would probably be my kicker. Also the best after-match player on this team.
9. Darren Allinson – A naturally-gifted footballer who puts the opposition on the back foot whether it is with his kicking game or speed around the rucks!
10. Nate Hiryama – Spicy Nate, as we like to call him in the Canucks squad. The Sevens star and Canada playmaker is untouchable when he’s on form.
11. DTH van der Merwe – He was Canada’s superstar at the last World Cup. He can get over the line from anywhere and he plays with an aggressive edge that’s hard to find.
12. Manu Tuilagi – A powerhouse who can beat you in so many ways. He can go inside, outside or, more painfully, through you.
13. Jonny Joseph – I first got to know him when he broke through the London Irish set-up a few years back. Despite his age he has great vision and makes a lot happen around him.
14. Alex Lewington – This kid has feet like a fiddler’s elbow. He has pace to burn and scores tries for fun. Can’t be long before he has a shot at international rugby.
15. Andrew Fenby – “The Baron” as we call him at Irish. He breaks tackles for fun and his hat-trick against Edinburgh last weekend only proves how good a finisher he is.