Probyn column: Aggressive scrums are a recipe for more injuries 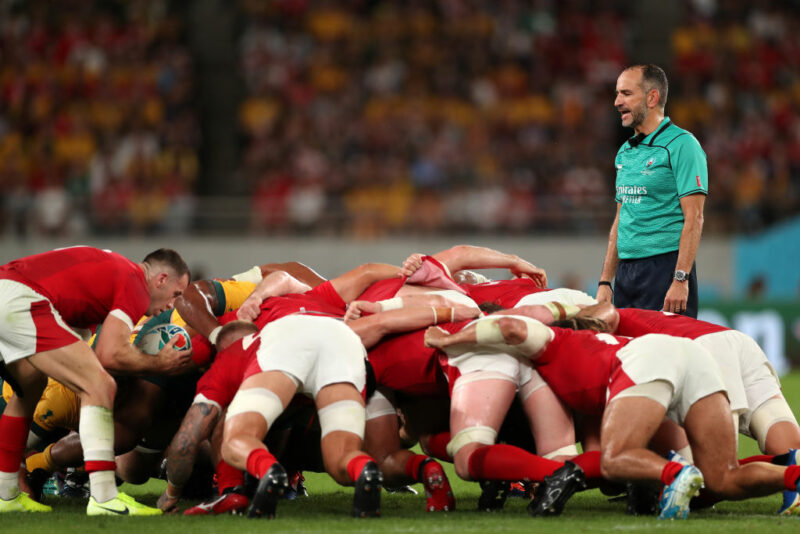 At last it’s started and we can finally get involved in the games, not those on the pitch but the speculation and friendly xenophobia that a World Cup in any sport brings.

Last week’s first round of matches produced no surprises with all the major nations comfortably beating their less fortuitous opponents.

Just one game was a close call, with France beating Argentina by just two points as the drop-goal came back from the cold to save France from what looked like being a successful fight-back by Argentina, who had slowly begun to win the forward battle.

I found all the games quite exciting particularly with the sound switched off, as then I could put my own interpretation on what I was watching.

The good things first: I thought the TMO system worked quite well as it was used efficiently and (most importantly) quickly to identify if there was a problem or not.

Play was generally a bit more open than I expected as teams used a number of new ideas, some legal some not, in trying to beat the rush defence.

Referees are letting games flow and keeping a check at breakdowns and tackles, although missing a few obvious infringements.

Earlier in the week World Rugby admitted that all is not well with how they think the Cup is being refereed at the moment, choosing to publicly condemn the standard in the first round of games.

I disagree. Yes, the refs missed a couple of incidents but generally they are doing a good job particularly when you consider the massive difference in standards between teams.

In truth, it is World Rugby that should face criticism for allowing the slow erosion of the refereeing authority which was once the sole arbiter of the game.

What they seem to have forgotten is players have always understood that because of the complicated nature of the laws of the game, they have to play to the referee’s interpretation and should be able to adapt their game accordingly.

World Rugby, in seeking to increase spectators by making the ball visible at all times, have encouraged the slowed down delivery of the ball at breakdowns which reduces the opportunity for counter-attack against broken field defence.

The one area I agree has been refereed badly is at the scrum, where referees still don’t seem to be able to understand or enforce laws and World Rugby sit on their collective hands. Even though the referee is now supposedly in charge of the scrums formation, they all allow a charge when they call “set”, resulting in a pushing competition before it is technically allowed.

The scrum formation should not be an aggressive act and never was until South Africa’s return to the  world stage back in 1990/91. During their isolation they had developed charging at the engagement which led to several injuries at youth level when they returned to the international game.

This led to a number of variations at youth level and referees taking charge at the engagement with what has become a series of different attempts at reducing the impact as the scrum is formed.

The current incarnation is with a slow series of calls which creates a tension in each pack akin to a spring waiting to be released, which results in both packs firing into each other as the referee calls “set”.

The law states that once the scrum is set all players must be in position and ready to push forward.

Basically what that means is, no pushing until the ball comes in – and yet referees continue to allow this aggressive engagement.

By allowing an aggressive set, the referees who are under the influence of World Rugby, are creating the potential for injury as both front rows try to seek an advantage in a limited space.

Another area that creates a potential for increased injuries is the ability of the scrum-half to leave a ball at the base of a breakdown while putting his foot on the ball. Once the scrum-half touches the ball, it has technically left the breakdown and should be free for the opposition to challenge for it.

The long delay in playing the ball allows the opposition to reform their defensive line and results in short pop passes to a slowly-assembled phalanx of forwards, creating the increased risk of tackle related injuries.

It also increases the risk of injury for catchers of box kicks, with players lining up to hit them once they touch the ground after the inevitable unnecessary leap in the air to catch the ball.

World Rugby is failing to address these issues that they created, while expecting match officials to solve the problems, and then condemn them if they don’t.

One thing’s for sure, World Rugby’s public condemnation of their top match officials is certainly not consistent with the standards of respect that always was, and still is, expected by the game.