Posted on 18th September 2020 by admin in Features, Nick Cain 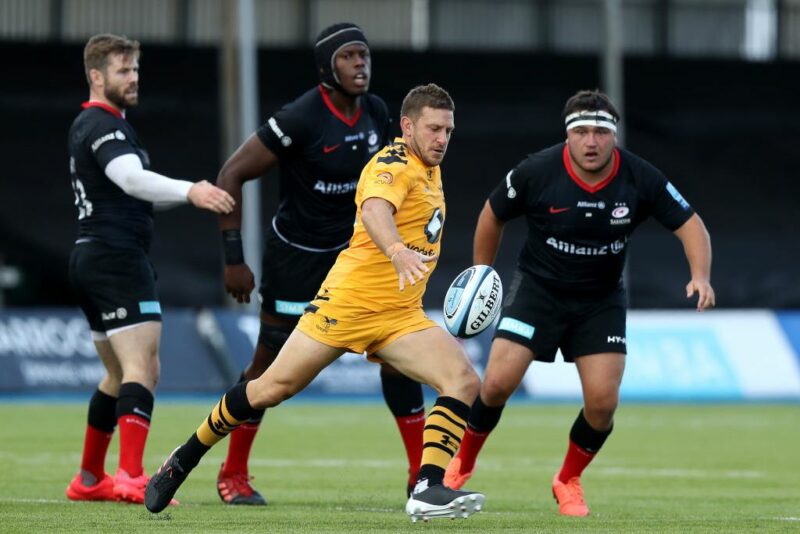 JIMMY Gopperth is in his element, at the heart of a Wasps side that is swarming with young English talent, and is making a swashbuckling bid for the Premiership play-offs.

Ask the 37-year-old Kiwi what he is doing at the epicentre of a squad in which some of the supercharged kids are half his age – like 19-year-old Alfie Barbeary, the Wasps midweek hat-trick hero against Leicester – and there’s no hesitation.

Gopperth, who won the Premiership Player of the Year award in 2017, as well as the equivalent RPA and Wasps awards, says that he is still in love with the day job, and that his mission is to keep going and give something back to the club he joined five years ago.

He is making a pretty good fist of it, with the veteran fly-half playing like Captain Fantastic in leading Wasps to a landmark victory over Saracens at Allianz Park a fortnight ago, inflicting their first home defeat since October.

It was Gopperth’s 100th appearance for the club, and to mark it he was made skipper of a largely second string side, which faced a Saracens outfit fielding a potential European Cup quarter-final line-up.

Gopperth rose to the occasion magnificently, steering Wasps to an against-the-odds 28-18 win in which he kicked 23 of the points – including a long-range strike to punish the brutal head-high tackle on 18-year-old Charlie Atkinson which saw Owen Farrell sent off.

He then pegged Saracens back in their own half, before finishing the job by converting the clinching try by Tom Willis.

On the final whistle Gopperth held both arms aloft, and after being mobbed by his jubilant teammates, he saluted the “passion and pride” of the underdogs.

However, there was no time to dwell on it, or on the concussion suffered by Atkinson, because the following Wednesday the veteran was back in the fray.

Gopperth played most of the last quarter as Wasps ran riot in a nine-try 54-7 rout of Leicester at the Ricoh, the worst Premiership defeat the Tigers have suffered.

It was Wasps’ eighth win in their last nine matches, including three potentially season-defining victories by their second string in the last three weeks against Worcester, Bath and Saracens.

Gopperth says it has been a blast, and one that has given him great satisfaction, but that Wasps still have a hard road to travel.

“To play 100 games for any team is pretty special, and now I’m lucky enough to have been able to do that twice since coming to the UK, with Wasps and before that Newcastle.

“It gave me a great sense of pride to lead the boys against Saracens, and what a group – a mixture of youth and a few older boys. It’s one of those games you won’t forget for a very long time, especially as they picked a strong team which included six British Lions.”

Gopperth’s comment on the five- week sanction for Farrell’s high hit on Atkinson also goes to the crux of it: “Let’s see if we get another tackle like that whether it gets five weeks – because I’ve seen some very long bans for tackles like that. The only thing we ask for as players is that the rules and the sanctions are consistent.”

Gopperth is a relaxed have-boots-will-travel Kiwi, with surfing an ever-present in his life after being raised on the Taranaki coast.

“I’m from a dairy farm and where I grew up is very rural, a place south of New Plymouth on the coast called Opunake, which has a lovely little rugby community.

“I’ve been surfing since I was a little kid, so it’s just typical that I’ve come to Coventry, which is about the furthest point from the ocean anywhere in England! I go down to Portugal most summers, and although there are not many surfers among the other boys at Wasps, I know Matteo Minozzi has been down to Cornwall to give it a go.”

Gopperth’s pre-Wasps career saw him learn his trade with the Hurricanes before a short stint with the Blues. After leaving New Zealand for Newcastle in 2009 he had earned two Junior All Blacks outings and, after five seasons at Kingston Park, he crossed the Irish Sea to spend a couple of seasons with Leinster (2013-15).

That inside track makes him doubtful that Saracens will beat Leinster in Saturday’s European Cup quarter-final clash in Dublin without Farrell.

“Leinster are the complete package at the moment – they could go the whole season unbeaten, which would be an unbelievable achievement. They probably have too much strength-in-depth, especially with the amount of players Saracens have out on loan. But it’s a one-off game, and with Saracens’ record you can’t write them off.”

Gopperth says that anyone writing off Wasps chances of making the last four could also catch a cold.

“Obviously it’s a testament to our squad that whoever puts the jersey on is fronting up, and it’s so good to see so many guys get the chance to show what they can do. It’s not been first team and second team so much as a collective effort to give ourselves the best chance of making the play-offs.”

Gopperth reveals also how Lee Blackett has helped to flick the switch since succeeding Dai Young as head coach before lockdown.

“He’s a brilliant up-and-coming coach. He is so positive, and because he’s not long out of the game he knows what players are feeling, and he’s not scared to give guys an opportunity, which creates competition for places.

“We haven’t really changed our structure since Dai left, but Lee is all about giving us freedom to play. It’s about understanding that you have structure, but also that it’s about keeping your eyes up and playing the opportunities. It is up to us to make decisions, and see the spaces to attack. It is about becoming a Decision-Making Team.”

Gopperth says that Wasps have been helped by the speed with which they have adapted to the breakdown changes. “Now we are seeing a hell of a lot of defensive turnovers – which is good for the game, and good for us because we’ve got flankers like Jack Willis and Thomas Young.

“When you’ve got mutant specialist turnover dudes like ours it definitely opens it up – and all we want is to play quick, off the front foot, and express ourselves with good running lines and good offloads. That’s what rugby is about. It’s pretty exciting to play.”

What is remarkable about Gopperth since the restart is that despite being sidelined by a knee-ligament injury for eight months last year, and then sustaining a broken thumb on his comeback, he still has a bounce in his step.

So, how does he see things panning out now he is into the sunlit uplands of his career – is he looking to outdo the other Kiwi golden oldie, Brad Thorn, and play past the age of 40?

“The body feels really good, and age is just a thing I don’t worry about. I don’t see myself slowing down, and I’m just enjoying what I’m doing – and you just keep on going when it’s like that. It’s a bit of a running joke within the squad that I’ll be playing until I’m 40, but if teams still value you, and give you a contract, then why not?”

Gopperth says that he is already dabbling in coaching. “I do this online kicking coaching one-on-one and I’ve been coaching at Nuneaton Old Edwardians for the last three years, which has allowed me to get my level 3 qualification.”

Coaching is an area he will look at when he retires: “I enjoy giving something back. To play rugby as my job, and go to work doing something you love, there’s nothing better. I’ve acquired a lot of information about the game from different coaches, and you’ve got to give back. ”

However, Gopperth says he is living in the now, and wants to be present to see what this Wasps group can achieve, especially after the disappointment of the extra-time Premiership title loss to Exeter in 2017. “They are a special bunch, but the Premiership is so hard, so tight a competition, that we are just developing, growing, and maturing. This is the first contract season in a while where we haven’t had 14 or 15 changes. There have been only four, and a lot of the guys coming through are from the academy, which has been great to see.

“The boys are buzzing, which is really good with Bristol next up. I played under Pat Lam for the Blues in 2009, and he’s got Bristol in good shape. They have a very exciting squad, and guys like Semi Radradra, Charles Piutau and Calum Sheedy are playing some great rugby.”

So, are Wasps good enough to go up more gears and actually win the Premiership? “It’s a long way to go, and it’s about giving ourselves the opportunity. This team at the moment is able to do what it wants to, and we are growing in confidence. We have to ride that wave as far as we can.”

There may not be any surf in ‘Cov’, but Jimmy Gopperth will do everything he can to help Wasps ride the wave all the way to the winners’ podium.