Posted on 27th August 2020 by admin in Features, My Life in Rugby 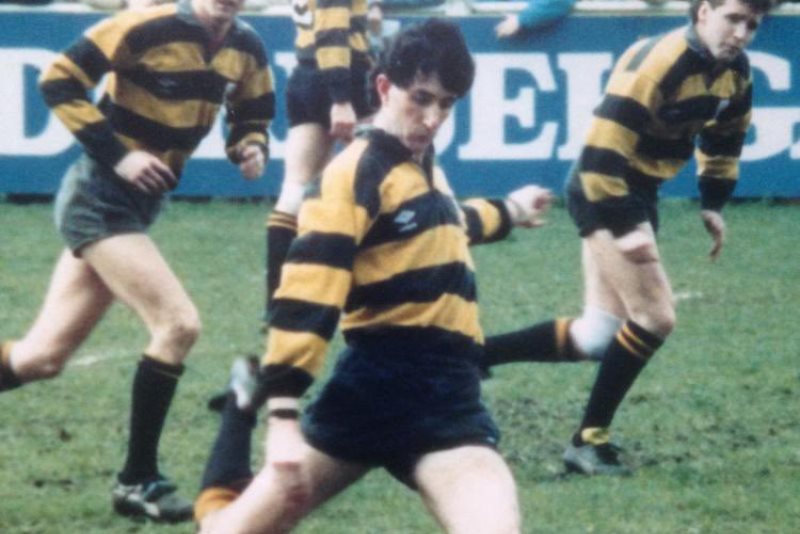 FROM the thrill of appearing at Wembley for my hometown club Wigan as a ten-year-old schoolboy Rugby League player to the shock of only making Orrell Colts’ ‘B’ team and then the high of playing for England ‘B’ only a few years later, my rugby career was like life in general: a rollercoaster.

What rugby taught me was that if you have dreams you should never give up on them because you never know what might be around the corner.

Growing up in Wigan I had a background in Rugby League. Leigh were the first to approach me and I had offers from Salford and Warrington before Dougie Laughton tried to sign me for Widnes. That was one of the most flattering things to happen to me in rugby – he knew a proper player when he saw one.

Dougie came to my house the day after we’d beaten Leicester on the Saturday – the only game they lost all season if I recall rightly – while on the same day, Wigan had beaten Widnes in the Challenge Cup. Widnes were all over them and would have won had they kicked their goals. Dougie saw me as an answer to their goal-kicking problems. He said to me: ‘I think you can make it but don’t just sign for money.’

I turned them down and after that he signed Alan Tait and Jonathan Davies. I always joke that had he been successful in signing me, he’d have got both a full-back and a kicker for the price of one. To be fair, he didn’t do badly with those two.

Growing up, I had a great teacher at St. Cuthbert’s junior school called Mr Toman who introduced me to rugby. He saw something in me in the playground when I was eight or nine and his U11 side was so ‘professional’ in its approach. We’d train every night after school and then have another run through at lunchtime on the day of a game.

Aged 14, I joined Orrell and it changed my life even if the initial years weren’t always straightforward. When I became old enough to play Colts rugby, I was still very slight. Wigan is known for its pies, but I just couldn’t put any weight on no matter what I ate and still can’t.

Being put in the Colts B side for the first year was fair enough as I thought the coaches were safeguarding me, but I was devastated when I was left out of the A side the following year. I very nearly gave up, but these things are character building and I have the Colts B coach, Ken Derbyshire, to thank for persuading me to stick at it.

Rugby has been consistent through the narrative of my life. I met my wife, Karen, through rugby and so many other key events have revolved around rugby and the friends I’ve made in the game.

My Orrell 1st XV debut came against Northern, within weeks of moving up from the Colts. John Carleton was on the wing, the week after he’d helped England beat the All Blacks in front of a full house at Twickenham.

He was very supportive throughout my career and a few weeks back I found a letter he sent to me congratulating me on my move to Leicester in 1991/92.

Either side of that season at Tigers, I had some wonderful memories playing at Orrell under two greats of the game now sadly departed – Des Seabrook and Mike Slemen.

Des would always prepare you very well for what the opposition would do. Although the perception was that Des was this gruff forward-dominated coach, the work of the forwards was a platform for the backs to let loose. We had some class backs, and we’d annihilate teams when we got things right. Mike regenerated the side following a number of key retirements and with the exciting young backs that we had in the likes of Jim Naylor and Austin Healey, it enabled us to compete even when other teams had parity with us up front.

My best period coincided with Peter Williams turning pro and moving to Salford in the late 80s. That allowed me to switch from inside centre to my preferred position at stand-off. With Lancashire, I won the County Championship, I played for the North against USA and then, in 1989, I went on the three-match England B tour to Spain, playing in the Test in Madrid, back at 12 as Gloucester’s Mike Hamlin played 10.

I was flying and looking forward to progressing further in my career only for a back injury, which required surgery, to stop me in my tracks. That season (1989/90) was pretty much a write-off. I then had a season in Australia, with Waratahs in Wollongong, in the summer of ’90, before returning to Orrell for two more seasons. I was working in the nuclear industry up in Sellafield in those days but wanted to be closer to home, so I applied for a job with Heinz. I’m not sure if the two match-winning kicks I got in the wins against Harlequins helped my application, but I remember thinking at the time it can’t have done me any harm that they were sponsoring the matches.

In the 1990/91 season we were going for the League/Cup double and confidence was high after we’d beaten Northampton 60-0 just before Christmas. That was probably our best-ever performance, although the Cup win down at Wasps in the quarter-final was magnificent too. We drew Saints in the semi-final, but they won 18-10 on this occasion to go through to the final. Wayne Shelford returned for the second match and made a big difference to them. The following week, we were beating Wasps as the league season drew to a close, but Chris Oti scored in injury-time.

Orrell was such an inclusive club. It didn’t matter who you were or what you had done, it was what you were doing at any moment in time that counted. It didn’t matter if you played in the fifths or the firsts, there were no egos, no-one claiming a taxi before anyone else after we left the clubhouse at Edge Hall Road on a Saturday night to pile down to Wigan.

Visiting teams loved Orrell because they weren’t used to so many teams socialising together. On one occasion, Bristol painted the town red in every sense. Unbeknown to them, the owner of the legendary nightclub Pemps, a lady called Barbara, had decided to decorate the toilets. Their brand-new blazers were covered in matt emulsion by the end of the night.

I left for Leicester because I’d been moved back to centre and I still wanted to play stand-off. I didn’t want to fall out with anyone as I’d had such great times with Orrell and my dad was still involved there, so I thought it was just easier to move on. I’m glad I did because Leicester is a fantastic club to play for. I got on really well with all the guys, especially Martin Johnson. We had the same sense of humour and I found out he had strong family connections with Wigan – his dad was born in Wigan and used to take a young Johnno up to Edge Hall Road to see Orrell play.

I left at the end of that season to move back to Orrell because, despite only agreeing to once per week training, expectations changed and I couldn’t commit to twice-weekly training de to work. The last season of amateur rugby turned out to be my last at Orrell. It was getting too much trying to juggle the demands of work, life and rugby especially with our first child, Eve, on the way. We annihilated Gloucester by 40-odd points the day after Eve was born but a week of no sleep took its toll the following weekend when Wasps scored three tries in the last ten minutes to beat us. It was literally like someone had taken the batteries out of me; I had no energy.

Sleep deprivation was a constant in those early years of parenthood so the commute over to Leeds, my last club, was a blessing. There was a gang of four of us – Sateki Tuipulotu, who played for Tonga at the World Cup, Richard Mathias and Ian Wynn – and I’d always be dead to the world on the back seat until we arrived for training at Roundhay. Phil Davies was a great bloke to play for and that first season, in the old Division 4, went really well for me, as I scored over 300 points.

Phil decided to move to a full-time operation in my second season and I was one of the few who stayed on part-time before calling it a day. I was so pleased for Leeds, and Phil in particular, when they got promoted to the Premiership and won the Cup in 2005. He deserves so much credit for what he achieved in his first spell there and hopefully he can help get the good times back.

I was very proud to be selected for England in the Paris 7s a few weeks after Eve’s birth and my last game for Orrell, finally realising my dream to represent England B in May 1995, just when I thought it was never going to happen.