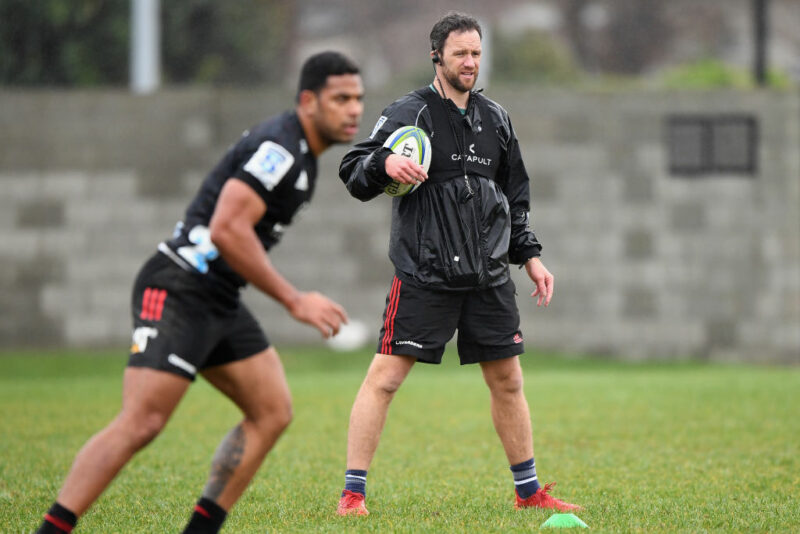 How far would you be prepared to go to further your career and gain the experience that could one day land you your dream job? Well, try 12,000 miles!

That the distance Mark Jones has dragged his young family after finding the coaching doors in Wales shut firmly in his face. My old Welsh wing partner cut his teeth as a coach at Llanelli, worked with Wales, had a year at Rotherham and then spent three seasons at RGC 1404.

But there was no room at any of the four regions to accommodate his obvious talent and so he joined forces with Phil Davies to help out Namibia at the World Cup in Japan. But that wasn’t far enough for him to go to further himself. Now he is in the hottest of hot-beds of rugby in New Zealand, acting as defence coach for Super Rugby champions the Crusaders.

It begs the question, what did Scott Robertson, the Crusaders’ head coach, see in Mark that nobody spotted here in Wales? That’s now history and all I hope is that someone at the WRU, as well as each of the regions, is monitoring Mark’s progress – and that of Jonathan Thomas at Bristol, Dwayne Peel at Ulster and Adam Jones at Harlequins.

Being a Welsh coach used to give you the same kind of calling card in the Seventies as it does these days with anyone who has a Kiwi accent. Has Welsh coaching lost its mojo?

In the 25 years of professional rugby, Wales have won four Grand Slams, another Six Nations title and reached two World Cup semi-finals. The 2005 Grand Slam came under Mike Ruddock and the 2013 Six Nations title was won with Rob Howley in charge. The other successes all came when Warren Gatland was head coach.

Gatland’s reign from 2008-2019 saw him take charge of 125 games – Howley (20) and Robin McBryde (6) stood in when he was recovering from his fall and on British & Irish Lions duty – which is more than all the Welsh coaches put together in the pro-era. The figures make interesting reading:

As a player, all I ever wanted was the best possible coach to work under. Gatland was amazing, Lyn Jones was often insane and extreme, but probably ten years ahead of his time, and I really admired Steve Tandy’s work ethic and Sean Holley’s style. It didn’t matter to me where they came from, it was only about what they could do for me and my team.

The Ospreys were always open to giving young coaches the chance to work in their environment and move up the chain. Sean Holley did that, as did Steve Tandy. Jonathan Humphreys, now the Wales forwards coach, was another who started there. And that’s the key – opportunity.

I felt for Ioan Cunningham recently when he was moved on by the Scarlets, as was Ceri Jones at the Dragons. Jason Strange went the same way at Cardiff Blues. All three are excellent coaches who just needed the chance to grow.

Too many coaches are consigned to the scrap heap far too soon. We’ve seen Lyn Jones, Kingsley Jones, Paul Turner, Phil Davies, Nigel Davies, Dai Young all come and go as head coaches at the Welsh regions. Now we have two Englishmen, a Kiwi and an Aussie in charge, albeit with a number of Welshmen beneath them.

Unlike in football, if a coach is sacked in rugby he seems to be viewed as an abject failure who is not worth another chance. I’m not sure how many times Jose Mourinho or Carlo Ancelotti have re-invented themselves to take over another plum job in football, but getting the sack has never seemed to dent their chances of being re-employed.

But let’s get back to Mark Jones. I think he is deserving of the highest praise for uprooting his family, taking them to the other side of the world in a bid to better himself. He will return a better coach and better equipped to take the next step in his career.

The big question is will anyone give him the chance he may well deserve?