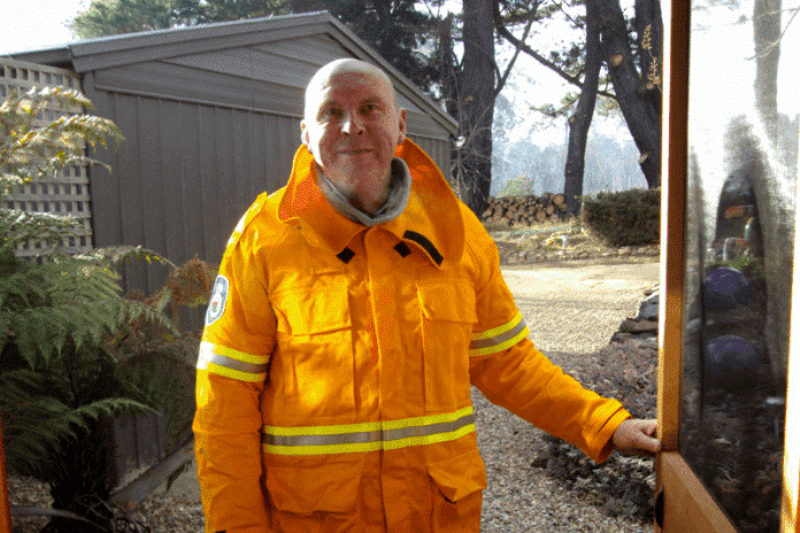 On Friday, February 17, 2017, Keith Lyons awoke before dawn to an alarm call from the Fire and Rescue Service in Braidwood, a 19th century gold-mining town 150 miles south of Sydney.

Within an hour, he and two other volunteers were confronting a bushfire scorching anything and anyone in its raging path. The trio had been called out to prevent the inferno engulfing a property occupied by a pregnant woman and her four children.

By the time the Carwoola fires were brought under control two days later, eleven homes had been incinerated, twelve more damaged but hers had been saved intact thanks to the skill and courage of the firefighters. The crew included a pioneering Welshman long acclaimed as ‘The Godfather of Sports Technology’.

Lyons blazed a trail followed by a coterie of renowned coaches on a global scale.

He was so good at inspiring those in charge of international teams to find their way out of the tightest corners that the Australia Institute of Sport poached him to run their Performance Analysis unit.

Fifteen years later on that Friday morning, the trail-blazer found himself endangered by a force of nature blazing a trail right at him. In his understated way, Lyons did confess that the experience reduced him to tears but left it at that.

Scott Hart, the captain of the Braidwood crew, used the same unvarnished language when he told me how they stood between the flames and the house that Friday on the longest day of their lives.

“We used what little water we had to guide the fire round the house,’’ he said. “Our initial tactic was to slow the fire down but when that didn’t work we changed tack and drew in close to the house.

“The fire was coming at us from all directions as the wind changed. The people in the house were nearing the end of their tether.

“The lady was six months pregnant and she begged us: ‘Please, don’t go.’

“We used our rake hoes to make little firebreaks. We just kept digging until the danger passed. Keith would draw on his experience of talking to ‘his coaches’ as he called them and that was a big help on a very tough day.

“Keith was a real student of the human condition and I’m damn proud that he thought so much of us. We just did what we needed to do and found a way.”

A bricklayer’s son from Buckley in Flintshire who played fly-half for London Welsh and Rosslyn Park, Lyons made his breakthrough in suitably Spartan conditions at Cardiff Met University.

“Keith started with a video recorder which was kept in a broom cupboard in B block at the Cyncoed campus,’’ said Dave Cobner, the university’s former dean of sport. “Now there are 30 work stations occupying most of one floor and the course he started has earned a global reputation for excellence.”

Lyons began recording matches in 1978, a practice unheard of at the time. He saw things other coaches couldn’t see, a microscopic vision recognised by Wales in the final years before professionalism. In 1991, they made Lyons rugby’s first full-time video coach.

Over the next seven years, he worked under three head coaches: Alan Davies, Alec Evans and Kevin Bowring. “He was my ‘thinking partner’,” Bowring wrote in the Guardian. “A kind, gentle, caring and sensitive person with a wonderful sense of humour.”

Alun Carter, the former Wales flanker who succeeded Lyons as part of Graham Henry’s administration, said: “Keith opened my eyes to a whole new world. If it hadn’t been for him, I could never have done the work I did with Wales.

“There’s a great quote which Keith was fond of using: ‘I am a tee-total, vegetarian pacifist who would let his own car tyres down to avoid trouble.’ He always had a bucketful of positivity and an intellectual capacity which made him unique.

“The thread of virtually the entire history of performance analysis in any sport goes back to what Keith and Dr Michael Hughes created at the Cardiff centre. We all owe both so much.’’

The caring side of Lyons had been reinforced by a family tragedy. His younger brother John, a goalscorer of some repute remembered at Wrexham and Millwall as ‘the life and soul of the party’, took his own life at the age of 26.

His death had such a profound effect on Keith that he became an influencial figure in promoting Australia’s suicide prevention charity R U OK? ‘encouraging people to connect with someone they care about and help stop little problems turning into big ones’. As head of sports studies at the University of Canberra, Professor Lyons discovered a problem of his own while sitting an exam aimed at promoting him from a senior firefighter in charge of a crew of five to a captain in charge of 125. His ‘confusion’ led to the detection of a brain tumour.

On the day last December when the horrific North Black Range fire came within a kilometre of his home in Braidwood, Lyons went into hospital, ‘devastated’, according to son Sam, at being unable to risk his life with Captain Hart and the rest.

Keith Lyons died last month within a week of turning 68. The funeral service at Norwood Park Crematorium, reduced to comply with social-distancing, provided inspiring examples of how his work as a self-styled ‘educational technologist’ had helped a wide range of international coaches, including Stuart Lancaster, not least in his current role as a cornerstone of Leinster’s rise as the best non-Test team in the northern hemisphere.

In a tribute read at the service, Lancaster said: “I have met many people but few, if any, have had the impact of Keith. He was always there for me, no matter what. Just when I needed somebody to talk to, he would send an email. Just when I needed to make a decision he would appear – Sydney, Dublin, Leeds, London. It was truly amazing the support he would give for coaches he mentored. His legacy will be there for generations to come.’’

Paul Farbrace, England’s assistant cricket coach formerly in charge of Sri Lanka’s Test squad, appeared by video link, offering an insight into Lyons’ work. “He never told me what to do but he always left me with a clear plan of what I needed to do.

A light bulb would come on three or four weeks later but he left me to find the switch. We had 20 years of friendship. A great man, a great teacher. Just a great person.’’

Captain Hart was there in full fire-fighting battle fatigue. “The planet,’’ he said. “Has lost a real good bloke…’’