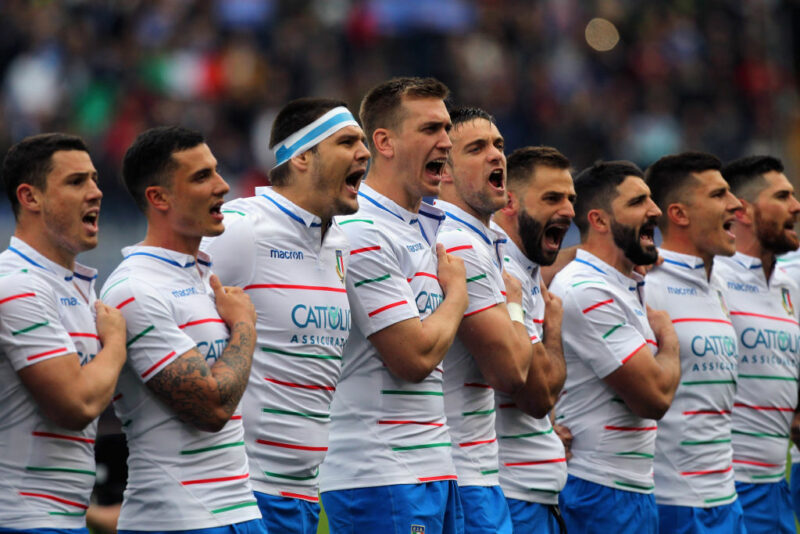 Started as an ordered-up corporate anthem for RWC1991 and we all rather sneered but has stood the test of time and we would miss it dreadfully at World Cups now.

The basic melody is borrowed from Holst’s the Planets and the Jupiter section while the rugby friendly lyrics were added by Charlie Skarbek.

Commissioned for RWC1991 and with Dame Kiri Te Kanewa giving it her best shot and with England getting to the final it reached No.4 in the charts.

Shirley Bassey and Bryn Terfel gave it heaps in 1999 and Hayley Westenra did likewise in 2011 but – and I appreciate I might be on my own – I prefer the much edgier version Paloma Faith offered us in 2015.

I have no idea how this primary school ditty became a regular feature of games at the Arms Park but the thing about great anthems is that everybody needs to know the words – even after a gallon of Brain’s SA or London Pride – and let’s face it the lyrics aren’t that challenging or profound!

Mary-Ann has hurt her finger,

And David the servant is not well.

The baby in the cradle is crying,

And the cat has scratched little Johnny.

A little saucepan is boiling on the fire,

A big saucepan is boiling on the floor,

And the cat has scratched little Johnny

A favourite at Corrie concerts for decades and was strangely first adopted as a team song by the 1974 Lions whose Scottish wing Billy Steele had a fine voice and sang it regularly on the team coach.

Its debut as Scotland’s official anthem came when they used it to stoke the fires before the 1990 Grand Slam game with England which was apposite as the song is aimed at the English!

“O flower of Scotland; when will we see your like again; That fought and died for; Your wee bit hill and glen; And stood against him; Proud Edward’s army; And sent him homeward; Tae think again”

Works brilliantly when played at a jaunty tempo, which is how the Corries performed it live it but can become a bit of a dirge if the band let the tempo slow or the crowd start lagging.

Particularly dramatic when the pipes band stop mid-song and let the 67,000 at Murrayfield complete the anthem unaccompanied.

There is no logic as to why certain songs are adopted by a set of supporters and swing low is the ultimate example of this. It was written by Wallis Wallis, a freed slave in the USA in 1865 and was a popular negro spiritual of long standing for many decades and an anthem for the Civil Rights movement in the 60s.

Then rugby moved in… initially the simple words made it a straight forward sing-along which rugby, in its beery way, then embellished with a few hand actions, inluding a rather crude one.

Fast forward to the Middlesex Sevens in the 70s when, after a day on the lash, the crowd took to singing its favourites ditties in the long break between the last semi-final and final.

This always included Swing Low with the PA announcer Peter Yarranton leading both the singing and hand actions.

Then fast forward again to 1988 and the Ireland match at Twickenham when Chris Oti becoming the first black player to represent England in over 80 years. What’s more he sparked a second half comeback with a cracking hat-trick.

The well lubricated Twickenham crowd, with many Middlesex Sevens regulars in attendance, wanted to show solidarity on the delicate race issue to their new hero and Swing low was what they came up with. A civil rights song for a new ‘black’ hero.

In no time it was England’s go-to song. Much recorded, for me the UB40 version is the best, still sing-along but not ignoring the song’s roots.

I will hazard a guess that there is not a single rugby fan in the world who hasn’t at least hummed along to this wonderfully catchy and uplifting Italian anthem which always brings a smile and makes your heart beat faster.

Alas, in recent years it has too often been the highlight of Italy’s afternoon. A song originally about the unification of Italy, it was composed by Michele Novaro in 1847 and was a favourite among opponents of fascism in Italy during WW2, hence its adoption as the anthem after the war.