Posted on 18th May 2020 by admin in Featured, Features, My Life in Rugby 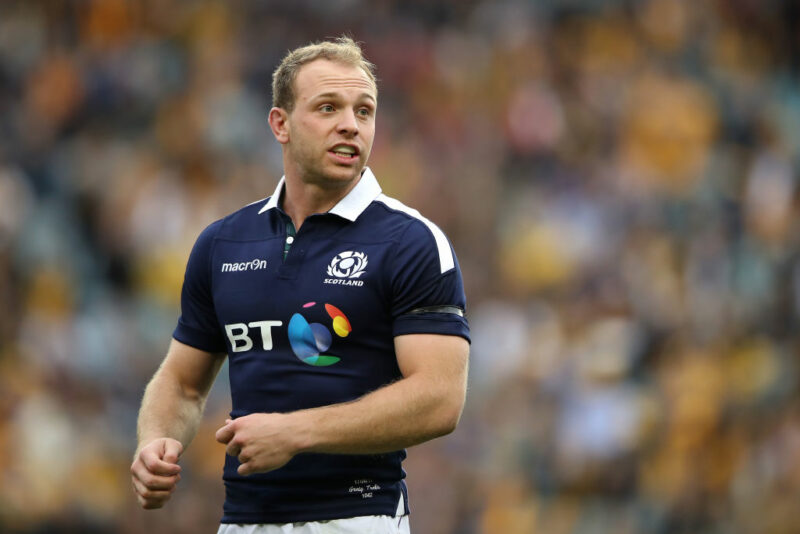 The win in Australia in 2017 was undoubtedly the highlight of my career – I didn’t anticipate even getting on the Scotland tour because I was playing in the Championship with London Irish at the time. So, to get picked for the tour, picked for the big game on it, to win (24-19), as well as score my only Test points, made it very special.

A penalty early in the game gave me the chance to take a long-range effort at goal. I thought this is either going to be a cracking start, or a pretty bad one. Thankfully, it sailed through. Hamish Watson scored in the corner just past the hour and the last ten minutes we hung on for dear life. It was an incredible experience.

That was my second and last victory in a Scotland jersey, as my eighth and final cap came in Suva later on that tour – not a bad place to bow out – even though the result went against us. Fiji is a beautiful place and the people were so welcoming and kind.

The game against Fiji was similar to my international debut against Samoa, four years earlier in a quadrangular tournament in South Africa – very physical. My overriding memory of that game was the damage the Samoans inflicted on us, with multiple injuries as the game unfolded. I was frustrated we didn’t get a better result and at my own performance, because that game tarnished the coaches’ view of me, and I didn’t play again until the following year’s Six Nations.

Although I only had a short time with Scotland under Gregor Townsend, I was very impressed. He is big on detail and very technical – someone who can create and deliver a clever game plan. I learnt a lot from him and it was good to get an insight into how he saw Scottish rugby going forward.

Throughout my career I played in a few different positions – full-back, fly-half and occasionally centre. I look back now and sometimes think, was it good or bad that I was seen as being versatile? It has its upsides, but it often means you become a good person to spend time on the bench, as cover, which isn’t want you want as a player, you want to start every week. Coaches want to know what your best position is and what you can offer so it can be detrimental. You can become known as a Jack of all trades and master of none.

When I left school, I joined Leicester, where I spent three years. I broke into the first team squad but in the same year I tore my ACL which took a while to recover from and impacted my chances of games and a new contract.

While at Leicester, I played a lot of rugby on loan at Nottingham. Having grown up in the area and played my junior rugby at Newark RFC it worked well for me. I loved my time at Nottingham, they had a great set-up under Glenn Delaney, a great bunch of people and players involved in the club, and they certainly enjoyed their socials. The game time and exposure was a big stepping stone for me, as well as a few other guys who also came down from Leicester at the time, Tom Youngs and Matt Smith to name a couple.

When Dusty Hare left Leicester to go to Northampton, he invited me down there. It was a good time to be at Saints with the club flying under Jim Mallinder, reaching the semi-finals of the Premiership and the final of the Heineken Cup in 2011. I was only a travelling reserve for the big game against Leinster in Cardiff, but it was good to be part of that environment.

I was approached by Edinburgh after we played them in the pool stages of the Heineken Cup to consider a move there. I went up to Murrayfield to have a look around on the same weekend they were playing Toulouse in the Heineken Cup quarter-final in front of 40,000 people. I was sold. I loved the city and I wanted to pursue playing for Scotland, where my Mum is from. Edinburgh is a great place and I didn’t think I’d ever move after that.

Coach of Edinburgh at the time was Michael Bradley, who I got on very well with and he had some great ideas around how the game should be played, but we didn’t get the results we should have. In my four years there we saw a number of coaches come and go, with varying success. A highlight was reaching the final of the 2015 European Challenge Cup, only to narrowly miss out to Gloucester.

In my fourth season I grew frustrated with the way things were going. It was attritional rugby, albeit with some success, but it felt like only a short-term fix. I was playing most weeks, but so many quality young players weren’t getting a look in and it seemed completely unsustainable.

Glenn Delaney was at London Irish and approached me about a move to London. I knew it was a difficult time for them, but I just saw it as an opportunity to play Premiership rugby. It was a rollercoaster four years with two relegations, two promotions and lots going on behind the scenes. I have some very good memories, however, like my first experience of a Paddy’s Day match – a win against Gloucester in front of 25,000 fans at the Madejski.

One of my most enjoyable years in rugby was under Nick Kennedy and Paul Hodgson (‘Dodge’) at Irish. They created an environment in which the whole squad was engaged and invested in their plan. The atmosphere was always positive and it was a shame to see them move on, when in reality our struggles as a team were down to the depth of the squad rather than the coaches. As a backs coach, Dodge was one of the best I’ve come across. So much energy and enthusiasm but loads of technical detail too. Would be good to see him back in the game.

I’ve no regrets finishing when I did, last summer aged 30. I’m hugely grateful to have experienced what I did and while there are of course parts I miss, I think I may have timed it right. I now work in foreign exchange for a private bank in London, something I’d been working towards in the last few years of my career. The new world is very different, but there’s a lot to like. Not least free weekends and being able to take control over my schedule, much needed with a baby on the way!