The RFU have treated the Championship disgracefully, Nottingham’s chairman explains 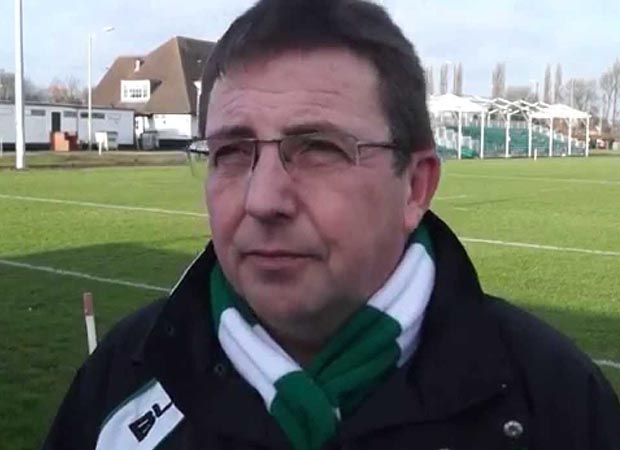 FOR the last decade it has seemed that the game outside the 13-club Premiership cartel does not register in the RFU’s list of priorities, and Nottingham chairman Alistair Bow has had enough.

Bow says that the way that Championship clubs like his own have been shunted into the sidings, along with the 2,000 community clubs that are the main constituents of the English game, represents a dereliction of duty by the RFU.

It is why he is calling for root and branch reform of the structure of Rugby Union in England following the coronavirus suspension.

Bow believes that the current administration at Twickenham has been “an absolute disgrace” in its handling of financial measures to support clubs through a difficult period in which many have seen their income vanish.

Bow, who is a 54-year-old entre- preneur with businesses in highway construction, commercial property and farming, castigates RFU executives for leaving clubs in dire straits while awarding themselves – and England coach Eddie Jones – massive annual salaries.

He described the news last week that Jones would get an increase to £800,000, making him by far the highest-paid coach in the world game, as “staggeringly insensitive while clubs are in danger of going to the wall”.

Bow, whose Nottingham side finished sixth in the truncated Championship league table finalised last week, says it is not just the second-tier pro clubs who are being short-changed.

He argues that the community clubs are in the same boat because the Premiership monopolises not just the vast majority of the media coverage given to Rugby Union in England, but the same proportion of the money.

Bow says that the latest evidence of this, following RFU chief executive Bill Sweeney’s decision to slash the cash to the Championship from £534,000 to £288,000 in February, is the abandonment of the swathe of community clubs in the leagues below it.

“What went on before the virus was despicable, but now, outside the Premiership everyone has been left to fend for themselves by the RFU. It is an absolute disgrace. If the RFU executives can’t do the job, they need to stand aside for people who can.”

Bow calls for the RFU Council to oust the current administration – which has backtracked in the face of fierce opposition by reducing the Championship cuts to £135,000 for two seasons – and says his views are shared widely.

“I would say that 90 per cent of Championship clubs feel that way, although only 30 to 40 per cent will say it publicly.”

He points out that the additional payment two years ago, which took each Championship club’s annual funding to just over half a million, was contingent on them signing a participation agreement split into achieving various criteria.

This included abandoning the play-off system – which Bow regrets deeply, not least because it was a counter-weight to the system of unequal funding where promoted Championship clubs get about half the £7m the Premiership clubs receive.

Bow recalls: “In truth, we were bullied because we were at the risk of getting nothing – and we got slightly more if we removed play-offs.

“At the time a lot of Championship clubs, like Nottingham, were haemorrhaging cash, but looking back it was probably a massive mistake – and commercially a very bad decision.

“Promotion-relegation is essential for the future integrity of the sport, and I’ve never changed my mind on that.

“Play-offs with promotion and relegation at stake have huge appeal to rugby fans, as Bristol v Doncaster in 2018, and before that Exeter v Bristol, proved beyond doubt. It is something that only sport can achieve in terms of excitement – and upset – and the drama is something you don’t get in any other arena.”

Bow says it is time the RFU insisted on scrapping the funding handicap to Championship clubs which win promotion.

“You cannot have a promoted club which is not treated with equality in terms of every club having exactly the same central funding – and they should know what it is. If a team are in a position to be promoted then the rules of the Premiership should be circulated, and the funding has to be equal.

“All of us in the Championship should have sight of the rules in a system which is totally open and transparent. I feel that a lot of the information we have asked for from the Premiership about such matters as funding, the voting system, and the shares system should be a public document.

Asked what he believes the level of Championship funding should be now, Bow’s reply underlines that his view of the league’s place in the English club matrix reflects common sense rather than the air of entitlement that permeates the Premiership.

Bow says that what is even more difficult is that the RFU have no coherent plan for the club game. “The issue is more to do with where the Championship fits in the RFU strategy – and I have never seen any sight of a strategy either before or since the cuts!

“If the RFU do not want a second pro league the funding could be less – but you cannot have a funding model unless you have a strategy.”

He adds: “Bill Sweeney has made sweeping cuts, and we think it’s all to do with cost-cutting, even though he says it is not.”

Bow argues that if Sweeney wants to save money there are much better ways of doing so. “Why are we throwing EQP (English Qualified Player) money at clubs when the regulations are nowhere near tough enough in penalising those who do not develop English players? That applies to the Premiership and Championship. The Championship should be overwhelmingly about developing English-qualified players rather than bringing in overseas players which are no benefit to the national side.”

Bow points out that Nottingham have never failed to meet EQP targets, unlike some clubs.

He says that Championship medical insurance is another criterion which has been mismanaged by the RFU.

“Even though we were given some money for medical insurance, I argued that the Championship should be no different to the Premiership – whose clubs receive medical insurance funding for their players via the RPA, which is paid by the RFU.

“I thought this was saying to us that the medical welfare of Championship players was not treated by the RFU as equal to Premiership players – yet they were putting their bodies on the line in the same way.

“When we asked the RPA why Championship players could not be included in the scheme they said that the RFU would not cover the funding.”

He says former RFU chief executive Ian Ritchie failed to rectify the situation. “In one meeting Ian Ritchie said he would take it on board, and like a lot of things he never came back. Others at the RFU, like Rob Andrew and Nigel Melville, did the best they could, but I don’t feel their requests were being listened to.

“The other criterion was ground facilities/development, and I’m not aware that any Championship club did not meet those targets.

“To have that funding removed without any prior notification on the basis that we hadn’t achieved some RFU internal targets was a cost-cutting smokescreen. I also believe that the (Premiership) A league played a part in this, with Championship funding cuts potentially going to support it.”

Bow says that the benefits the Championship has brought to the development of the English professional game – including a steady flow of international players, coaches and referees – has been well documented.

He believes also that this developmental role is now in jeopardy. “With these cuts the Championship will become not so much semi-pro as part-time, and that will mean that the preparation for players for the professional level will just not be adequate. That’s Nottingham’s view of where the Championship will sit in a few years time.”

However, Bow says that because the coronavirus pandemic “has changed everything”, it can bring about necessary reforms in English rugby.

“This is the opportunity for the RFU to start again, with a complete overhaul. We have never had a clear strategy for all the leagues based on what is best for the game here. There is no sense in carrying on as before, and we need another route, not just for the Championship, but for English rugby as a whole.

“Until the RFU appreciate the benefits of a proper domestic league structure I believe English rugby will continue to underachieve – but I don’t believe the Premiership will buy into it.

“We have an opportunity now to restructure rugby for the future. Many say you cannot turn the clock back, but you can. There is nothing set in stone.

“It’s time that the RFU got all the clubs, Championship along with Premiership and representatives from the National Leagues, to map a future for English rugby following this serious situation.

“It needs everyone to buy-in, because we cannot carry on as if nothing has happened. Now is the time we must work together.

“There are solutions, and although they will never fit all parties, the RFU are there to make hard decisions for the benefit of English rugby, not for individual clubs or owners.”

Alistair Bow brings a straight-talking honesty, clarity and purpose in this vision for the game in England. Whether the current RFU administration can match it is in doubt.