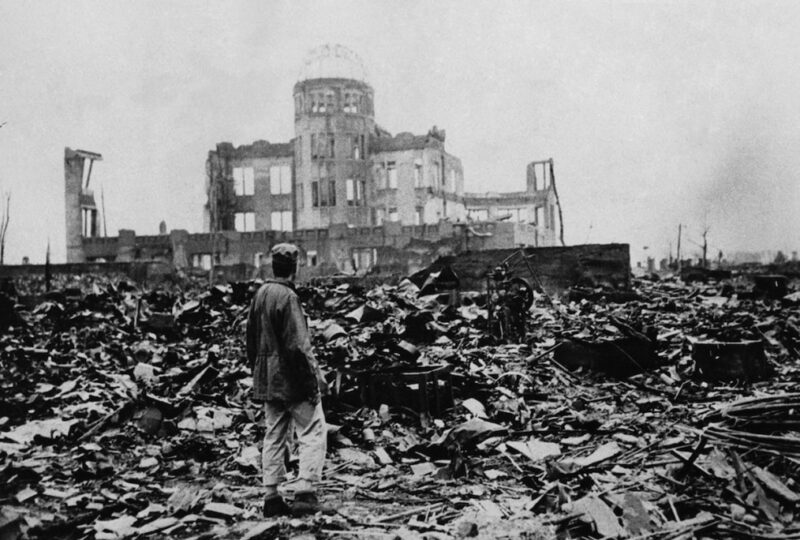 They began queuing in the rain at the Peace Memorial Park first thing on Friday morning, global pilgrims to the place where a blinding flash of light turned an entire city into a vast crematorium.

Since it opened in 1955, more than 75 million have been to pay their respects, among them a trio of US Presidents. Hiroshima estimates that by the end of this year the annual figure could reach record proportions of 1,600,000-plus – more than the cumulative attendance for the World Cup.

On Friday, like every other weekday, Japanese schoolchildren, satchels strapped to their backs, joined what seemed an endless procession to the Children’s Peace Monument. They sang and bowed their heads in homage to another schoolgirl, Sadako Sasaki, who died at the age of 12 from leukemia.

The Hall of Remembrance, built around 140,000 tiles, one for each of those incinerated by the atomic bomb, does not include Sadako. A post-war survivor, she was one of the Hakusha, those who died as an indirect consequence of the explosion.

The Cenotaph, ‘an arched tomb for those who died from the blast or exposure to radiation’, bears a register of the names of more than 220,000. They include every single member of the Dalichi Girls’ High School, all 676 pupils and teachers killed at 8.15am on Monday, August 6, 1945.

The devastation made President Truman’s warning to Japan in the face of their repeated refusal to surrender sound like an understatement: “A rain of ruin from the air, the like of which has never been seen on this earth.”

Of almost 50,000 properties reduced to rubble, Hiroshima’s resurrection centred around the one that stayed upright, the Genbaku Dome. Above all, it stands as miraculously enduring symbol of Hiroshima’s spirit.

And yet a city almost wiped off the map 74 years ago has not been seen fit, for whatever reason, to host a single match in Japan’s rugby jamboree. “There is something about Hiroshima that is compelling,’’ says the Rugby World Cup. “Making it one of the highlights to visit during the tournament.’’

Not compelling enough to merit a fixture. Another recommendation, from England Rugby Travel senior event operations manager Marcus Neal describing Hiroshima as “a must visit for anyone visiting Japan”, makes its omission sound stranger still.

This is a city that prides itself in being “perhaps the nicest and friendliest in all Japan”. The fascist regime running the country during the Second World War has long gone, along with its condemnation of rugby – “fighting ball” – as a foreign sport. By 1943 most of the nation’s rugby players had been killed.

The city has a J-League football club and a baseball ground rebuilt from the ashes of the old one located close to the hypocentre of the bomb. In 1994, Hiroshima hosted the Asian Games at the all-seater football stadium with room for 36,894.

Proposals for the financing of a bigger stadium in March 2016 were designed to “enhance the promotion of Hiroshima’s message of peace”. Not surprisingly, questions are being asked as to why the World Cup is passing it by.

The party line from the tournament organisers, that Hiroshima “did not apply”, begs other questions, not least whether they were encouraged to do so. If ever one potential venue deserved special treatment, it’s this one in the south-west of the country.

Had any of the other 19 finalists seen fit to pay it a visit over the course of the last three weeks, they must have done so without anyone noticing. The pot of gold did come here, in the hands of former Japan international Kensuke Hatakeyama on a fleeting promotional visit to two schools in early July.

“I feel very honoured to have introduced the Rugby World Cup trophy to the people of Hiroshima,’’ he said. “I think the people are recovering from the (flooding) disaster last year and I really hope they can move forward as a team, just as we would on the rugby field.

“I hope today has excited everyone here and I would encourage everyone to be part of this once-in-a-lifetime event by going to matches or watching on the television.’’

Those words merely strengthen the impression that World Rugby have missed a trick, that Hiroshima has somehow been short-changed. It would, and should, have been a perfect fit for the universal rugby anthem of a World In Union.

If it is true that Hiroshima did not present itself as a potential venue, then someone somewhere along the chain of command ought to have recognised that one game was the very least they deserved. The USA, in the city it almost blew to kingdom come, would have been a mighty but not insurmountable challenge to rugby’s restorative capacity.

The chance of a lifetime has gone. The must-visit Japanese city will watch the remainder of the World Cup as they have watched it hitherto, from a distance. But then this place where the kids smile and wave has set itself higher goals for the sake of mankind.

As the epitaph at the Cenotaph says: “Let all the souls here rest in peace: for we shall not repeat the evil.” These words express the spirit of Hiroshima – pursuing harmony and prosperity for all and yearning for genuine, lasting world peace. “We pledge to learn the lessons of history and build a peaceful world free from nuclear weapons.’’

The Peace Flame here has been burning since it was lit 55 years ago and will not be put out until all nuclear weapons have been destroyed and the threat of Earth’s annihilation has been removed from the planet. The museum’s narrative claiming the existence of “more than” 10,000 nuclear weapons suggests it will burn for some time to come.

As a post-script to this column, I must declare a personal interest. I only ever had one Welsh uncle, Vernon Prosser, an exceptional all-round athlete who captained Richmond Grammar School’s 1st XV and 1st XI. My grandfather, a humble man never given to idle boasting, thought his only son was destined to play rugby for Wales.

On July 23, 1945, two days after his 21st birthday, Pilot Officer Prosser took off from Ceylon in a Liberator of 203 Squadron, RAF. He and the rest of the 11-man crew, from Australia, New Zealand and Britain, were killed in action over Sumatra, shot down by Japanese anti-aircraft fire.

Two days later, on July 25, 1945, President Truman ordered the atomic bombing of four Japanese cities short-listed for annihilation. After a test in the desert of New Mexico, one of the American scientists behind its construction, said: “My God. We’re going to drop that on a city…’’

Twelve days after Truman’s decision, Captain Paul Tibbets was flying to Hiroshima as pilot of the B-29 Enola Gay, named after his mother. Almost seven and a half decades later, people of all ages still head for the hollowed-out Dome, still asking why….