Jackson column: Johnny McNicholl will give North some competition 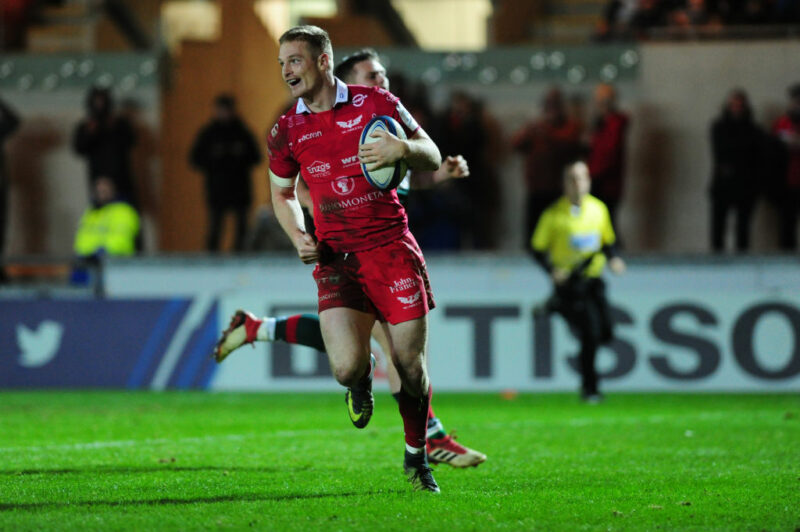 Five years ago Johnny McNicholl found himself surrounded by so many All Blacks that it must have seemed a mere matter of time before he became one himself.

A substitute wing for the Crusaders at the 2014 Super Rugby final, he belonged to a squad studded with no fewer than 15 current or future New Zealand Test players, 12 in the starting XV, three more on the bench.

McNicholl had rolled off the most productive of all assembly lines, the one reserved for wings and those, like Dagg and Damian McKenzie, able to double up at full-back.

Two years after the Crusaders had lost that final to the Waratahs by the odd point in 65, McNicholl chose to take what has turned out to be a circuitous alternative route into the Test arena. Another of the supporting cast from 2014, Willi Heinz, has already beaten him to it.

Just as the Gloucester scrum-half qualified for England through residence, so McNicholl has done the same for Wales, via the Scarlets. He will be available for selection from the friendly against the Barbarians in Cardiff at the end of the month.

McNicholl is a class act, a stand-out performer in the outstanding Scarlets’ squad whose brand of total rugby en route to successive Pro12-14 finals surpassed anything delivered by Wales.

Now that he is about to make the quantum leap from regional to national affairs, Wayne Pivac will await McNicholl’s imminent arrival with some relish. Nobody will be watching the newcomer’s every move with more of a vested interest than the super-heavyweight who has just completed ten years ever-presence as a Test wing.

George North, hamstrung during the semi-final against South Africa, ought to have recovered in ample time for Wales’ opening defence of their Six Nations title in February. Whether he is considered fit for purpose will depend, to a greater or lesser extent, on McNicholl.

Before hobbling out of the Springbok yawn, North described his World Cup as ‘mixed’. Some shrewd judges would not have said it was that good.

Leigh Halfpenny’s long-term injury saved Wales from having to choose between North and Liam Williams. At 29, McNicholl will be in a hurry to make up for lost time, all of which suggests that the competition for one wing place will do Wales a power of good.

That Wales are in need of rejuvenation is one factor which has been under-played. While Pivac will welcome the return of Taulupe Faletau, Ellis Jenkins and Gareth Anscombe from injury, he knows Wales will have to find a lot more than a new pair of centres for the next World Cup.

Jonathan Davies and Hadleigh Parkes ought to be good for two more seasons but, at 31 and 32 respectively, neither can expect to last until France 2023. Six more will have made their last stand on the global stage at Yokohama – Alun-Wyn Jones (34), Ken Owens (33 in the New Year), Aaron Shingler (32), Halfpenny (31), Dan Biggar and Justin Tipuric (both 30).