‘It’s a match made in heaven’ – Hogg on Exeter Chiefs

Posted on 1st May 2020 by admin in Club Rugby, Latest News, Premiership 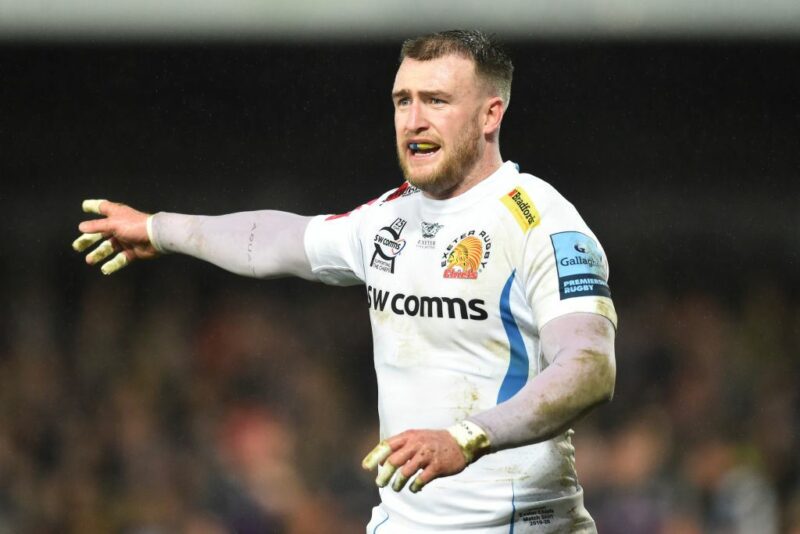 Fleet-footed Exeter full-back Stuart Hogg says swapping Glasgow for rugby-daft Devon is one of the best decisions he has ever made as he targets a place on next year’s Lions tour.

A whirlwind six months has taken Hogg from the lows of Scotland’s miserable World Cup campaign to the high of captaining his country during the Six Nations, albeit a campaign that was tempered by errors against Ireland and England and fallout from the Finn Russell affair.

However, now firmly settled in Ottery St Mary just outside Exeter and with things falling into place for club and country, Hogg cuts a more contented figure as he plots his career path with silverware at Chiefs, adding to his 76 caps and a third crack at the Lions firmly on his radar.

Hogg told The Rugby Paper: “I’m loving it here. Coming to Devon is the best decision we’ve made as a family and it’s been refreshing to experience new things. In terms of rugby it’s the best thing I’ve ever done and it’s a club I’ve fallen in love with straight away. We’ve a great group of boys playing a lovely brand of rugby and the fanbase is incredible, so it’s a match made in heaven.

“I’m learning a lot on and off the field. I have 76 caps but I’m a big believer that you’re never the complete player – there’s always a lot to improve upon individually that will help the team.

“We have guys like Gareth Steenson, Phil Dollman and Ben Moon who’ve been here a long time and I’m happy to pick their brains. There’s a cracking set of coaches as well who have a big influence on the way we all play and learn.”

He added: “When I came to Exeter the first thing you’re welcomed by on my side of town is a big photo of Jack Nowell saying, ‘Welcome to Exeter’. In Glasgow it’s all about football, but here it’s rugby daft and it’s brilliant that Chiefs represent the South-West.

“I’ve always been a huge fan of rugby and this is a place I had a keen interest in many years ago. To actually be here now and see how much the club means to the area is incredible.

“We have people coming from Cornwall for every game and we’re sold out most weeks. The fans are in the ground a couple of hours before the game and stay for a long time after the final whistle, so that’s great as well and I haven’t experienced half of it yet.”

While Hogg is confined to training alone, he is able to reflect on a Six Nations which saw him take the Scotland captaincy and banish a few World Cup demons from Japan.

“It was a huge honour,” Hogg says. “Gregor Townsend and I had some good conversations after the World Cup and I took a few weeks before going back to him with my thoughts on that – how we could kick-on again and get better after what was a disappointing tournament for us.

“I was asked for my thoughts on the captaincy moving forward and told Gregor that if he was ever thinking of a change, I’d like to put my name in the hat. We had more conversations about how I could get the best out of myself and the team and I’m very passionate about making a difference, so, as a proud Scot, to then get the opportunity to lead the team was incredible.

“I feel like I’ve dipped my toe into it now and I want to get better at it and make sure the team is constantly progressing. If I can help bring some stability in that place now, I’m sure we’ll keep kicking on because we had a few good results towards the back end of the Six Nations.”

Not everything was plain sailing, with Hogg admitting: “There were a couple of tricky performances first-up from myself and I wasn’t at my best with making a couple of high-profile errors against Ireland and England, as everyone keeps reminding me! But I felt I played some good stuff as well and the boys certainly did, so we were pleased with the way we bounced back from that.

“We were a bounce of the ball from beating England, were very close to beating Ireland and we put in a couple of cracking performances against Italy and France. Everybody says we should have got the bonus point against Italy but we scored three great tries and managed to keep Italy scoreless on their home patch, which was a huge achievement.

“I believed in the boys that we could back it up against France and we did exactly that. After the World Cup we’d identified defence as an area that wins you Test matches because last year we were having to score three, four or five tries just to be in with a chance of winning. We were leaking far too many scores and boys were getting stressed by the way we were defending in games.

“While we had a cracking coach in Matt Taylor, we let him down. With Steve Tandy coming in, he’s been a fresh voice and his philosophies suit the way we want to play, so that’s given us the confidence to hurt teams through our defence and results have followed. We see it as a strength of ours now and we need to kick-on and become an even tougher side to beat.”

Despite the emergence of Adam Hastings as an international-class 10, the absence of Finn Russell cast a shadow over Scotland’s campaign after a pre-tournament drinking session resulted in a broken curfew and Townsend’s decision to banish him.

Hogg insists the Racing 92 man will soon return, explaining: “Finn will be back in a Scotland jersey the next time we play. We were disappointed not to have him included in the Six Nations but what’s happened in the past is done. There was an opportunity towards the back end of the tournament for Finn to come back in, but the mutual agreement was it wasn’t the right time and Finn accepted things for the best of the team.

“When Finn comes back in he’ll add his x-factor and he’s a real leader within the team. It gave Adam Hastings an opportunity to show what he’s got, which will make Adam a better player and make Finn better too. We have good strength-in-depth at fly-half with Finn, Adam and Duncan Weir and if we all keep improving ourselves, we’ll be on the right track.

“Edinburgh and Glasgow were both in good positions in the PRO 14 prior to the coronavirus so there’s good depth within those squads, as well as  guys like myself, Sam Skinner, Chris Harris, Rory Hutchinson, Sean Maitland, Allan Dell, Byron McGuigan and Finn playing high-level rugby in England and France. It bodes well for Scottish rugby in future.”

Hogg is soon to be joined at Exeter by Scotland lock Jonny Gray, who will strengthen the Chiefs’ charge for silverware, in turn enhancing chances of Lions places next summer.

“Jonny only really spoke to me about it after he signed,” Hogg says. “I knew he was out of contract at Glasgow but he kept his cards close to his chest so it was great to hear he sees Exeter as the perfect place for him to improve.

“He’ll add a lot to the team, you can see from his tackle stats and work-rate what he offers and he’s a good talent. We’ll have some quality talent at lock and I’m very fortunate to be part of this team. There are lots of x-factor players in this squad and we’re very much in control of what we can achieve when we get back playing. I firmly believe we’ll win more titles in the very near future and I’m excited to be part of a special group of players.”

An early tour injury robbed Hogg of competing for a place in the Lions Test squad in New Zealand in 2017 – and he was a bit-part player in Australia four years earlier – but at 27, the Hawick-bred flyer is approaching his peak and would love a key role in South Africa.

Hogg added: “Every rugby player’s dream is to play at the highest level and I’m no different. I’ve got individual targets that will remain with me and I’ll continue to work really hard every day to get better, but while my primary focus is to help Exeter win trophies and the international stuff follows from that, I’ll be doing everything to fight for Lions selection.

“On the last two tours I’ve not had a big impact on what happened so I’d love to be there again and get another crack. As a lad growing up all I wanted to do was play for Scotland, so I’m living the dream. But I never take anything for granted and I’ll be fighting hard for cap No.77 – then I’ll take everything from there.”