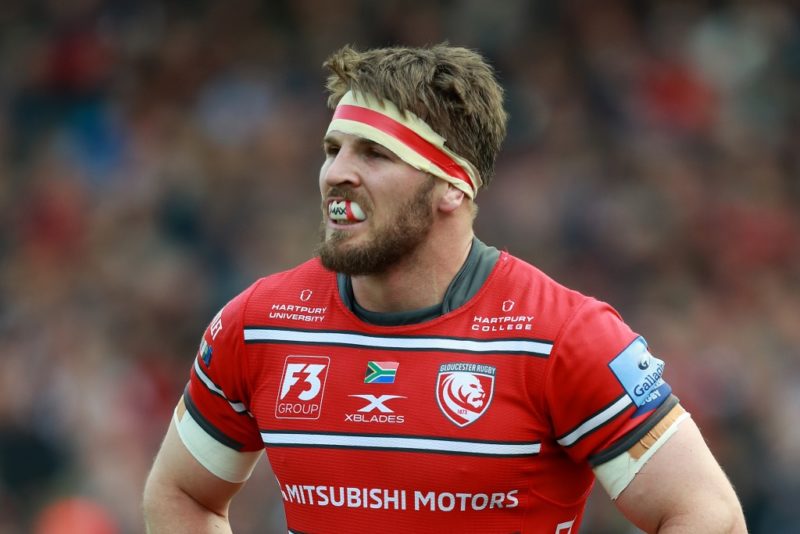 Back row ace Jaco Kriel insists his best is yet to come as Gloucester set about the task of chasing down Saracens and Exeter for a first Premiership title.

After overcoming a 14-month injury lay-off that required two operations, 11-cap Springbok Kriel made his Gloucester debut last November and then starred in the No.7 shirt as Johan Ackermann’s side made the play-offs.

Gloucester’s title dream was ended by eventual champions Saracens but Kriel believes they can go one better. He said: “I wouldn’t say the Saracens game was a step too far, last season as a whole was a step in the right direction.

“For the club to be in a top four position after so many years outside it was a good achievement. Not many of our players had experienced play-off rugby so it was a brilliant learning curve although we were beaten by the better side on the day.

“We feel there’s a lot more to come from us. Saracens and Exeter have been ahead of the field for a couple of years but our aim now is to beat these two.

“We have a stable squad that is developing. If we reset our goals and push each other hard, we can definitely go that extra step.”

On a personal level, Kriel added: “This is the first proper pre-season I’ve had since 2015, so I really need it to reach my peak. I didn’t play the rugby I wanted to last season and I just want to raise the bar and see how far I can push myself.

“Arriving at the club last summer from the Lions, I then had to wait another 12 weeks to get fully over my shoulder injury and make my debut. I wasn’t all that happy with how I played, though, so I feel I’ve got a lot to improve. Even though we reached the play-offs there were only glimpses of my best and I wasn’t that happy with my performances.”

Kriel is grateful for the support of Ackermann, who he once described as a father figure to him at the Lions and continues to be someone he can lean on during a time of personal hardship.

The 29-year-old lost his mother, brother and sister earlier in his life and last year his father was diagnosed with motor neurone disease – the same illness that claimed the life of compatriot Joost van der Westhuizen.

Kriel explained: “I had a good summer holiday with my dad and spent some quality time with my family. Having MND, things aren’t going to get any better for him, so personally it’s more of a mental struggle knowing I’m here and he’s back home.

“He’s the type of person who won’t really tell me how it goes or whether he’s getting weaker, he’ll just stay strong. You always feel a bit guilty but I believe in my heart he wants the best for me and at this stage of my life, that’s at Gloucester.

“It helps having Johan here, he’s a special coach. He cares a lot about the players and for him it’s all about the team environment. I’ve worked with him for a long time and I’ve got the utmost respect for him.”

Kriel would love to add to his 11 caps, the last of which came against Australia in September 2017 when he picked up his injury. In the meantime, he believes the Springboks are genuine World Cup contenders after winning the Rugby Championship.

He added: “I’d love to wear that shirt again and when you’re not part of that group you realise how much it means. All credit to the guys in there now, they’re working immensely hard and I’d say the Boks are definitely among the frontrunners to win it.”