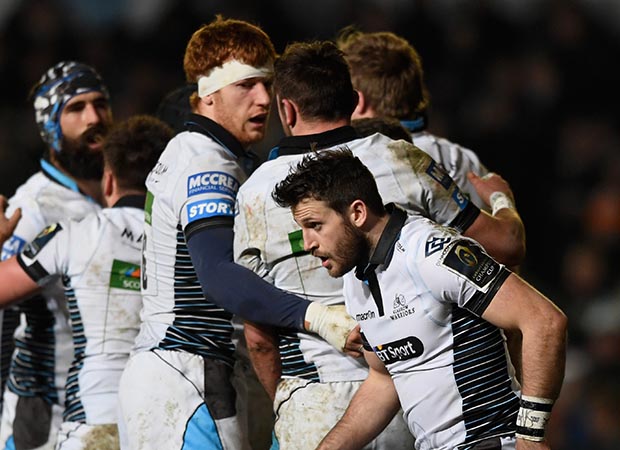 On a wintry Friday night by the Clyde, Glasgow Warriors and Newport Gwent Dragons played out a 16-all draw. So few turned up that they could have counted them, one by one.
They declared the official attendance at 1,709, hardly enough to qualify as a crowd. The lonely Warriors were about to get lonelier.  One month later, when Treviso paid their annual visit, the number at Scotstoun had shrunk to 1,369.
The home club were fighting to pay their way in hostile surroundings, eking out an existence in a city where two football clubs commanded crowds of around 100,000 between them.The Dragons came from a much smaller city but one where their rugby team pulled in twice as much support as the one football club.
Six years on, the tale of those two cities is very different as reflected by their contrasting fortunes. One has taken the high road into the last eight of the Champions’ Cup. The other is on the bones of its backside.
In Glasgow, every Warriors’ match this season has been a 7,251 sell-out.   At Newport, the Dragons’ support has been dwindling, from an average of almost 8,000 last season to 4,589. And that’s not all they have lost.
The conditions of the Welsh Rugby Union’s salvage operation at Rodney Parade, starting on July 1, require the names Newport and Gwent to disappear from the title. From next season, the Dragons will live or die on their own.
At a time when the future is distinctly bleak for Newport RFC as well as the Dragons, it could not be rosier for the Warriors. The clans on Clydeside began heading south yesterday for today’s European quarter-final at Saracens, massing in such numbers that it was just as well the English champions expanded capacity at Allianz Park by 50 per cent to 15,000.
By midweek the club said they had sold 5,500 tickets, not bad for a team that didn’t have a crowd to call their own not so long ago. The Warriors had a plan which, if it worked, would do for rugby what the Pied Piper had done for the rats in Hamelin.
Nathan Bombrys, a 42-year-old American from Michigan, arrived the season after that home draw against the Dragons as managing director.    “After about a month I did a presentation about what we were going to try to do over the next few years,” he said.   “I spoke about how I wanted to be part of a club that won the PRO12 and the European Cup.
“Some of the staff couldn’t believe what I was saying. There were a few involuntary reactions and some laughter.  When Gregor (Townsend) arrived shortly afterwards, there was a lot less laughter although I’m not sure there was total belief.”
There is now, with the PRO12 won and new ground broken in Europe as due reward for an adventurous 15-man brand of entertaining rugby. In trebling attendances, the Warriors have converted countless soccer fans.    Bombrys offers anecdotal evidence of how those who follow the Old Firm are also following the Warriors, in spirit at least.
“After we beat Munster at home in the PRO12 semi-final, the coaches went out for a few beers. Gregor got a taxi home and the driver says to him: ‘I’m a fitba man meself but have ye heard about that big win for the Warriors rugby team? They’re in the final. Isn’t that great for Scotland?
“Gregor didn’t let on who he was.   ‘Aye,’ he says. ‘I heard about that.   You’re right, it is great for Scotland’.”
What makes the contrast with the Dragons all the more pronounced is that while Glasgow has never watched a club rugby team in such numbers, Newport and Rodney Parade have been synonymous throughout the rugby world.
Now the club famous for many achievements, not least as the only one to beat Sir Wilson Whineray’s imperious All Blacks during their European tour in 1963-4, fear they may be put out of business as a consequence of the WRU buying the Dragons.
The deal will collapse unless Newport RFC members give it a 75 per cent approval at an EGM next month. One described a meeting with Dragons’ chief executive Stuart Davies as ‘a farce’ because of ‘no guarantee that we will be playing at Rodney Parade next season’.
While Newport and the Dragons spend another weekend on skid row, Glasgow and the Warriors will spend theirs among the European elite, with every neutral willing them to reach the semi-finals.