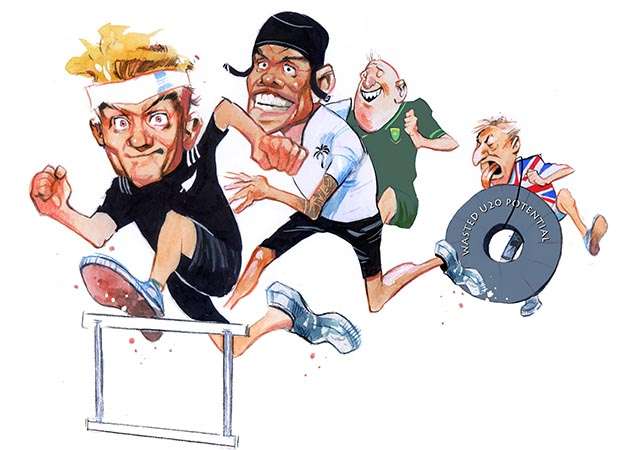 Here’s hoping that the GB Sevens side for the Rio Olympics which was announced last week come back from Brazil with a medal. If they do, it will be a huge achievement, because when it comes to organisation, planning, training, match preparation and star quality, the GB squad led by England Sevens captain Tom Mitchell have not been at the races compared to main contenders like Fiji, New Zealand, South Africa, Argentina and the USA.
The barebones of it are that England – who succeeded in securing qualification for team GB last year – have had a poor season leading into the Olympics, finishing 8th in the Sevens World Series standings. Scepticism over their chances in Rio stem from England’s failure to win any of the 11 tournaments in the series, even though there were seven different nations on the winner’s podium, including 10th placed Scotland, who won in London at the end of May.
Since then GB have been able to play together as a team only in the Europe Grand Prix series, which is of a significantly lower standard than the World Series. On the plus side, one of the two teams GB coach Simon Amor entered in the Exeter tournament last weekend did have the consolation of beating France 33-17 – although the French (ranked 11th) are hardly a world Sevens power.
Whether it will be enough to enable GB to prevail over the impressive Kenyans and Japan in their opening games in Rio on August 9 remains to be seen, but those games will be critical in securing a quarter-final place because GB are not favourites to win their final group match against New Zealand.
The surprising lack of fanfare for team GB’s bid to win Olympic Sevens gold reflects the lack of a galvanising plan. Instead of adopting the Lions model advocated two years ago in these pages by Mike Friday, it has been more a case of GB muddling through – hence their billing in Rio as unfancied outsiders.
The pathway through which 15-a-side stars like George North, Stuart Hogg and Christian Wade could have come into contention was never close to being constructed. This is chiefly because Joe Lydon and Rob Andrew, the two RFU mandarins responsible for England Sevens – and therefore main movers in the GB plan – were unconvinced by its merits.
Both Lydon (head of international player development) and Andrew (professional rugby director) have left the RFU recently, but their policy of contracting Sevens specialists – most of whom would struggle to secure a contract with a Premiership or Pro12 club – explains why there is only one current full international in the 12 man GB squad, in the shape of Mark Bennett, the Scotland and Glasgow centre.
They were also sufficiently unconvinced by the merits of Friday and Ben Ryan, both former England Sevens coaches, to tempt them with the promise of coaching the GB side at the Olympics. As a result the job went to the relatively inexperienced Simon Amor, an exceptional Sevens scrum-half who played under both of them.
While Friday was snapped up by the USA, quickly turning them into a burgeoning force on the world stage, Ryan has made headlines by becoming a cult figure in Fiji after winning the Sevens World Series in 2015 and 2016, and qualifying for the Olympics as top seeds.


The fact that both Ryan and Friday will be going for gold for nations other than GB – with Ryan on a mission to win Fiji’s first Olympic medal in any sport – speaks volumes for the mismanagement of the whole process. So does the failure to tap into the stream of talented players who have come through the England U20 side since 2012 – not to mention their counterparts in Wales and Scotland – by enlisting them in the Olympic quest.
In the last six years England have won the World Junior Championship title three times (2013, 2014 and 2016), and were runners-up twice (2011 and 2015), while Wales were runners-up in 2013. Yet, back rower Alex Gray, who captained the England U20s in 2011, is one of the few to feature for the national Sevens side – although he did not manage to make the Olympic squad and has joined Yorkshire Carnegie.
Given the lack of game-time in either the Premiership, or the Championship, for the vast majority of England’s promising U20 players it is staggering that the benefits of a season or two competing on the World Series Sevens circuit have been almost entirely overlooked.
Why haven’t players of the calibre of 2014 Junior World Champions like wingers Nathan Earle, Henry Purdy and Howard Packman, scrum-halves Henry Taylor and Callum Braley, fly-half Billy Burns, centres Nick Tompkins and Harry Sloan, and back rowers James Chisholm, Joel Conlon and Gus Jones been in the frame for Rio? What about centre Max Clark, wing Piers O’Conor, scrum-half Will Homer, or back rower Sam Skinner from the class of 2015?
It is a given that they would learn far more from playing in knife-edge competition in front of packed stadiums than spending weeks sitting on the bench interspersed with the occasional Premiership ‘A’ game or Championship run.
Much has been made of the specific conditioning required at elite Sevens level, and the difficulty of getting 15-a-side players up to speed in anything less than four months. Meanwhile, most of these former England U20 players have not seen much match-action for large tracts of the last two years. What a waste.