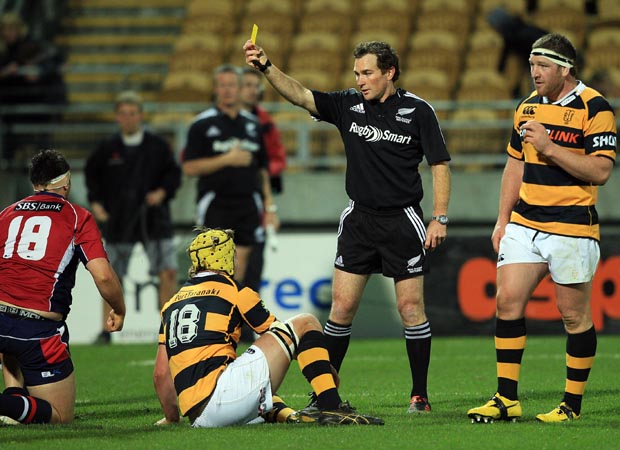 It doesn’t matter if you don’t penalise crooked feeds, or if you stuff up monumentally as a 2015 World Cup referee, the message from the World Rugby/IRB referees boss, Joel Jutge, is clear: Carry on regardless! What else can you conclude from the appointment of referees for the entire Pool stage of the 2015 World Cup announced this week? The reality is that by allocating referees for the four rounds of the Pools, accountability for poor performances has been forfeited.
Make a series of howlers in your first match, and the referees’ draw for Rugby Union’s showcase tournament gives you another two or three opportunities for a repeat performance.
This reflects a double standard at work in our sport. It means that while players and coaches are held to the highest of standards in playing, training, conditioning, technical analysis, discipline, diet, or any other area of professional Rugby Union you care to look at, referees are not part of the same picture. The rigorous assessment of performance in other parts of our sport simply do not apply to them.
The contrast with the accountability in World Cup football tournaments, or European Championships, is stark. In those huge profile round-ball tournaments referees are appointed only round by round, with their performances assessed on a game-by-game basis. This means that if they are below par, or make glaring errors, they will be dropped from the panel for a round, or possibly for the rest of the tournament.
If you want an example look no further than Graham Poll, the English referee who was considered to be the best in the Premier League by the FA, and went to the 2006 football World Cup in Germany with realistic ambitions of taking charge of the final.
Unfortunately for Poll he lost his bearings in Australia’s final group match against Croatia, forgetting to send off the latter’s Josip Simunic after giving him his second yellow card. In the end, Simunic was only red-carded and sent from the field when, after another foul, Poll realised he had given him a third yellow. 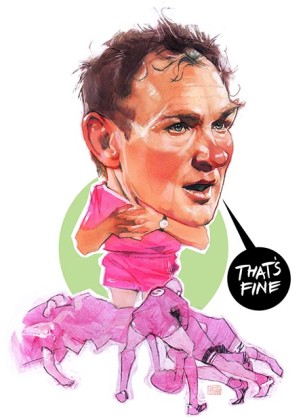 Poll did not get the chance to referee in the knock-out stages of the tournament, and, taking full responsibility for his mistake, retired as an international referee. If that seemed premature to many onlookers, it was Poll’s own decision based on how high he set his own standards.
By dropping him from the roster for the knock-out stages the football referee assessors showed they had similarly high standards. This is something that, at present, does not happen in the refereeing of the international game in Rugby Union.
Instead, it usually takes persistent behind-the-scenes lobbying by more than one of the leading national Unions to get a referee dropped from the international panel for inadequate officiating.
Rather than run a performance-based refereeing meritocracy, Jutge and his overlords at World Rugby – notably his French fellow-countryman, chairman Bernard Lapasset – have retained a system that has rewarded the bad every bit as much as the good since the game turned professional in 1995.
The slack refereeing assessment system in place for the 2015 World Cup is upstaged by the more exacting standards set recently by the RFU/Premiership. Last season appointments each weekend were contingent on assessments made by the refereeing panel the following Monday. Only after performances had been scrutinised were referees allocated for the forthcoming weekend’s round of Premiership matches.
Yet, in rugby’s showpiece global tournament we have an inexperienced referee like Glen Jackson, being handed three pool matches, Ireland v Canada, Tonga v Namibia, and USA v Japan, irrespective of the quality of his officiating. The New Zealander, who a few seasons ago was playing fly-half for Saracens, has had a meteoric rise as a referee – but there are legitimate concerns that the speed of his promotion has outstripped his ability to apply the laws.
Jackson’s refereeing in the Super 15 this season, and on the international stage, has been notable for his absolute tolerance of crooked scrum put-ins. A reasonable deduction is that he does not approve of the written Laws, or of the directive from World Rugby refs’ boss Jutge, that officials must clamp down on not-straight scrum feeds.
Jackson is one of a group of Test referees, the majority from the south but some from the north, who subscribe to the blinkered view that the scrum, rather than being the contest stipulated by the laws, is primarily a means of re-starting the game.
This attitude created a vacuum in referees applying scrum law, so that not-straight, early pushing, unstable engagements, endemic collapsing, and the decline of hooking, led to the degradation of the scrum as a contest. World Rugby/IRB took far too long to take remedial action, but by going back to the Law book over the last two seasons they have had partial success in getting the scrum working again.
However, it is only partial, because the likes of Jackson – with England’s Wayne Barnes another high profile offender – refuse to apply the scrum laws. Nor is the scrum the only area where officials go off-script. Why else would every international coach have a dossier compiled on the foibles of each elite referee?
Individual ‘interpretation’ of the laws by referees has to be reined-in, and the most effective way of achieving it is a more exacting system of assessment. If Jackson, Barnes, or any other professional referee, knew that their next World Cup match was dependent on their last performance, we might get somewhere.
Instead, Jutge and company have taken two steps backwards by not insisting on match-by-match assessment throughout the 2015 World Cup.