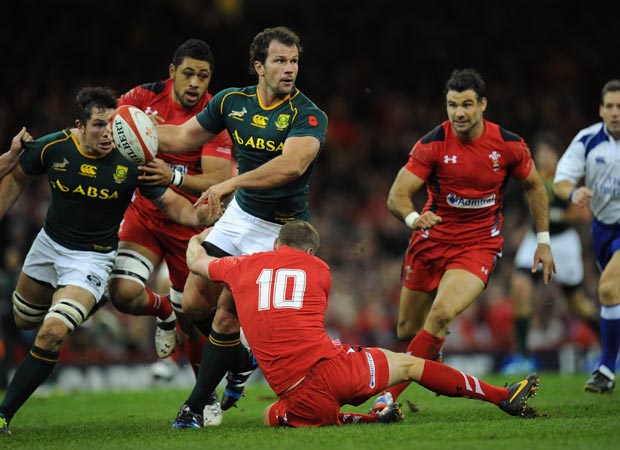 South African rugby is built around mental fortitude, and although I’ve criticised them in the past for being one-dimensional you have to admire their passion and desire. South Africa and Australia and New Zealand are different rugby cultures, just as England and France are.
The South Africans are seen as being all about super-sized aggression, power, strength and physicality, without too many subtle touches – but England have been similar in terms of set-piece orientation, although overall maybe not quite as effective in that area as the Springboks.
Bismarck du Plessis is South Africa incarnate. He’s a wonderful player, and we heard for a long time that the world’s best hooker was sitting on the bench behind former captain John Smit.
He’s lived up to that world’s best tag since he took over, and the pure confrontation he brings to the game is great to see.
What Bismarck du Plessis brings is uncompromising commitment, and dealing with it is a state of mind that not all players – including those at Test level – have in their DNA. He’s a big man (6ft 2ins, 18st), and very athletic, but not a great passer of the ball. However, what marks him out is that he hits as hard without the ball as he does when he’s trying to make yardage with it.
The Springbok hooker takes people out. When he lines you up he’s not just looking to tackle you, he’s trying to cut you in half. The South Africans have that mentality, and so do the New Zealanders because of the Pacific Island and Maori influences in their game – but this England side definitely don’t.
Eben Etzebeth is a phenomenal young athlete who delivers in the same way. Etzebeth is the rugby equivalent of a decathlete because he can do everything, but it is his mindset that worries opponents in the same way that Jon Hall used to in the Bath side that I played for. His opposite number was always thinking, ‘Oh my God, what am I up against?’
Add to that big back row guys like Duane Vermeulen, Willem Alberts and Bath’s François Louw, as well as the experience of the veteran second row partnership of Victor Matfield and Bakkies Botha, and it’s like being in the path of a herd of rhinos when they get their forwards running at you.


However, since Heyneke Meyer took over as coach there is brains as well as brawn. I like the way he’s full of bust-a-blood-vessel expression when he’s watching the Springboks. He shows real passion, but he doesn’t let it affect his decision-making because he gets the right messages onto the pitch.
Meyer has also been sensible in his policy towards overseas-based Springbok players. He’s been prepared to bring players like Louw and Morne Steyn back from Europe because he wants to win – and remember he’s also got quota issues to deal with.
Meyer has stuck with guys like Louw and Matfield because they are intelligent rugby players. Louw’s one-handed offload to put Bryan Habana through for a try against New Zealand last season showed why, while Matfield has been the focal point of the best driving lineout in world rugby.
The Springbok coach knows Matfield’s worth from their time together at the Bulls, and the same is true with his old Bulls half-back combination of Fourie Du Preez and Morne Steyn.
Fly-half sets the tone of the team, and the relationship between him and the coach is critical – it dictates how a team plays. Meyer and Steyn have that connection. They are on the same page, every page, and which Springbok coach would bet against Steyn delivering when it was needed after his crucial kick in the second Test to win the 2009 Lions series for South Africa?
Du Preez is injured at the moment, but what a clever rugby player. He is the glue which links the back-row bangers with the backs, and his kicking game is so good it takes a lot of the pressure off Steyn. Meyer will be aware of the ‘Dad’s Army’ element in his squad, but like any good coach he will also be watching closely the conditioning side for early warning signals if any of the veterans looks unlikely to make it through to the 2015 World Cup.
The good news for Meyer is that South Africa have some serious talent coming through, with their U20 captain Handre Pollard leading the way. He’s more of a running fly-half than Steyn, and with his size he reminds me of Henry Honibal, the Springbok No.10 in the 1997 Lions series.
When they get it right South Africa are an irresistible force, as Wales have discovered. The Welsh pride themselves on being physical, but they cannot match the Springboks. The second Test this summer was a phenomenal game, but you felt that if the Springboks had the Welsh lead in that game then they would have kept it.
They have also found another match-winner in Willie Le Roux. If you kick loosely to the Springbok full-back he is likely to make you pay because of his speed of thought and foot. It makes him dangerous in the same way that Ben Smith is for New Zealand. Players like Le Roux are stars because they produce magic. They are always prepared to have a go, and they have the speed and skill to finish what they start.
The Springboks are a very good side, and this time I expect them to beat New Zealand when they meet in South Africa in the Rugby Championship.
*This article was first published in The Rugby Paper on July 27.