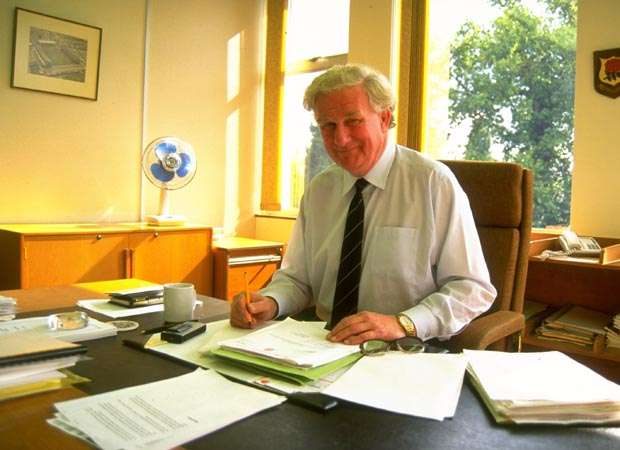 Well, who would have believed it? It may have taken more than 25 years but the main protagonist for a move to professional rugby in England has finally come to agree with the dinosaurs of the past.
As part of an RFU working group looking at the sustainability of expenditure levels in the community game, Brian Moore and the others have concluded what Dudley Wood said would happen 25 years ago was to a degree right.
As reported in TRP last week, Brian and the working party have suggested implementing a gross player payment cap of £150,000 for National One clubs, reducing to £100,000 for National Two and then down to £50,000 for National Three with all player payments stopped from Level 6 down.
Brian, 25 years ago, was the main ‘thorn in the side’ of the RFU and IRB in fighting for the professional game and even met founders of the Kerry Packer cricket circus  with a view to setting up something similar in rugby.
At the time, being part of the group, I was sent to see then RFU secretary, ‘Dinosaur’ Dudley Wood, who, as I have previously written, basically said international rugby could afford professionalism, the club game could not and it would be the ruin of the game if it happened.
I am probably doing Brian a disservice here because I am sure what Brian wanted was payments for those at the top of the game (internationals) and may not have considered the thought that clubs would contemplate turning professional, after all who in their right mind would have?
At the time most clubs didn’t have the infrastructure to support a professional game, with many having ground capacity of a few thousand at most, with perhaps only Leicester, Gloucester and Northampton averaging close to, or over, 10,000 and barely breaking even.
Even now more than 20 years after the dawn of professionalism our Premiership clubs manage between them an average total of around 80,000
(13-14,000 per game) each weekend with a combined capacity of over 199,000 seats (average 16,587 per club).
Despite being relatively close to capacity it should be of concern to the RFU and PRL that most of the clubs are still running at a loss with current champions Saracens running up a deficit of over £30m in the last seven years.
Even those boasting a profit can only do so because of the money extorted from the RFU and the rest of the game for the use of their players.
At grassroots, the number of spectators are not even correlated as there are usually more on the pitch than in the stand (if they have one) but that doesn’t mean they do not have the same ambitions.
I am stating the obvious here, clubs pay players because they want to win their league and be promoted.
Some pay players simply because if they didn’t they couldn’t field a team, particularly if local rivals are paying and taking all ‘the best’ players.
The RFU must have known this could happen when they created the league structure, which is why at the time they said that, along with no ‘glass ceiling’, there would be incremental funding increases as you progressed up the leagues.
Unfortunately, as the clubs below the Premiership know, incremental funding doesn’t exist and those at grassroots are being led up the garden path if they think the RFU are going to start blanket funding Level 8 and below, as Paul Ankcorn of North Tawton RFC intimated in his letter to this paper last week. The RFU will continue to help fund travel and provide loans for improvements etc. But direct funding? Not a chance.
What was interesting in last week’s paper was that we had all levels below the Premiership bemoaning, in one way or another, a lack of RFU funding.
The Championship states a need for £1m per club to remain fully professional or they may be forced to become part-time, wrecking the geographic nature of the league.
The National Leagues are arguing that they will not be able to gain promotion if they are limited to what the RFU working group defines as sustainable wage levels, which if enforced might actually drive investors out of ambitious clubs, causing financial collapse.
The sustainability argument for the National Leagues and below could easily be transposed to the Premiership.
As most, if not all, funding used for paying players in the National League teams doesn’t come from the RFU and is seen as ‘unsustainable,’ I assume it must come from a source outside rugby.
In all likelihood, that source is someone who could walk away, leaving the club with a wage bill they couldn’t pay, which is why it’s unsustainable. However, it could happen to a Premiership club just as easily, as most are reliant on a rich backer to balance the books.
Finally, Mr Ankcorn’s plea to fulfil the promise made at the RFU Expo last November where the RFU management said funding had been from the top down and the new thinking was to fund active clubs at Level 8 and below, is bound to fail – unless RFU sponsors take up the challenge.
What all this should show the RFU and CEO Ian Ritchie is that all is not as well with our game as he has suggested, and a serious rethink is needed if the game as a whole is to survive and prosper.