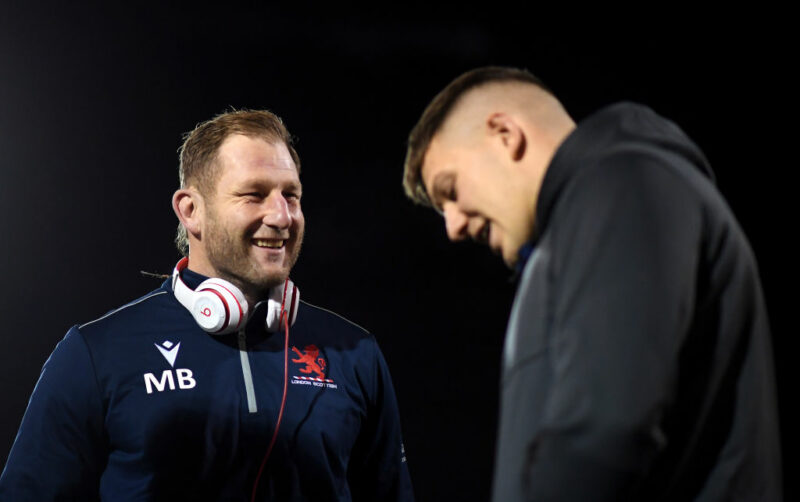 EVERGREEN No.8 Mark Bright has plenty of examples to follow as he prepares to enter the next Championship season with another year under his belt.

English rugby’s second tier has had its fair share of ‘golden oldies’, from Plymouth Albion legend Graham Dawe to the recently retired Ampthill stalwart, Maama Molitika, and the Kiwi-born England 7s star Bright is still going strong at the ripe old age of 41.

Unlike Dawe, whose shorts were up by his armpits by the time he’d retired in his early 50s, Bright’s waistline has yet to creep into middle-aged territory.

“I’m not too bad at the moment,” Bright says about his physical condition. “I’ve probably been training even more since Covid, doing circuits and weights at home, and park runs.

“I want my kids to stay in sport as long as possible. I’m trying to be a good role model for them and show that if you are in a good shape physically and mentally, age is just a number.”

London Scottish’s record Championship appearance maker credits year-round rugby – for Kendal and then Redruth in the UK and Tasman Bay back home – and good fortune with injuries, for his longevity.

He said: “Early on, I did back-to-back seasons for seven or eight years, so I think missing all those mindless pre-seasons probably helped me! And I’ve been pretty lucky with injuries, too, I’ve only had one or two major injuries that require an operation.”

The one-year contract awarded to Bright takes him into an eighth season at the Athletic Ground, and he is hoping to make the most of these twilight years.

“We are supposed to be back for pre-season by September-ish and maybe playing games by December. Fingers crossed that becomes reality,” he says.

“It would’ve have been good to play the last eight or nine games and finish last season properly, but it is what it is. Hopefully, we can get back pretty shortly.”

Bright spent his early working years in the marine industry “crawling around the bottom of fishing boats doing crappy jobs” before the chance to get paid to play rugby materialised.

And the three-time Championship Dream Team No.8 (2013-15) is still enjoying his rugby as much as he did back in his early 20s in Cornwall, and is in no hurry to give up the game just yet.

“I’ve always been told you’re going to be a long time on the sidelines so if you have the opportunity, you should play as long as you can,” he says. “It is a pretty big thing for me to still be able to get a contract offer at the age of 41 going on 42.”

Bright takes a typically chilled Kiwi approach to life after rugby, whenever that  comes. “I am playing it by ear, I’ll go and work on building sites and do a bit of labouring to get some money if I have to, it doesn’t bother me.”

Saracens’ pending presence in the division has also given Bright a new focus: “I can’t wait to have a crack at them!”