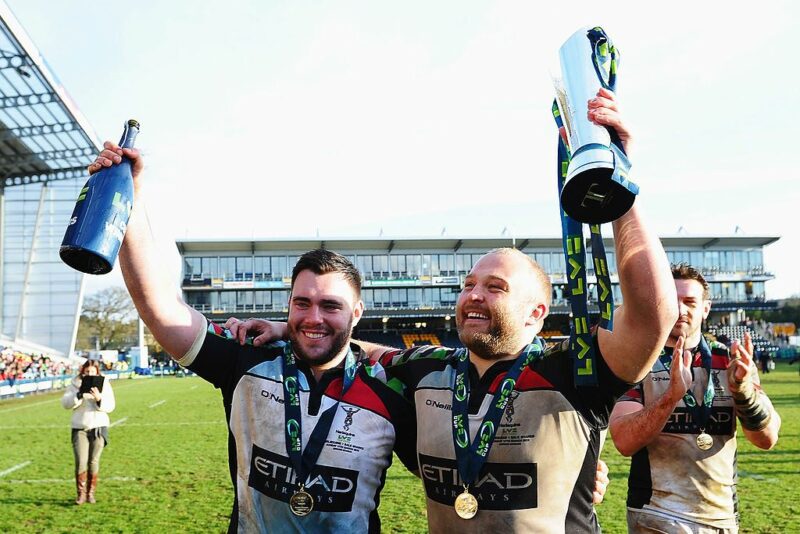 Mark Lambert has finished his career as a one-club man after announcing his immediate retirement at Harlequins.

The prop has called time on 17 years as a professional rugby player and will continue in his role as chairman of the RPA and ambassador for the Harlequins Foundation.

Lambert, 35, made is 250th appearance earlier this year for the club in the dramatic victory over Exeter Chiefs at the Stoop.

The veteran was present during all three of Harlequins’ silverware-lifting campaigns of the past decade, named in the matchday squad which beat Leicester Tigers 30-23 in the 2011-2012 final to claim a maiden Premiership title.

This triumph was preceded by the Amlin Challenge Cup win over Stade Francais in 2011, and followed by LV Cup in 2013 after beating Sale Sharks.

On confirmation of his retirement from rugby, Lambert said: “I played my first game in a Quins shirt in 2002. I’ve had a picture of that moment on my wall for years. I have never been more nervous in my life than I was before my starting debut against Gloucester in 2004. I have never felt worse in my life than the day I was told my career was over in 2005. That is what playing for this club has meant to me.

“I have been on borrowed time in the game since I was 20. I have made it to 35. What facing retirement at a young age gave me was an appreciation that this had to end one day. As a result, I have done my best to make the most of the experiences that have come my way.

“I’ve worn the shirt hundreds of times and every time, even the games on a Monday night that I didn’t want to play, when I pulled it on I looked at the badge and realised it was a privilege.

“I want to thank the supporters of Quins. You have always been passionate, kind, and friendly to me. I hope I have been the same in return. I want to thank my friends and family for all your love and support. My wonderful wife, children, sister, and aunt of course, but mainly my mum and dad. You have been on every step of this journey with me and I will forever be grateful for that.

“Finally, I want to thank my teammates over the years. They are the reason I’ve played for so long. I have a lifetime of memories on and off the field.

“There is something incredibly special about the shared experiences rugby gives you. It’s nice to win, but really, it’s all about those shared moments. Cherish that and the results will come. I have been living that for 17 years. I am a lucky man but I am really going to miss it.

“If anyone wants a reminisce come and find me at the bar. Thanks, everyone.”

Lambert was capped by England at U19 and U21 level before going on to play for the England Saxons side during the 2009 Churchill Cup.

Harlequins head of rugby Paul Gustard said: “On behalf of all the support staff at the Club we would all like to thank Lamby for his immense contribution to the Quarters over the last 17 years. He has been a true club man who has given his all on and off the field. His presence will leave a hole in the group that will leave not only an emotional space to be filled, but also quite a sizeable physical one! I am delighted he managed to get to that magical 250 appearances, which puts him in a group of very special players at this great club.

“For such a big man he had a big engine and probably an underrated ball-playing ability. He was a bright and articulate player who understood the game innately and contributed to debate and discussion on any aspect of the game, not solely his specialist area up front.

“I think he can rightly look back on his career with great fondness and memories and be proud of what he achieved.

“I would like to thank Lamby and wish his ever-increasing family the very best in the future. We look forward to welcoming him back to The Stoop in a more social capacity. Good luck, big man!”