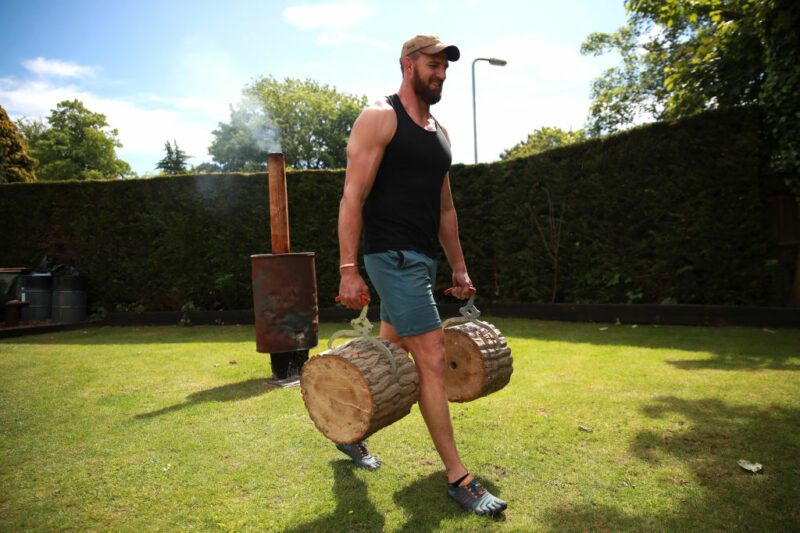 Tom Wood is proving why he’s one of the sharpest tools in the box by using rugby’s lockdown to carve out a new career in woodwork.

The 33-year-old former England ace has been honing long-standing carpentry skills, with his eyes firmly focussed on chiselling an alternative way to make a living once the drive to chop opponents in half fades.

Woodbyname is the moniker of his company and mightily impressive is his growing body of work.

Northampton back rower Wood told The Rugby Paper: “I was always interested in woodworking and my mum  tells the story of my granddad giving me money for sweets, but the shop was next to a hardware store and I came home with a load of nails instead!

“I didn’t make anything sophisticated back then, but it showed my intent from an early age and I went on to do design and technology at school.

“It was the early days of computer aided design and I wish I’d put a bit more time into that, but I was more interested in the hands-on stuff before rugby took over my life at Worcester, then Saints, and I lost sight of woodworking in my twenties.

“But in 2014 I moved house and picked things up again. Having a workshop helped and as I got a bit older, I started to appreciate time away from rugby in order to preserve my energy and enthusiasm for it, so the woodworking started to take off.

“Given the gear I’ve accumulated and the experience I’ve gained, I definitely see it as a long-term career prospect now. Toolstation sponsor Saints and they’ve been really helpful along with other companies, so I’d be stupid not to do it.”

With teammate Alex Waller as a business partner, Wood added: “I share a lot of interests with Alex and it’s working very well. I’ve done a few paid commissions already and on the back of that I’m starting to get orders for new things.

“We haven’t got a website yet but there are photos of my work on my ‘@woodbyname’ Instagram page and people seem to take inspiration from that.

“I don’t know if it’s going to be enough to pay the bills long-term, but it feels like it’s gaining momentum for when rugby is no longer my No.1 focus. I’m more of a doer and coaching doesn’t appeal – I’d actually find that torture.”

Wood intends keeping the hammer down at Saints for a while yet, though, as he explains: “I’m contracted for next season but who knows what this little sabbatical might do for me?

“It might put a bit more juice in the tank and whereas I might have had only one more year, I might get another two or three now. The mind and body are certainly willing so we’ll get to Christmas and see what Saints’ plans are from there.”

Meanwhile, Wood is relishing his role as a senior player in Saints’ revival.

He said: “I’m at the other end of the age spectrum to when I joined in 2010 but from a club standpoint there’s loads of energy, youth and optimism around the place and we’ve shed a lot of baggage from the end of Jim Mallinder’s tenure.

“Saints had an amazing ten years under Jim in which we were successful and there’s so much good stuff to be said about it, but we really did grind to a halt and there was a lot of unrest within the fanbase and the squad.

“We weren’t functioning the way we could have been and while we still had great quality and brilliant individuals, things weren’t coming together.

“But the fact we freshened it up and brought a load of new coaches and youth in has revitalised the place. Phil Dowson, Matt Ferguson and Sam Vesty have brought a huge amount of intent and I’m really glad to have stayed part of it.”

With a raft of new England prospects coming through, Wood added: “It’s brilliant to see boys putting their hands up internationally.

“I don’t have any official role as a captain or anything, but as a senior player there is an opportunity to lead and mentor where appropriate.

“To be honest, though, there’s no need for somebody to be driving standards especially hard because those young lads do it themselves. If anything, their energy rubs off on me.”