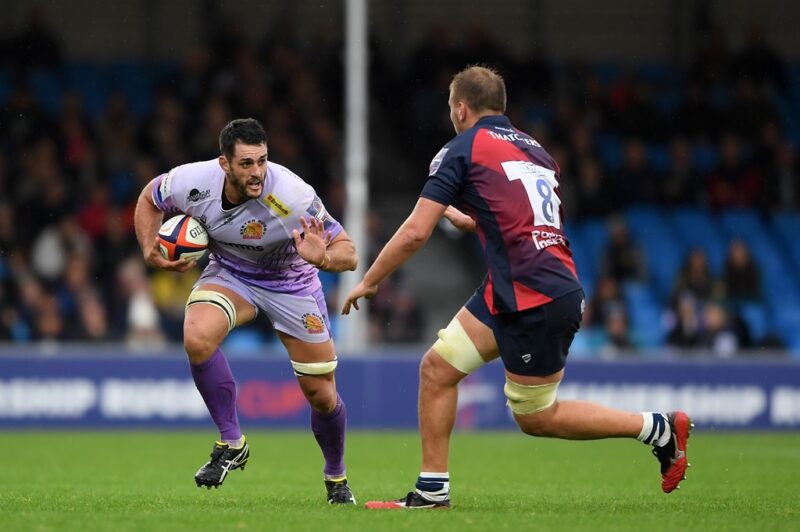 Exeter star Dave Dennis has outlined his ambition to help Australian Rugby Union regain its pre-eminence in the world game.

Concerned former Wallabies point to neglect of the grassroots game – a feeling shared by 18-cap back rower Dennis as he approaches the final year of his contract at Chiefs.

Dennis, 34, told The Rugby Paper: “You’re obviously concerned. I’ve kept a close eye on things since being over here and while I’ve enjoyed my time at Chiefs, ultimately my heart lies in Australian rugby and part of me wants to get back there and help.

“A lot of players have that desire and, as a former Wallaby myself, you just want to see the game prosper and be back to the golden years of the Nineties and mid-Noughties.

“There are so many good people involved in Australian rugby at volunteer level, but a common opinion is that the grassroots have been neglected over the last 10-15 years.

“For example, I grew up in western Sydney and played for the Penrith Emus, but they pulled out of the Shute Shield two years ago and kids are having to travel to Sydney to attend academies, which is like driving from Cornwall through to Gloucester.

“That’s not going to produce lots of talent so if we could develop programmes locally that encourage kids to stay and then grow from there, the whole game would be better for it and that’s something I’m very keen to get involved in.”

Dennis added: “Rugby League is obviously big but there are still lots of people who enjoy Union and there’s a huge Pacific Island population, so there’s a great opportunity. If we can get the infrastructure in place, we can definitely rebuild Australian rugby.

“From a business perspective, the ARU’s in a deep hole at the moment, but I remain optimistic and maybe this is a reset we need.

“It’ll take time but maybe in five or ten years you’ll see growth through the grassroots and another strong core group of players in Australia, which in turn will lead to us having a strong national side that can really start competing at World Cups again.”

Dennis said: “Logistically, financially and product-wise, that would be a really good option.

“There needs to be a team in the Pacific in terms of their growth and maybe you could keep an Asian team in Japan or elsewhere within a similar time zone.

“South Africa is a proud rugby nation so there are questions around where they would play. Do they go up north, or do they develop their own league?

“It’s an opportunity to make some really good decisions around SANZAAR for the betterment of the game and I just want to see rugby prosper in Australia. I love it and if I can play a part in future, I’d relish that opportunity.”