Remembering Exeter Chiefs’ promotion to the Premiership ten years on 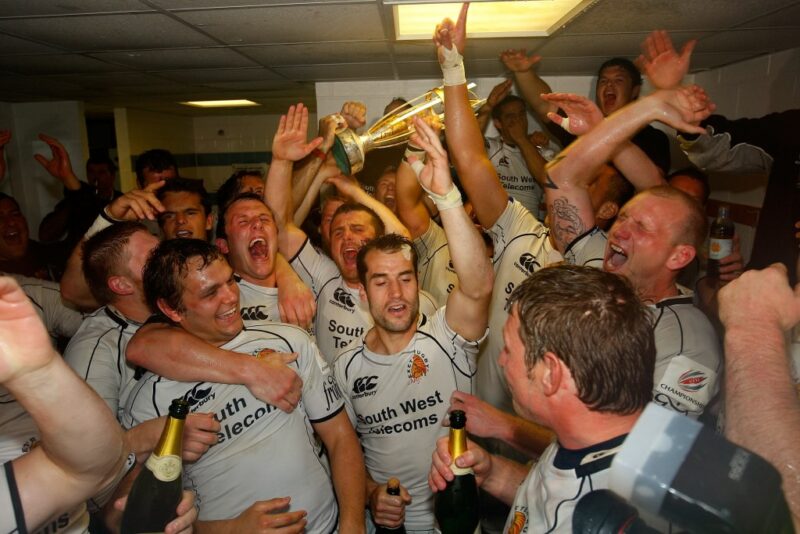 Today (Tuesday), Exeter Chiefs celebrate the tenth anniversary of winning promotion to the Premiership. NEALE HARVEY marks that momentous day by talking to two of the main personalities

Exeter supremo Rob Baxter believes the same bloody-minded resilience that underpinned his side’s charge into the Premiership ten years ago will continue to fire their ambition.

On May 26, precisely a decade will have elapsed since Exeter triumphed at a rain-soaked Memorial Stadium to achieve their dream of a place in the big time after beating Bristol 29-10.

On the back of a 9-6 win in the first leg at Sandy Park, 24 points from the boot of now legendary fly-half Gareth Steenson and a late try from hooker Simon Alcott, whose career was sadly cut short by a neck injury three years later, proved more than enough for a 38-16 aggregate win.

While crestfallen Bristol would slide into a rapid decline that almost resulted in bankruptcy before they were rescued by billionaire Steve Lansdown, victory laid the platform for Exeter to make good on the potential that had seen them open their new stadium in 2006.

Ten years after masterminding promotion, Baxter is still at the helm, as is his right-hand man, Ali Hepher, and he is happy to expound on the reasons for their success.

“The important thing is having confidence in knowing what’s important, and some things have never changed,” Baxter told The Rugby Paper.

“We’ve never been afraid to experiment with how we play and we obviously look at how we improve and add to our squad.

“Nor are we afraid to look at opposition teams and take bits that have allowed them to be dominant in the Premiership or Europe, so we’ve proved we can adapt.

“But, overall, we stay true to ourselves and the thing that has probably allowed us to keep progressing has been resilience, because other teams maybe haven’t had that in abundance.”

By resilience, Baxter implies Exeter’s route to the top was far from plain-sailing. There was heartache along the way, not least a number of second and third place finishes between being promoted to the second tier in 1997 and making the final step, plus numerous cup final failures.

Baxter explains: “The thing I find the funniest, and at the same time the most frustrating, is when people still talk about us just arriving on the scene. For those of us who were there, we certainly didn’t just arrive, it felt like bloody hard work and we had to go through a lot and be patient.

“I played and captained Exeter when we went from the fourth tier to the second tier two years running in 1996 and 1997 and got to within touching distance of the top-flight, but we spent a lot of time in the old first division and the overriding message you’ll get from people who’ve been involved in this club for a long time is that although ambitions changed, it’s NOT been a meteoric rise.

“We got there or thereabouts in the league many times without succeeding. We got to the final of the tier two cup competition four times but lost the lot.

“But while other clubs briefly shone before falling away, we never got dented by failure and it’s that resilience that’s shown through.

“As big as beating Bristol was – and it was a very special moment – in reality it was only the next step of a journey that had taken years. It’s the same attitude that underpins us now.”

Irish lock Tommy Hayes led Exeter into battle at the Memorial Stadium. Here’s his take on that momentous night for the Chiefs.

“I remember the atmosphere surrounding those play-off games as much as anything.

“It was my second season at Exeter and having slipped up the previous season, we knew we had to get down to business. It was a shoot-out to get into the Premiership and that brought its own tension, but you can either let that intimidate you or you can embrace it – and we chose the latter.

“The big driver for us, and what I tried to impose on the lads, was what it meant to the club. I was trying to tap into the club’s history as much as possible and use that as a positive.

“Exeter had started to be considered as always the bridesmaids because in the few years leading up to that 2009/10 season we’d been a top two team without being able to overcome the Premiership club-in-waiting, whether it be Harlequins, Northampton or Leeds.

“Exeter had always been up there but never got over the line, but this time we felt we had a good new group and we didn’t saddle ourselves with the shortcomings of previous seasons, although I still wanted us to tap into the 139-year history of where Exeter had come from.

“Tony Rowe, our chairman, had a lock-up near the old County Ground and I found all these old photos in there.

“I said, ‘Right, these shouldn’t be left down here, the boys need to see this long history,’ so we put the pictures up at Sandy Park and that helped bring the whole lot together. We knew we were on the brink of taking that next step and that gave us brilliant inspiration.

“There’d been nothing between ourselves and Bristol during the regular season and we won the first leg of the final 9-6, but going into that second game we were as confident as we could be. Pressure was mentioned, but pressure’s what you make of it and we wanted to perform.

“The plan came together, Steeno kicked his goals and it was a brilliant achievement by a special group of fellas I was proud to lead, and who continued to grow as a group in the Premiership.

“Nobody was sure Exeter could win a Premiership, but we always knew there was big growth in the club.

“The only disappointment for me was having to step away through injury three years later and miss out on a few things, but while I was in the thick of it, it was hugely enjoyable.

“Ten years on, Rob Baxter and Ali Hepher are still there leading a brilliant coaching set-up and Tony will want to hold on to them for as long as he possibly can. They’re constantly talking about improvement so they’ll keep the players invigorated and achieve more success.”