By Peter Jackson
And so England are as far away as ever from getting on-side with the scrum-half they lost after one match 35 years ago.
At Bristol in the spring of 1983, the RFU picked a 16-year-old League scrum-half from Wigan to captain their Union schoolboy team against the all-conquering Welsh, a move seen by many as a valiant but hopeless attempt to dissuade the boy from a career in Rugby League.
He rose to the occasion by leading England to a fortuitous win that denied the superior Welsh a junior grand slam. As the ultimate irony, he would reverse the process in the fullness of time, most famously in 2013 when Stuart Lancaster’s England went to Cardiff on the final stage of a Grand Slam only to disintegrate.
In defence of the RFU, they never had a prayer of prising Shaun Edwards from his natural habitat. Union was amateur, League professional and Wigan had agreed a deal to sign the prodigious local boy the minute he turned 17. The package amounted to £35,000.
“It was £10,000 straight away and £5,000-a-year for four years,’’ he told me. “The rest was for bonuses to play for Great Britain and go on a GB tour.   When we won a match, we were also paid £150 which I thought was great.
“I gave the first ten grand to my dad and he invested almost all of it. I bought a VHS recorder and a new television. I might have bought my mum a washing machine. It was my way of thanking my parents for what they’d done for me.’’
Soon his golden career will turn full circle and Edwards will be back in the Rugby League town that gave him the gravel in his gut, enough to drive him through the victorious 1990 Challenge Cup final against Warrington despite   fracturing an eye-socket and cheekbone in the ninth minute.
Edwards’ choice to rejoin Wigan as head coach after next year’s World Cup means that a fourth decade will have come and gone without Twickenham joining forces with a coach who has won everything there is to win in Union bar the World Cup.
Their mutual exclusion cannot be described as a separation for the simple fact that they have never been together.  More than ten years have passed since the RFU under Rob Andrew, then their director of rugby, made what seemed a half-hearted attempt to keep Edwards in the fold.
They offered him the part-time job of running the second-string Saxons, a kneejerk reaction to Warren Gatland, the newly-appointed Wales coach, moving to reunite his Wasps partnership on the Test stage by borrowing Edwards from the London club on a part-time basis.
The man himself had decided to go with Wales but only with the blessing of a Wasps dressing-room then laden with World Cup-winners like Lawrence Dallaglio, Josh Lewsey, Simon Shaw and Phil Vickery.
“I had a meeting with the Wasps’ players,’’ Edwards said. “Vicks’ said to me: ‘How much have England offered you to run the Saxons?’
“I told him: ‘Ten grand’.
“And I told him how much Wales had offered me and every one of them gave me their blessing to go. I probably wouldn’t have gone otherwise. That year we won the Grand Slam and ‘Shawsy’ said to me: ‘I knew I should have said ‘no’ to you joining Wales’.” 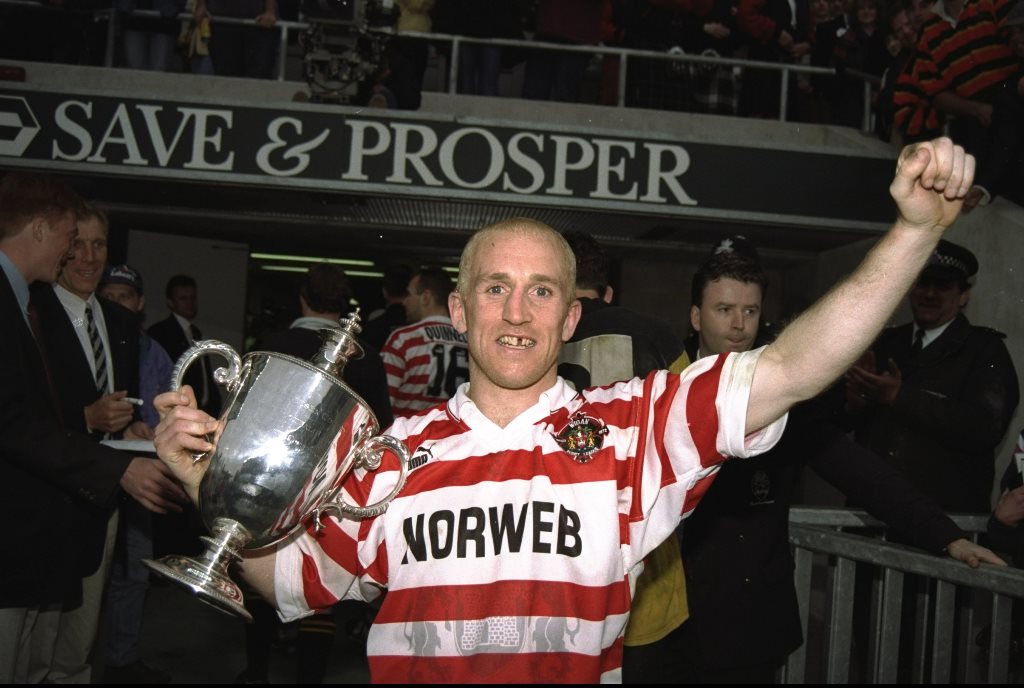 England made their next attempt to get Edwards on board three years later before their World Cup misadventure under Martin Johnson in 2011. From a Red Rose perspective the meeting with Johnson turned out to be as abortive as the first approach.
“He didn’t really offer me anything,’’ Edwards said. “He just asked me where I was. I told him I’d shaken hands with Wales on a deal and we just had a chat about the game. I did think at the time that one day I might work with ‘Johnno’.”
Edwards has won so many laurels in both codes that he could spend the remainder of his days resting on them and still leave many untouched. On the rare occasions that he does look back, one Six Nations record will give him particular satisfaction as the architect of Wales’ defensive strategy.
Of all the tournament’s Grand Slam teams, nobody has equalled the Welsh record of conceding the fewest tries from the five matches, two in 2008, one to England fly-half Toby Flood, the other to the Italian tighthead Martin Castrogiovanni. ‘Nilling’ the opposition, as in keeping a clean try sheet, has long been one of Edwards’ favourite words.
Even England’s World Cup-winning squad of 2003 leaked twice as many, including three in the first game, against the France of Olivier Magne, Clement Poitrenaud and Damien Traille. Ireland under Declan Kidney in 2009 came closest to matching Wales of the previous year, conceding three tries en route to their historic achievement in Cardiff.
For all the time he has spent living in London and working in Wales, Edwards will forever be a Wiganer at heart, blue-collar and mighty proud of it.  “I’m a great believer that you are a product of your environment,’’ he said. “Wigan is a place that breathes a competitive edge into you.’’
Edwards has been seriously competitive since starting his rugby life at the age of seven, three years after his father, Jack, a League scrum-half in his own right, had to finish at 24 because of spinal damage. His ‘vivid memory for matches’ includes one for his under-eleven school team.
“My father was a very positive influence and my mother was a driving force as well,’’ he says with a chuckle. “She’s a little firecracker with a heart of gold.  I vividly remember one game which wasn’t going well and my mother let me know in no uncertain terms.
“For her to be shouting at me meant I must have been playing really badly but it turned out to be what I needed that particular day. I went on to score four tries.’’
Wales will be thankful to have him for one more Six Nations and one more World Cup.