Posted on 23rd September 2015 by Nick Verdier in Latest News 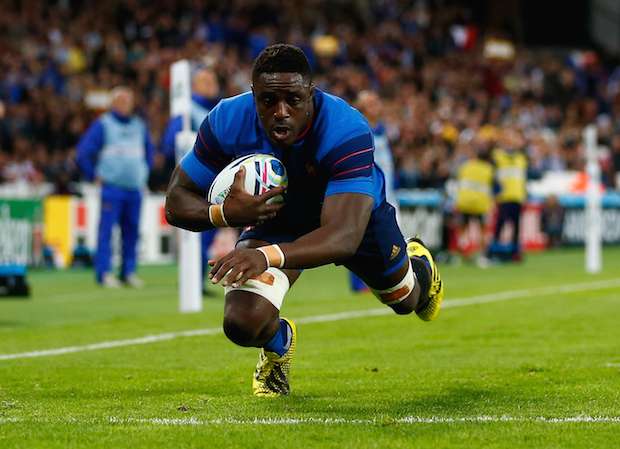 Two tries from Sofiane Guitoune helped France recorded their second win of the World Cup as they beat a plucky Romania 38-11 at the Olympic Park tonight.

Les Bleus, who beat Italy in their first game, scored five tries in total but, despite what the scoreline might suggest, they struggled to get a stronghold on the game for the first half-hour as a yellow card to Romania tighthead Paulica Ion changed the game.

Guitoune, who started on the right wing in place of the injured Yoann Huget, and Yannick Nyanga went over within two minutes of the yellow card to take a 17-6 lead at the break while Guitoune’s second and one from Wesley Fofana and Gael Fickou sealed the win and the try bonus-point in the second half.

Morgan Parra put France in front seven minutes in with a penalty but it was the Oaks who had the better start putting the French under huge amount of pressure forcing many turnovers.

Florin Vlaicu deservedly levelled the score with a penalty but a strong driving maul from France turned their fortunes around with ten minutes left in the first half.

As the French forwards were marching towards the line, former London Irish and London Welsh prop Ion collapsed the maul and was shown a yellow card by referee Jaco Peyper.

France made them pay from the next action with Guitoune beating his opposite man to score in the right corner and open a 10-3 lead.

Two minutes later, a long range move, initiated by Brice Dulin in his own half, was concluded by Nyanga in the same corner and all of a sudden France had a 17-3 lead although Vlaicu reduced the gap with a penalty on stroke of half-time.

Despite a spirited half-time speech by head coach Philippe Saint-Andre, the first 25 minutes of the second half saw France unable to construct more than a handful of phases together and frustration grew.

But again, two tries in two minutes put the game to bed as well as securing the try bonus-point.

Romania were rewarded for their efforts with Valentin Ursache barging his way over from a clever lineout move but France had the last word with Fickou scoring one minute from time.