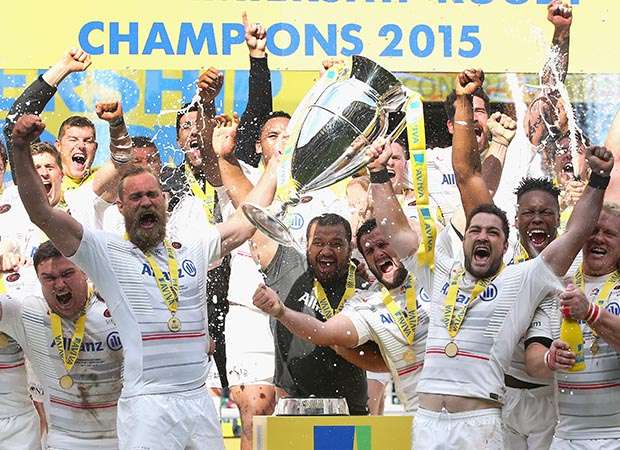 By NEIL FISSLER
Premier Rugby will this week officially brush their nine-month salary cap investigation under the carpet and refuse to take any action against Bath and Saracens.
Both clubs have been under investigation since last Dec-ember for breaching the cap, which has been raised to £5.5m for the forthcoming season.
A report into the investigation was due to be presented to clubs last season. However it was then postponed until June – when it was pushed back even further.
It will finally get discussed when Premier Rugby stakeholders get together for their annual pre-season meeting this Wednesday.
But for action to be taken against both clubs it would need a 100 per cent agreement from the stakeholders.
That won’t happen, however, with a well-placed source revealing to The Rugby Paper some of the deals that have been going on behind the scenes to gain support.
They include one club demanding that another drop any interest they have in signing one of their star names, who is out of contract next summer; while a cartel of clubs are threatening to block any other commercial deals as well as plans to ring fence promotion and relegation unless they get their way.
And now that some clubs have been brought to heel an announcement they are enlarging the Premiership could be made after the very same meeting.
The level of sanctions available for salary cap breeches range from four points for a minor breach to 40 points for a breach in excess of £250,000.
I understand, however, that if this is invoked it would be immediately challenged in the courts in a bid to get it overturned. It is understood a complaint would also be lodged with the European Union as the Salary Cap could be a restriction on fair trade.
One owner may also try and increase the cap by around £1million a season to bring it closer to the big spending French clubs.
The decision is likely to spark a backlash from fans who have been demanding action is taken against clubs in breach of the salary cap.
A source said: “Premier Rugby is run by a small cartel of clubs and the other clubs are being blackmailed and bullied into not voting against them. The whole thing stinks.
“ They will get let off because clubs don’t want the bad publicity in case it upsets the sponsors and broadcasters. Some of these clubs are run by very successful men who are used to getting their own way and this isn’t any different.
“It is no wonder that the club game in this country never moves forward.
“It’s a closed shop with a  few clubs making the decisions.”