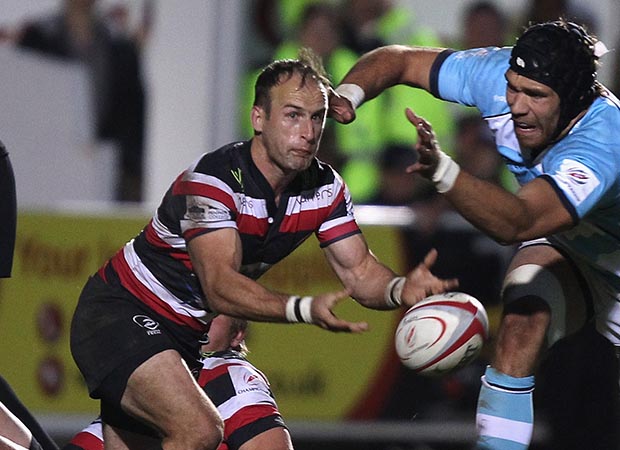 I always thought of myself as more of a game manager rather than a game changer, feeding off the good work of others around me and getting the best out of them. As such, my team-mates need to take a lot of credit for everything that I went on to achieve in my rugby career.

I was fortunate to get to lift two trophies, compete in two Championship finals and face down the Haka as captain of the Championship Select XV, and that’s without taking into consideration the fact that I played with some great players many of whom I regard as lifelong friends.

Things weren’t all plain-sailing, though. After leaving Wales to study sports science at the University of Wolverhampton, I spent a year out of the game, and at one point it looked as though it might be for good after injuring one of the vertebrae in my back. However, after a while, I was able to play touch rugby and do some of the practical elements of my degree course without any discomfort and eventually I got the all-clear to play full contact rugby again.

I then caught the eye of Birmingham & Solihull during a brief spell at Worcester academy and got my first taste of proper men’s rugby at the age of 19. The Bees had just won promotion to the old National One, now the Championship, and I thoroughly enjoyed the cut-and-thrust of the League.

Next stop was Orrell, and my first full-time contract. The season before Orrell had beaten Exeter in the Powergen Shield final at Twickenham and had assembled a really good squad. We finished second to Worcester but Dave Whelan withdrew his financial support and we were all left looking for other jobs.

Thankfully, Rotherham came to the rescue – for all of two months. I was beginning to feel cursed after being made redundant for the second time in a matter of months when the owners pulled the plug a day or so before a pre-season friendly against Ulster. With it being so late in the day, there weren’t that many options around. But I was fortunate to sort myself out with a contract at Cornish Pirates, as did assistant coach Jim McKay, who’d also experienced the Orrell and Rotherham debacle.

Coming from Bridgend, where I played mini and junior rugby at Pencoed RFC, I knew what it was like to be in a real rugby hotbed, but the passion the Cornish public had for the sport still took me aback. It really hit home to me when we beat Exeter in the EDF Energy Trophy and returned home to a wonderful reception. At first, I thought booking an open-top bus was a bit of overkill on the club’s part but I soon changed my mind when I saw the packed streets.

All things considered, that 2006/07 season was probably the most enjoyable of my whole career.

I’d been with the club a few years by then and the squad had gelled nicely with players of a similar age coming to the peak of their powers at the same time. With Dicky Evans at the helm, it felt like we were making progress year-on-year, either in terms of where we finished in the league or in recruitment.

It was a great time for rugby in the South-West. The derbies against Exeter and Plymouth were unforgettable occasions especially around Christmas time when you could get bumper crowds of around 5,000. The on-pitch rivalry was a bit like when the English play the Welsh: nothing else seemed to matter other than getting one over on each other.

Leaving the Pirates to return home to Wales with Llanelli Scarlets was a difficult decision to make, but one I felt I had to do at the time if I wanted to push on with my career. Sadly, things did not work out as planned.

World Cup call-ups meant we had an unsettled squad in my first season, and overall the highlights were few and far between. Contributing to a good win over the Ospreys at the Liberty Stadium is one that stands out in my memory.

The Pirates hadn’t had the best of times during the two seasons I’d been away and the club had failed to move any closer to resolving their ground issues, so my decision to return for a second spell wasn’t entirely straightforward. But my wife’s Cornish and, taking the long-term view, we thought it was probably best to go back.

Obviously, looking back, that was the right decision. Chris Stirling created a really good environment with Ian Davies and Harvey Biljon working under him. Although I’d skippered the side before I left, I came back much more experienced which was a big help considering the age-profile of the squad was a lot lower than first time around. The younger guys probably helped prolong my career and I went on to make over 200 appearances for the club.

The defeat to London Welsh in the Championship final was far tougher to take than the Worcester game where we were rank outsiders. Unfortunately, we’d picked up injuries to key players in the semis and just ran out of steam.

The transition to coaching came a little sooner than I expected but  Alan Paver and I had a really good tutor in Ian and the structures that he put in place before leaving for a career in teaching meant we had some solid foundations to build on. So far, touch wood, things have gone well.

*As told to Jon Newcombe