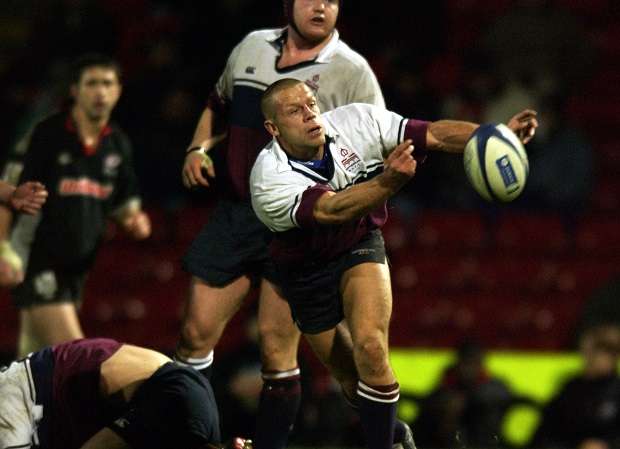 Winning the Sevens World Cup in 1993 was the highlight of my career and my try-saving tackle on Fiji’s Mesake Rasari in the semi-final was voted the tournament’s most memorable moment. Ironically, I couldn’t remember a thing about it because I got hit in the side of the head by Rasari’s knee brace and was out cold. I didn’t realise until the post-tournament dinner that we turned the ball over from my tackle and went up the other end and scored.
I was fairly well-known on the 7s circuit because I was playing in a decent Wakefield side that included England wing Jon Sleightholme. I was also very fit – I twice ran the London Marathon the day after a game of 15s.
When I first started out with England 7s we were not world-beaters by any stretch. But, as the World Cup approached, we started to take it more seriously under the management of Les Cusworth and Peter Rossborough.
We had some gems in Lawrence Dallaglio, Tim Rodber, Adedayo Adebayo and Andy Harriman, the fastest man in the tournament, and gelled together as a team. On finals day we beat New Zealand, South Africa, Fiji and then gained revenge for an earlier loss against Australia in the final.
I don’t think anyone can say we didn’t deserve to win having beaten such high-class opposition. The Australian team included David Campese, Nick Farr-Jones, Willie Ofahengaue and Michael Lynagh but we raced into a 21-0 lead before they staged a comeback and it was a massive relief when the final whistle went.
All my club rugby was played in Yorkshire, with Wakefield, Rotherham, Otley and Doncaster in the National Leagues and then at Wheatley Hills, who I played for until I was 47. Luckily I was able to combine the rugby with my day job as a fire-fighter. I’ve only had four days off sick in 23 years: two for a broken hand and two because I couldn’t walk.
Becoming the first player to reach 350 National League appearances in 2006 was a proud moment, and I’m also in a select band of players in the ‘100 try club’.
My one and only Premiership season came with Rotherham in the 2000/01 season. I actually started in the backrow against Wasps when they had Joe Worsley, Paul Volley and Lawrence in their side, but had to move to stand-off when Simon Binns went off injured.
From a results point of view the season was a disappointment but the overall experience was good at Rotherham because it still felt like a proper rugby club even though professionalism had come in. The legend that is John Dudley used to have a bacon sandwich and a fag before a game! We still beat Perpignan in Perpignan and not many sides can say that.
Binnsy and I enjoyed a good partnership at Rotherham and then at Otley. He was a very good player who should have got a lot further in the game. We punched well above our weight to finish in the top four in the old National One.
Playing under Clive Griffiths at Doncaster was really good too. His knowledge and attention to detail are superb and he is a very good motivational speaker. It was also great to be reunited with my old Rotherham team-mate, Glen Kenworthy. He was a fantastic player who, like Binnsy, never got the plaudits he deserved.
I quit playing professionally when I had a bit of a fall-out with Clive’s successor, Lynn Howells. I was 45 at the time and decided the time was right to get into coaching and I moved back to Wheatley Hills RUFC where it all started for me back in ‘80. I’m still playing some Vets rugby though. What else would I be doing on a Saturday afternoon?
*As told to Jon Newcombe