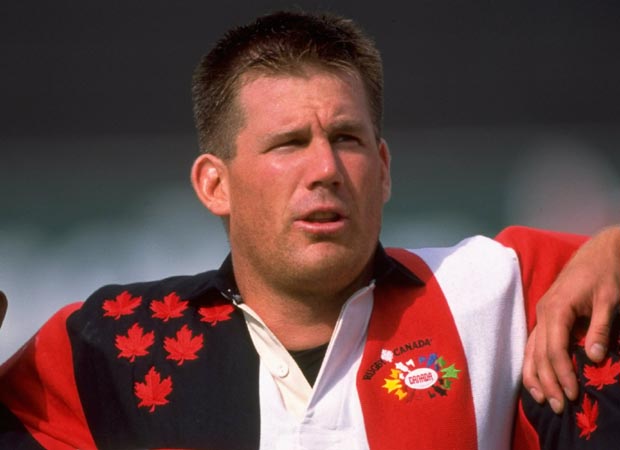 Some people may find it hard to believe now but Rotherham once went to the Stade Aime Giral and beat Perpignan in their own backyard.
We won 20-19 in the 2000/01 European Shield – a time when English clubs rarely won on French soil. It was a massive win for us, as we were bottom of the Premier-ship and nobody gave us a chance.
I rounded Thierry Lacroix in the second half to score under the posts after being set up by Dave Scully. Dave was a phenomenal athlete. I remember him once playing a full 80 minutes for us against London Welsh on a Saturday and then running the London Marathon in under three hours next day.
Rotherham was full of fantastic players who forged a great team spirit despite a real mixture of highs and lows during my time there. I joined the club in 1997 and went on to play in over 150 games, as well as coaching the side during our second spell in the Premiership. I was a capped Canadian international, but still an amateur, when I decided to uproot and move to England.
Seventeen years later I’m still here and have an English wife and two kids. I’ve probably got the legend that is Gareth Rees to thank for putting me in the shop window because he set me up for two tries against Wales in Toronto, which caught the eye of agents in the UK. Not long after I got a phone call to ask if I’d be interested in signing for Rotherham.
Needless to say I knew very little about Rotherham when I first came over. Luckily I didn’t pay too much attention to a couple of tourist comments I saw on a visitor website which basically said they couldn’t wait to leave. Okay, it wasn’t surrounded by mountains and water like in Vancouver but I was quickly made to feel very much at home by the owner Mike Yarlett, the players and the brilliant fans.
We had some great battles with the ‘rich southern boys’ Worcester and it was us who normally came out on top. Getting promotion via the play-off double header with Bedford was amazing. The club and the players had got to where we wanted to be and I think we went on to give a pretty good account of ourselves.
It was great welcoming the likes of Leicester, Martin Johnson, Neil Back et al, to Clifton Lane. Ultimately we were four or five players short of being consistently competitive.
We earned the right to go up the next year but were denied by the powers-that-be. To this day I still haven’t heard a proper explanation. But we won National One again the following year and it was a great achievement to bounce straight back up.
The owner understandably kept his powder dry on the recruitment front until promotion was ratified, and we were left playing catch up in the 2003/04 season. By that stage the other clubs had two years of top-flight experience behind them and we were behind the eight-ball in so many respects.
I remember Harlequins turning up with 18 support staff and thinking this is going to be tough. Mike Umaga and I did as best we could but by December we were still without a win and the club decided to bring in Steph Nel above us. The first we knew of it was when he turned up at the club. Steph was a passionate guy and I learnt a few things off him and Alan Zondagh, who he brought over with him, but both found the Premiership a tough environment and our fortunes did not really improve.
Following relegation we recruited well and brought in Ross Reynolds and Jim McKay as coaches. But by the middle of August the owner had had enough, and after another fallout with the RFU, he pulled the plug.
Thankfully, with the support of a local businessmen and the council the club survived and I was reinstalled as player-coach. The first game of the new era against Sedgley Park was an emotional one, which I capped with a try and a Chris Ashton-style belly flop celebration.
By January I was sacked, which was bitterly disappointing. I’d helped keep a core squad of players intact and that was the thanks I got. It’s all water under the bridge now though and thankfully it wasn’t long before John Inverdale invited me to Esher where I have been ever since as both rugby director and CEO.
-as told to Jon Newcombe