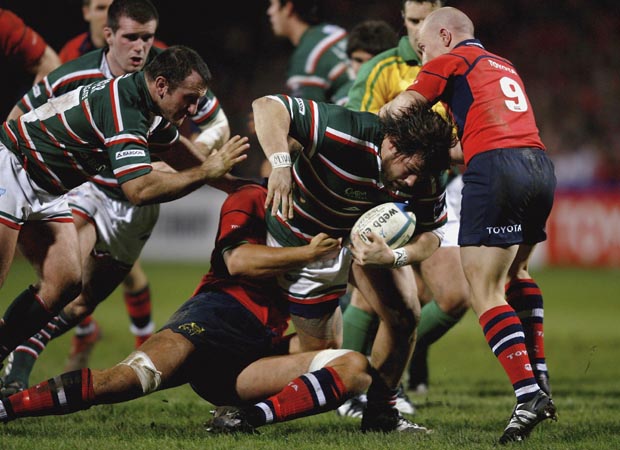 It was deemed the impossible task. Nobody had ever beaten Munster in a Heineken Cup tie at their Thomond Park fortress – a run that stretched back 26 matches over 12 seasons. The Irish province were the reigning European Champions, having ended their long quest for success against Biarritz the previous May, and having already defeated Leicester 21-19 at Welford Road in the opening match of the campaign, victory number 27 would surely be a formality. But the men of Munster found themselves on the wrong end of one of the great Leicester efforts of all time.
The earlier home defeat had proved very hard to take, coming as it did through Ronan O’Gara’s last gasp penalty kick from halfway. Tigers skipper Martin Corry had offered a defiant response afterwards, declaring: “We aren’t going to fold. The winner of this group has to go five (wins) and one (loss). We’ve had our one loss.” But, in truth, few amongst the assembled press pack took him seriously and it was generally assumed that Leicester would take the path to Heineken Cup oblivion in Limerick that had previously been trodden by the likes of Gloucester and Sale.
Little by little, however, Leicester’s campaign caught fire. As well as fighting strongly for Premiership and EDF Energy Anglo-Welsh Cup honours, Corry’s side reeled off four consecutive Heineken Cup victories over Cardiff Blues and Bourgoin to lie just three points behind Munster with only the final visit to Ireland to come. Moreover, their try-scoring rate was superior, so they departed for the Emerald Isle knowing victory by any margin would probably win the Pool. It was dare-to-dream time and Tigers head coach Pat Howard upped the ante, as any self-respecting Aussie would, by labelling Thomond Park, arguably Ireland’s most iconic rugby ground, as “just another field.”
“Thomond Park had that aura about but we thought we could do something special that week,” recalls Ollie Smith, the Lions and England centre, who, though he did not know it at the time, would play the entire match with a broken foot. “I’d injured my foot against Cardiff the week before but just took painkillers and got on with it. I remember Pat Howard drumming it into us all week that, at the end of the day, Thomond was just a rugby pitch – 100×65 like any other – and that there’d be 15 blokes wearing red and 15 blokes wearing green and that your focus had to be on being better than the bloke opposite you. If more of our guys were better, we wouldn’t be far off.


“It was all about defiance, really. We went over there knowing we had to win to get out of the group, that they’d got this ridiculous home record and that all the talk was how it was impossible for us to win. But there was real commitment to the cause from our guys and a real belief that we could do it. It wasn’t arrogance, we respected Munster, but we just went after them right from the off and there were huge scrums and people flying into rucks with complete disregard for their body. We went out to silence the crowd, get stuck in and say, ‘Here you are, we’re here and if you want to keep your record you’re going to have to go a long way and put in a big performance.”
On a foul, rainswept, freezing evening – perfect conditions for the home side given their history, one thought – Ian Humphreys and O’Gara swapped penalties before Leicester’s Geordan Murphy struck the first major blow by capitalising on a break from Lewis Moody to score the opening try. O’Gara struck again but, improbably given they had elected to kick into the gale, Tigers led 8-6 at the break. “Sometimes those conditions help,” says Smith. “We got the early lead and managed to stay ahead. We had excellent leaders throughout the side and knew at half-time we could win.”
Munster sought a response but Tigers remained defiant and the defining moments of the game arrived as the clock ticked towards the 65th minute. Having been awarded a penalty within sight of the posts, Munster captain Paul O’Connell produced a rare error of judgement by opting to scrum. But with Julian White in fine form that was always a risky strategy and, having forced the turnover, Leicester mounted a rare breakout which would lead to Smith’s try that sealed the game. He recalls: “If you wanted someone to scrummage, there was no one better than Julian at the time and all I can remember is us winning the ball, going up field and then pulling off some sort of basic phase move, from which I managed to bounce through a tackle and get a run on the outside.
“I remember running at the corner thinking, ‘Do I try to slide in or cut back inside?’ In the end I cut back inside and was half-tackled by Denis Leamy, but thankfully I had enough momentum and got the ball down. Pat wasn’t too happy afterwards because I didn’t have much of a side-step and he wanted to know what the hell I was thinking of, but we got the win at the end of a brutal game in which we showed some old-school Leicester physicality. For 80 minutes it was like being in hell and at the end we thought we were going to be lynched by the Munster fans. But they stayed to applaud us off, which was typical of the brilliant supporters they have over there.”
Leicester had achieved the impossible and would go on to reach the final after defeating Stade Francais and Llanelli. Sadly, their dream of a third Heineken Cup success, and with it an incredible European and domestic ‘treble,’  ended when they were defeated by Wasps at Twickenham. But they would be amply compensated with Premiership and Anglo-Cup success and, broken foot or not, Smith enjoyed his long evening in Limerick. “Win or lose, on the booze and it was one of my favourite memories at Leicester. To win away in Europe was always big and to win in Munster’s Thomond Park citadel was fantastic. It was one of those evenings you never forget.”
NEALE HARVEY
*This article was first published in The Rugby Paper on August 3.