Gloucester head coach Johan Ackermann tells NEALE HARVEY how he is tackling the task of bringing top silverware to the long-suffering Kingsholm faithful.


How did you manage to attract Cipriani?
It became clear that he wasn’t going to stay at Wasps and when we started to talk to his agent the reality was he still wanted to play at the World Cup – and for that he had to stay in England. I told him it was important for him to understand that there is competition in the group but if he’s hungry to succeed we are a club that’s got a desire to perform, get better and become more consistent. We believe he can be a big part of our change at Gloucester. We’ve changed the badge, the pitch, the coach and a few players, so it’s a great chance for him to be part of making Gloucester become successful.
The flipside is that Cipriani’s arrival, allied to the presence of Owen Williams, led Billy Burns to head for Ulster. Disappointed?
I am because it wasn’t originally foreseen that he would go. I do understand his point of view but I can never guarantee players games. All I could do with Billy was advise him that he knew what he’d get here – an environment he knows that has ambition – but only he could make a choice of where to play. I can never promise a player five, ten or 15 games so Billy was scared he wasn’t going to play a lot and that influenced his decision. It was logic that when he got the opportunity to play for Ulster, where he will probably be the starting No.10 and push hard for an Ireland place, he would take it. We didn’t want to prevent him from having the dream of an Ireland future so I wish him well.
Is Franco Mostert definitely coming? There have been a few murmurs about him staying in South Africa.
According to me he’s definitely coming! I’ve been in conversation with him over the last few weeks and there’s been no indication he’s not coming. We’re looking forward to seeing him but obviously he’s been playing too well because he’s been heavily involved with the Springboks.

Grobler obviously had his drugs issue a few years back… is it a clean slate for him now?
It’s water under the bridge. It’s a mistake he made, he paid his dues and funnily enough he’s the first guy who got tested when he arrived! The testers are certainly not going to leave him out but he must get on with his career and we’ll back him and give him the platform to perform because he’s a very talented player. He’s a strong boy mentally and to get through that suspension you have to believe in your potential.
Your old club, the Lions, reached another Super Rugby final. Proud that your culture survived?
Extremely proud. I’m always asked if there’ll be any regrets if they lift a trophy, but not at all because they’d deserve it. To play three straight years in the Super Rugby final you have to be doing something right and they’ve backed up the new coach, Swys de Bruin. I remember when we were at the Lions in 2011, 2012 and 2013 and no kids would want to join us because things were so bad. But that’s all changed and they have great young players coming through now, which I’m tremendously proud of.
Do you ever reflect that had you stayed at the Lions you might have been South Africa’s head coach now?
No. During 2017 when Allister Coetzee was being heavily criticised after the loss to Italy and other bad results, there was a whole period from December to March before I made my decision to come to Gloucester and there was already talk of Rassie Erasmus taking over. My phone didn’t ring once, nor did I get a message to ask whether it was something I’d consider, even as an assistant. I had no communication with anyone from SA Rugby and could only make decisions around what was on the table, which was stay with the Lions or go to Gloucester.
How do you rate the job Rassie’s done so far?
Wherever he’s been he’s made a difference. I played with Rassie and he was the first guy, along with Victor Matfield, who would sit for hours behind the old video machine and analyse teams and tactics. He was ahead of his time and he proves it wherever he goes. He immediately gets improvement in performance and we saw it again with the Springboks beating England. Rassie’s managed to get the protocols changed so he can select anybody and, whilst only time will tell, there’s no reason why we can’t perform well in the Rugby Championship against the All Blacks. He’s getting the best players again, which is great news for the World Cup.
If ever it came, would you relish a crack at the Springboks job one day?
Being honest, yes. South Africa’s obviously close to your heart and when you’ve played for your country, as I have, you would always be interested if the opportunity ever presented itself. You always aspire to play at the highest level and it’s no different as a coach. Whether it’s with South Africa or another team, coaching at international level is something I’d love to do one day.

Back to Gloucester, what type of culture are you trying to create?
A culture of unity. I want players to walk away from Gloucester thinking, ‘I worked hard, we had tough times, but I made lifetime mates and we were committed to the cause and came through’. That can only be done if you create an environment where players are treated with respect but also respect each other.
Looking around the league, would you say Exeter and Saracens are the cultural market leaders?
No doubt. Speaking to guys like Schalk Burger, Schalk Brits, Michael Rhodes and Bradley Barritt at Saracens, you get the feeling that’s why they perform – and it’s the same at Exeter. Then again, the secret of these two teams as well is their squads don’t change much and neither does their management. If you’re going to chop and change the coach every second year and make 10-15 changes in your squad, I doubt any culture will get into you. Self-belief grows from stability, especially if you start being successful.
You’ve brought in a few South Africans, but are you still committed to Gloucester’s academy?
I’m hoping they’ll get a chance and show me what they can do. There are four or five guys I’ve spoken to and told them I want them to challenge for starting positions. If they tag themselves as academy players it’s their fault, but I don’t want guys like Charlie Chapman, Henry Walker, Ciaran Knight, Alex Seville and others to stand back and give senior guys a free ride to their starting positions.
Aside from Cipriani, no other Gloucester player was named in the England training squad. That surely needs to change?
It would be great for Gloucester to have more people in there, but I always say to players they must realise it’s the team that’s going to get them there. If we don’t perform or are hanging around 10th place and not challenging for honours, we’re not doing individuals any favours. We have to perform well and then hopefully guys like Ben Vellacott, Jason Woodward, Henry Trinder and others can push through. 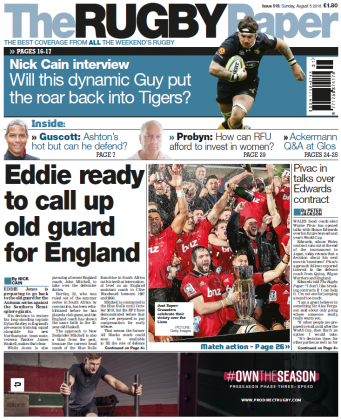