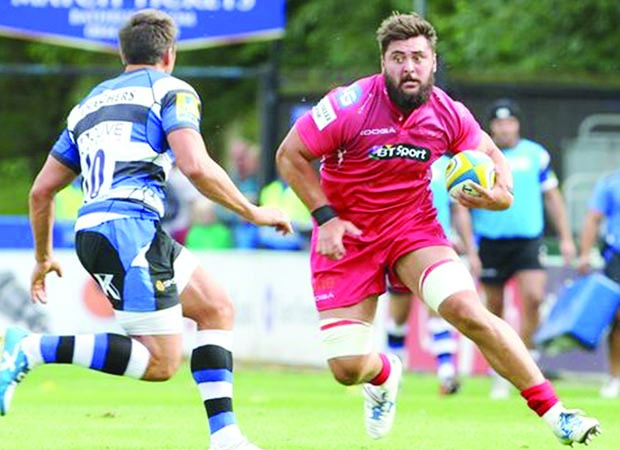 Rory Pitman is loving his new life in Jersey but the big Welsh No.8 has revealed he needed the help of mental health specialists only a few months ago after his release from the Scarlets sent him tumbling last summer.
A regular barnstorming performer from the back of the Scarlets scrum in the 2014-15 season, Pitman had his sights on higher honours before a torn bicep cut short his following campaign. That’s when he discovered how brutal professional sport can be.
The Scarlets released him and, after a failed attempt to rekindle his spark at Ebbw Vale at the beginning of last season, he pulled the plug.
At just 27, Pitman had been spat out of the game as quickly as he rose to the top. For a proud Welshman standing at 6ft 5in and weighing over 19st, it was not easy to take.
Talking exclusively to The Rugby Paper, Pitman said: “Nobody prepares you how to cope when you’re dropped. It’s the hardest thing I’ve ever had to overcome.
“Everything was going great at the Scarlets. I was picking up man of match awards playing the biggest games around – but it was one thing after another after that. I tore my bicep and then picked up a pectoral injury.
“Clubs are paying you to be fit so the relationship deteriorated. In the end they released me and it went downhill from there.
“I played for Ebbw Vale a few times but it wasn’t for me. I have nothing against them or the Welsh Premiership but having played in the PRO12 since I was 17 in front of thousands of fans   it was hard to get motivated to play at the level below.
“I was only 27 and I knew I had more in me. I was selling myself short so I decided to take some time off. It allowed me to give my body some rest but most importantly to get myself in a better place mentally.
“I went to see a psychologist and I also had a great support network with friends and family. Being able to speak to people about how I was feeling was what pulled me through.
“It wasn’t easy to admit I was struggling to cope with it all but it’s important people understand rugby players are not just commodities for the club to use and dispose of as they wish.
“We’re human and sometimes it doesn’t hurt to admit we need to talk to someone.
“Mental health issues are not easy to talk about in a physical sport like rugby. It needs to become more acceptable to talk about it like it can be in football and the more people understand this is going on the better for everyone.”
Feeling refreshed, Pitman looked for an opportunity away from Wales and a phone call from Harvey Biljon, below, convinced him Jersey was the place to make his comeback.
He added: “It was hard to walk around Wales and have people constantly asking me why I wasn’t playing. That’s why I had to get away from it and restart playing abroad.
“I had a phone call with Harvey and had a few other options in England and France but I decided coming to the Championship and earning my stripes again was the way to go about my return.
“I know how good I can be; I proved it in the past. Now it’s up to me stay injury free and actually do it.
“Pre-season has been a tough slog after my break but I’m really enjoying it.  I’m pretty much where I was but the games will be the real test.
“I used to struggle to get out of bed on Sunday because I either didn’t want to or just couldn’t because of my arm. Now I’m looking forward to being in the same position but it’ll be because I’m bruised from the Saturday game. I’ve missed it so much.”
NICK VERDIER