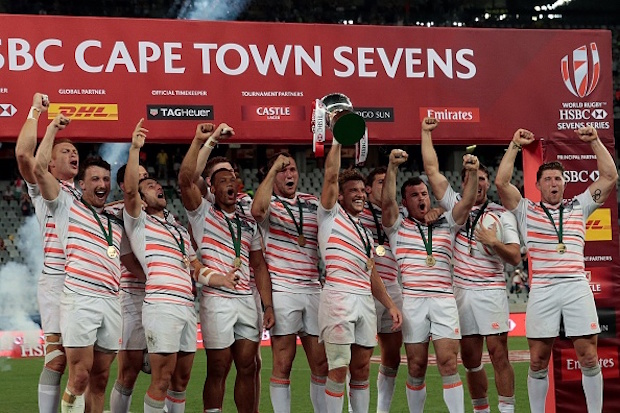 Three tries from England stunned the Cape Town crowd as Simon Amor’s men beat South Africa 17-19 in the HSBC World Rugby Sevens Series Cup final.
Captain Tom Mitchell said: “It has been a hell of a tough tournament. I am so proud of the boys. It was an amazing effort, we trained so hard over the summer and this moment makes it all worth it.
“Picking up bronze last weekend, we were a bit disappointed with some of our performances so really wanted to put that right and it’s been a bit of a bumpy road, sevens usually is, but to turn out like that against a very strong South Africa side in front of an amazing crowd was amazing. It has been a pleasure to play in this stadium.
“We are very fortunate that we get a lot of support around the world and it means a lot to us, we are really proud to have the fans supporting us and we want to do them proud in return. Thank you very much to everyone who turned out here or watched back home.”
Chris Dry got the Blitzboks on the score sheet first, finishing off a well-worked move from halfway to touchdown in the corner, Branco du Preez’s conversion was unsuccessful however.
England hit back immediately though, through Richard de Carpentier, who took a line off of Dan Bibby to charge half the pitch and dot down under the sticks. Mitchell’s successful conversion gave England a 5-7 lead.
Simon Amor’s men then regained possession from kick-off, working it from side-to-side until Dan Norton touched down out wide for his 225th career try. Mitchell missed the conversion and England finished the first-half 5-12 up.
Rosko Specman put the hosts back on level terms early in the second stanza, but England replied, hacking the ball down field and earning a scrum ten metres from the South African line.
The platform it gave enabled Ruaridh McConnochie, below, to cross the whitewash after sustained pressure led to space on the left flank. Mitchell extended his side’s lead by converting the wide kick, 12-19.
A yellow card for Norton for a high tackle gave South Africa a one man advantage with 15 seconds remaining, and Werner Kok utilised the space, to score in the corner. Justin Geduld was unable to add the extra two points however, and handed England the win. 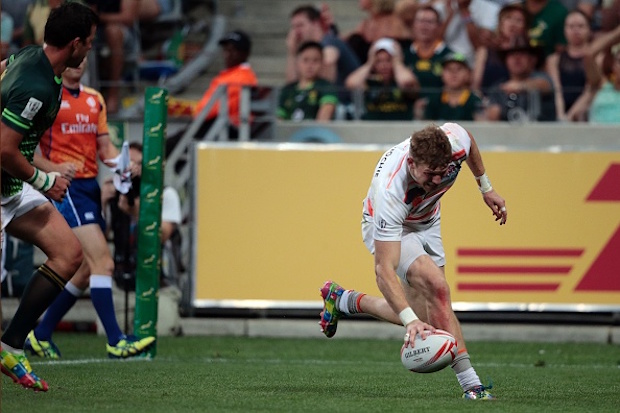 Earlier, England scored five tries en route to a 33-14 triumph over Scotland in the HSBC World Rugby Sevens Series cup semi-final in Cape Town.
Simon Amor’s side struck first through Dan Norton, who was given a one-on-one pass by captain Tom Mitchell after three minutes. He went over for his 224th career try.
One minute later, England capitalised from a Scotland mistake at a lineout five metres from their own line. Charlie Hayter rolled directly under the posts and Mitchell converted to give his side a 0-14 lead.
Continued pressure from England allowed Hayter to score again shortly after, when Dan Bibby drew two Scottish defenders on the left flank to see Hayter go in unopposed.
A well weighted kick from Scott Wight in the last play of the first-half bounced into the hands of Mark Robertson, who dotted down, the successful conversion that followed made it 7-19.
England’s Ollie Lindsay-Hague scored his first try of the tournament three minutes into the second stanza, after scrappy Scottish interplay gave Richard de Carpentier possession. The 26-year-old simply had to draw the only Scottish defender and pass.
A stable set-piece then saw England string phases together, before Ethan Waddleton became the benefactor of England’s fifth try, to make it 7-33
James Fleming scored a consolation try for the Scots in the lat play of the game to make it 14-33, but England progressed into the cup final.
Earlier in the day, Norton scored in extra time as England beat Fiji 26-31 in the cup quarter-final, avenging last weekend’s semi-final loss in Dubai.

England allowed Fiji to score early through Sevuloni Moceinacagi, Jerry Tuwai and Joeli Lutumailagi to take a 19-0 advantage.
But with moments to go in the first-half, a well weighted cross-field kick was collected by Phil Burgess, who offloaded for Alex Davis to sprint in and score his 17th career try.
Burgess then benefited himself from well-worked hands to cross the whitewash in the final play of the first-half and reduce the score to 19-14.
Lutumailagi scored early in the second half, but England answered back through a solo effort from Richard de Carpentier, who showed great strength to bulldozer over from short distance.
With no time left on the clock, Ruaridh McConnochie then scored to level the game at 26-26, and Mitchell’s missed conversion forced extra time.
Dan Norton, who surpassed Ben Gollings as England’s top try-scorer yesterday, showed clever footwork and blistering speed in extra time, to scorch down the left flank and claim his 223rd career try – sending England into the cup semi-final.