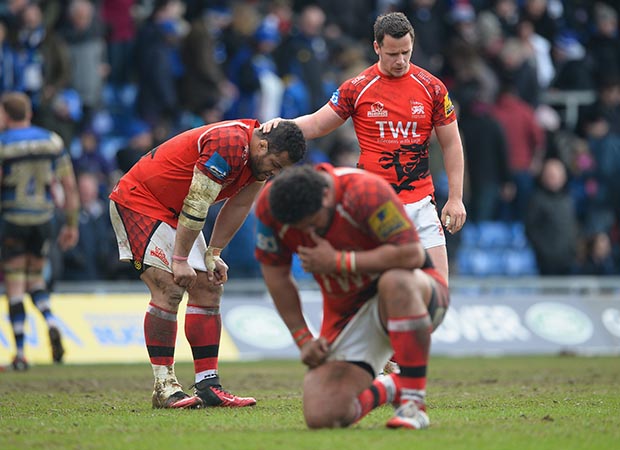 London Welsh’s players face an uncertain future after new chairman Gareth Hawkins revealed the troubled club are abandoning their Premiership dream.
Hawkins, who took charge after Bleddyn Phillips stepped down from the role earlier this month, declared the days of reckless spending are over as he outlined plans for the Exiles to become a sustainable, community club.
In October, an HMRC winding-up order for unpaid taxes of £250,000 was deferred until December 12, which will be Welsh’s fourth visit to the High Court this year.
The club survived winding-up petitions in April and September, after which Phillips claimed funds from a ‘major Californian-based investment group were awaiting approval by the RFU’.
No such funding materialised, nor were the RFU approached regarding a takeover, leading members of London Welsh’s amateur section, led by Hawkins, to take matters into their own hands amid concerns over the club’s viability.
If Welsh survive, Hawkins promises the club will take a different direction, citing National One part-timers Blackheath as a role model.
Hawkins told The Rugby Paper: “Our problem at the moment is negotiating the journey between where we are and where we want to be. We’ve got a big cash-flow hump over the next three weeks, but after that we can cut our costs.
“To be a good Championship side is perfectly credible for us but I also know we need to be a sustainable community club. I use Blackheath as an example because they are a great club with a sustainable model we can follow.”
Cost-cutting will lead to job losses among Welsh’s full-time playing squad.
Hawkins explained: “If you have 30 people earning between £40,000 and £50,000-a-year – and our wages are quite high compared with the rest of the Championship – you can’t sustain it.
“It’s a transitory thing, you rarely keep the same 30 players from one year to the next, so the model will change and if that means borrowing academy players or bringing through your own, that will lower our costs significantly.”
Having twice been to the top-flight and back in the last five years, Hawkins describes London Welsh’s dalliance with the Premiership as “bonkers”.
Former director and benefactor Kelvin Bryon ploughed £20m into funding the Premiership dream, but Hawkins insists those days are over. He added: “We knew the benefactor model was coming to an end and the investment proposal was failing, and over 25 years Lon don Welsh have failed to build a commercial infrastructure.
“We’re not stupid people, some of us in the amateur club can see the club is heading for the cliffs, so we’re determined to sort it out.”
NEALE HARVEY