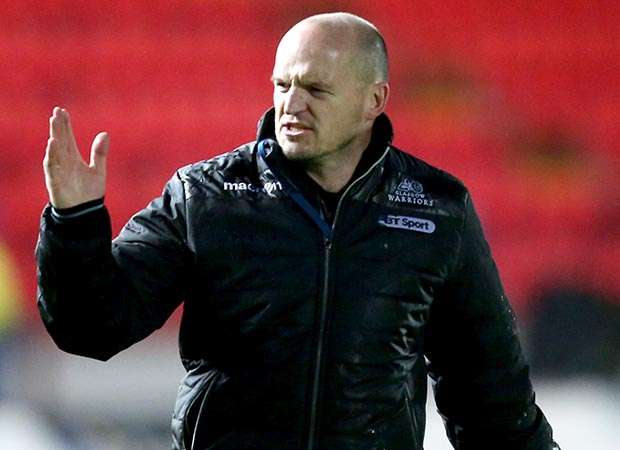 Gregor Townsend has blasted critics of the Guinness Pro12 and insists the league is of superior quality to both the Premiership and Top14.
Scotland-boss-in-waiting Townsend’s fighting talk comes on the back of heavy criticism of the Celtic-Italian competition, including that of SRU chief executive, Mark Dodson, who reckons the league’s future is “bleak” if the financial gap with England and France cannot be bridged.
Plans to tap into the North American TV market are ongoing, but for now Glasgow head coach Townsend is confident playing standards will continue to rise.
He told The Rugby Paper: “We’re competing all the time with other sports and competitions to attract supporters, but the league itself has come on leaps and bounds.
“My last Borders game was in 2007. The league wasn’t great and crowds weren’t good but progress over the last four or five years has been fantastic.
“Ulster are selling out a big, refurbished stadium; Munster moved into a bigger stadium; Leinster are redeveloping theirs; and you’ve seen the rise of Connacht and Glasgow. Both are developing their grounds and selling out.
“Supporters are backing it and having a big sponsor like Guinness for another four years is another great indicator that they’re happy with the progress.
“But probably the most important thing is the product. Some of the Pro12 rugby last season was brilliant – and I watch a lot!
“I watch Top14 and Aviva Premiership and in terms of quality and ambition, I believe the Pro12 surpasses them. You saw that with Connacht last year in how they played, where it was aggressive defence but really playing to space, and it was a brilliant final against Leinster in front of a huge crowd.
“We know we’re a relatively new league and it’s only six years since the Italians joined, but I think the improvement is showing every year and there’ll be a lot more to come.”
Meanwhile, Townsend insists his impending appointment as Scotland boss next summer will not detract from Glasgow’s Pro12 title drive.
He said: “I’m really honoured that the national job is there in a year’s time but I’m totally focused on making Glasgow better.
“It’s going to be a hard year given our opening and being pooled with Racing, Munster and Leicester in the Champions Cup, but the group I’ve got are capable of beating the best in Europe.”
Townsend, whose Glasgow outfit have reached the play-offs in each of the last five seasons, reckons Ireland’s challenge will again be fierce.
But he predicts a Welsh revival, adding: “Cardiff were probably the form side over the last two months of the season and they’ve added really good players in Nick Williams (ex-Ulster) and Willis Halaholo (Hurricanes).
“Danny Wilson’s doing a really good job on the coaching side there so I think they’ll be strong.
“Ospreys were affected by the World Cup more than any other team so they’ll be much better for having their full squad while the Scarlets could have practically the best backline in Europe.”
NEALE HARVEY