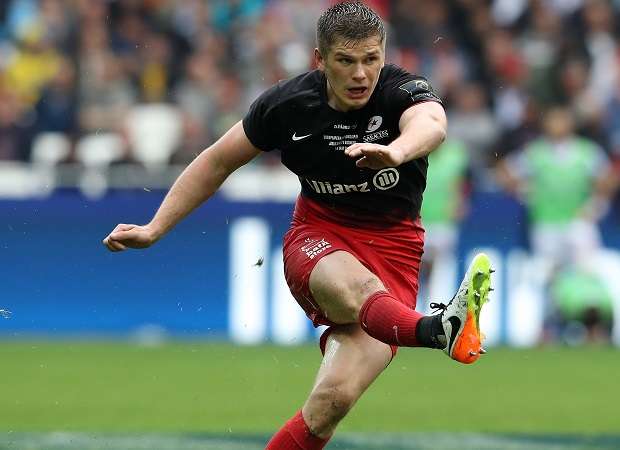 Owen Farrell is a “champion player” who is on track to emulate the achievements of Jonny Wilkinson, according to former England and Lions wing Ugo Monye.
Farrell’s dead-eyed kicking display under intense pressure proved too much for Racing 92 last weekend, with the 24-year-old’s perfect seven from seven securing a first Champions Cup victory for Saracens in rain-swept Lyon.
Monye believes Farrell is destined for greatness, telling TRP: “First and foremost, Owen is completely unflappable. He’s a champion player. A born winner.
“He’s never fazed. In every post-match interview, every interview going into a game, you can see it. Even in celebrations, he’s not one to be there first with the trophy.
“In a personality sense he’s just like Jonny Wilkinson. Wilko never wanted to be the centre of attention, never wanted to be, ‘look at me with the trophy doing ten laps of honour’. Owen is the same, he’s focussed on the next process and is a team player.
“His kicking, his defence, his aura on the pitch and what he does for Saracens is incredible. He’s the best No.10 in England and he’s really developed his game.”
While George Ford wore England’s fly-half jersey during the Six Nations, Monye believes Farrell can reclaim the pivotal role after his spell at inside-centre.
He added: “Owen’s on the right path to emulate Wilko. He’s got that same steel and there’s a reason why he kicked for England during the Six Nations.
“When you look at Wilko, what did he bring? It was an aura, consistency, professionalism and kicking and defensive ability. Owen has all that and he’s getting better.
“Is he up there with Wilko yet? No, we’re talking about one of the greatest sportsmen the world has ever seen, but he’s certainly making all the right steps.
“Owen’s in his early 20s, he’s a Grand Slam winner, a British Lions winner, a Premiership winner and now a European Cup winner. That’s not by accident, it’s through sheer hard work and it’ll take a lot to keep him out of that England No.10 shirt.”
Meanwhile, Monye believes Chris Ashton deserves another shot at reclaiming an England wing slot after helping Sarries become European champions.
Ashton was named in England’s Six Nations squad but missed out because of suspension.
Monye said: “There are many attributes you need as a wing at international level, but primarily you’ve got to be a try-scorer, be able to defend and you’ve got to be confident.
“Chris is all of those things and he’s one of the most selfless wingers around. He can run for 80 minutes without changing gear and it’s amazing the amount of work he does.
“Last Saturday against Racing, we saw that in his kick-chase and the knock-on effect that has on the rest of the team is incredible.
“People talk about back rowers who put their heads in where it hurts… well, we’re seeing it with wingers as well and Chris is up there with the best.
“Someone like that gives you so much energy and belief and while Anthony Watson and Jack Nowell are playing well, Chris has to be in the mix.”
NEALE HARVEY