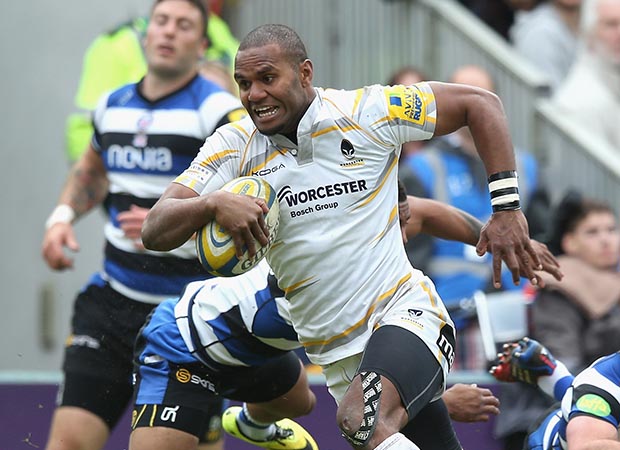 After a season to forget with Worcester Josh Drauniniu returns to London Welsh with one goal, to play rugby again.
The winger, 29, spent the last four seasons at Sixways and started each of the 53 games he played in during the first three, scoring 24 tries on the way.
But, following the arrivals of Tom Biggs and Sam Smith last season, coupled with a knee injury, the former England Sevens star was not used by Dean Ryan in the Championship last season.
Keen to prove he still has what it takes, Drauniniu is looking to help the Exiles return to the Premiership at the first time of asking.
“I’ve just finished my second week of pre-season and everything is going to plan. The mood in camp is good and I can’t wait for the season to start,” he told TRP.
“I want to prove to myself I’m still good enough to play at this level and coming back to Welsh is the challenge I needed. They’ve been great to me in the past and I’m looking forward to playing rugby again. I can’t wait to be sore on Sunday mornings.
“I want to win something tangible for myself, too. I didn’t feature in any Championship games last season so I don’t feel like I’ve won promotion.
“Last season was very disappointing for London Welsh not getting a win but they’ve reassembled well to, hopefully, return to the Premier- ship straight away.
“The guys who were here last season seem to have put it behind them and they’re eager to win games again.”
Following their second relegation in three seasons, the Exiles’ squad has once again seen a lot of movement with 15 new players arriving and 23 leaving over the summer.
Something that will not be new for Drauniniu, however, are the surroundings after it was confirmed the club will return to Old Deer Park next season after three years playing home games at the Kassam Stadium in Oxford.
He added: “Being back at Old Deer Park is great. I love that place. I love the proximity between the fans and the pitch. You can hear everything they say.
“I played at the Kassam against Welsh with Worcester and I didn’t really like it. I much prefer Old Deer Park than bigger stadia. It is the club’s spiritual home, too, so there’s a sentimental value for everyone.
“I think I’ve come back to a new club. There are only three players in the squad that I recognise – the Lewis twins, Rob and James, and club captain Matt Corker.
“There has been a lot of changes and it looks like a rejuvenated club.
“I’m confident we can gel quickly as a team and push on. But we know it won’t be easy with the likes of Yorkshire Carnegie and Bristol also chasing promotion.”
NICK VERDIER